I came across a poignant little tale yesterday, languishing in a forgotten volume of history on the reign of the Roman emperor Theodosius II (A.D. 401-450).  The book is the Chronographia of the ecclesiastical historian John Malalas (c. 491-578).

The wife of Theodosius was a beautiful and vigorous woman named Aelia Eudocia (c. 401-460).  She was a learned and capable empress, even producing literary works of merit in their own right.  Naturally such a personality had a zest for life, and all it had to offer.  Like the learned Hypatia of Alexandria, who also combined potent feminine charms with regal bearing, the empress attracted both intense admiration and repressed resentment.  This tragic story is related about Eudocia.

One day the emperor Theodosius was on his way to visit a church during the Feast of the Epiphany with his retinue.  A citizen who approached him gave the emperor as a gift a Phrygian apple that was extremely large.  The emperor’s entourage were impressed by this oddity.  The citizen was awarded with a sum of money (150 nomismata) for his trouble.  Theodosius sent the apple to the empress Eudocia.  Eudocia, in turn, sent the large apple to her favorite, Paulinus, who also happened to be the emperor’s magister officiorum (master of offices), which was a top government rank.

We should note here that in old Greek culture, the gift of an apple from a woman to a man was a symbol of love.  The woman who bestowed such a gift on a man did so to communicate special feeling.  Paulinus, we should also mention, was a very handsome man and long-time friend of Theodosius from childhood.  Paulinus did not know that the apple he received from Eudocia had originally come from Theodosius.  He therefore gave it to the emperor, who recognized it immediately.  This act sealed his fate.

Theodosius concealed the apple and approached Eudocia; he then began to question her about the apple.  “Where is the apple?  What has happened to it?” he asked her.  “I ate it,” was Eudocia’s reply.  He asked her to swear to the truth of her statement, to swear that she did not give it to any man, and she swore that it was true.  The emperor then produced the hidden apple, proving her to have lied.  Thus were the seeds of suspicion sown in his mind about the nature of the relationship between Eudocia and his friend and minister Paulinus.  Rumors of their liaison swirled around the court.  Eventually, he had Paulinus executed in A.D. 444. 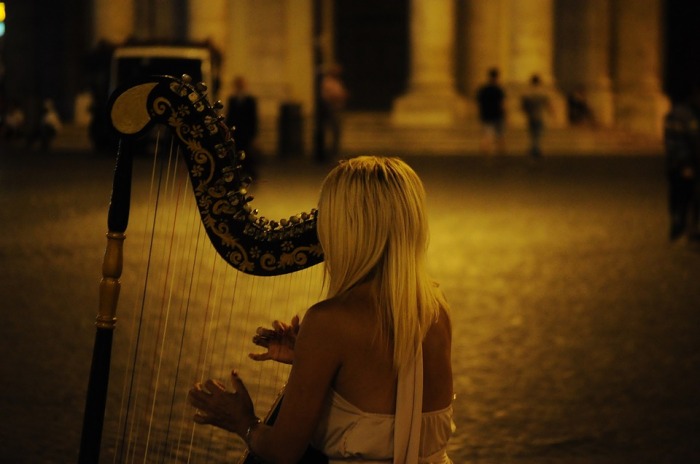 Everyone knew that Paulinus had been put to death on account of Eudocia.  In grief and mourning, she left Constantinople to pray and work in Jerusalem.  She retained her rights as empress, but focused her energies on social work.  Her work was so successful and effective in Jerusalem that again the jealousies of Theodosius were aroused.  He sent one of his men, named Saturninus, to probe into the activities of Eudocia in Jerusalem.  Saturninus even had two close confidants of the empress, priests named Severus and John, slain.

But Eudocia took her revenge on Saturninus by causing him to be assassinated soon after this.  She spent the remainder of her life in charitable and religious work in the Jerusalem area.  Theodosius made no further effort to monitor her.

The turbulent passions of men and women provide a rich tapestry to adorn the walls of historical chronicles; and the fates of us all are woven into this rich brocade.

4 thoughts on “The Apple Of Empress Eudocia”