In the year 530 the Eastern Roman (i.e., Byzantine) Empire was engaged in a limited frontier war with its traditional enemy, the Sassanid Persians.  The two great empires had a long history of border clashes, as each constantly was testing the resolution of the other.  One of the engagements that took place in this year was the Battle of Dara, and it was fought in what is now eastern Georgia in the Caucasus mountains.

An anecdote is told about the battle by the historian Procopius (I.13).  At the beginning of the battle, the forces of both the Persians and the Romans were content to remain in fixed positions.  One Persian soldier rode out in front of the Roman defenses, seeking to engage the enemy commander in one-on-one combat.  But no one would take him up on his proposition.

No one, that is, except one man named Andreas.  This unknown combatant was not even a professional soldier.  Procopius tells us that he was an attendant of one of the Roman generals whose name was Bouzes.  Andreas was the proprietor of a wrestling school and gymnasium in the city of Byzantium; he had been brought along on the campaign as a kind of “personal trainer” for the top Roman generals. 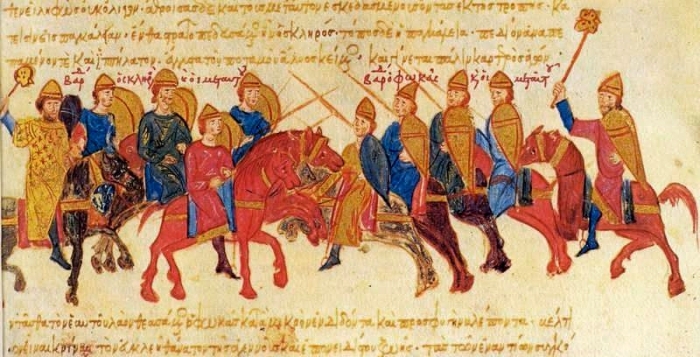 He accepted the Persian’s challenge.  “This man alone had the courage, without being ordered by Bouzes or anyone else, to go out of his own accord to meet the man in single combat,” as Procopius relates it.  The historian does not speculate on the reason.  Perhaps Andreas was offended by the arrogance of the enemy soldier; perhaps he was bored with the heat and flies of the area and needed some way to relieve the tedium.  We do not know.  Men in action have their own reasons for doing what they do, about which we cannot presume to speculate.

So Andreas accepted the challenge.  Then he walked up to the surprised Persian–mounted on his horse–and drove his spear into his right breast.  He tumbled down from his saddle.  And while he was writhing on the ground, Andreas drew a dagger and “slew him like a sacrificial animal as he lay on his back, and a mighty shout was raised both from the city wall [of Dara] and the Roman army.”

Now the Persians were incensed at this outcome, and sent another of their champions against the Romans to try to make good the situation.  This man was strong and large, but not as young as the first Persian; grey hair had started to appear around his temples.  He also rode in front of the Roman positions, waving a whip, and challenging another of their number to personal combat.  And here again Andreas accepted the man’s challenge when no one else would.  He had to do this secretly, as another general named Hermogenes had told him not to engage in such fights.

The Persian and Andreas were both on horseback, and charged each other with lances ready.  Each lance struck the breast-plate of the other, and both were deflected.  The riders were hurled from their mounts and fell to the earth with great commotion.  The two horses collided bodily and also fell to the ground.  Andreas and his opponent both tried to get back on their feet, knowing that speed in doing so would ensure survival.

But Andreas was more agile and flexible than the Persian, and he recovered himself with great speed.  As his enemy was on one knee, Andreas drove his spear into him, wounding him mortally.  And then

A roar went up from the wall and the Roman army, as great, if not greater, than before.  The Persians broke their phalanx and withdrew to Ammodios, while the Romans, raising the paean, went inside the walls; for already it was growing dark.  Thus both armies passed the night. [trans. by A. Kaldellis]

This was how Andreas, the wrestler with no military experience, accepted the challenge of personal combat and killed two of the enemy host.