Skip to content
HomeA Letter To A Graduate Student 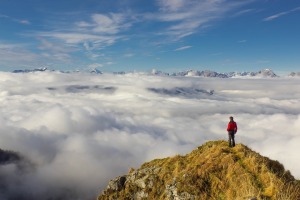 I recently received an email that asked the following:

I’m very curious as to how you handle inner conflict when it comes to doing something that you know it’s bullshit and you are just doing it because you feel pressured to do it.  Recently I’ve been trying to apply for post-graduate degree and I filled in my CV and personal statement with so much bullshit that probably resembles Hillary Clinton’s truthfulness. On top of that I’m studying courses in university that I have zero interest in because my parents were totally convinced that education is top priority for me like all other kids.

How do I suck it up until I’m able to do my own thing in the future and how do I find a healthy way of releasing the stress that my gut is flushing my body with every time I do this kind of school work?

Sometimes this analogy is appropriate when giving advice.  The first thing I would say is:  go easy on your parents.  What do you expect them to tell you?  To be a professional loafer?  If they are “totally convinced” that education is a top priority, then they can’t be all bad or completely deluded.  Why?  Because education is indeed a top priority.  Of course you have to navigate the waters to find the best options for yourself.  And if you think education is expensive–as the saying goes–try ignorance.  I don’t subscribe to the school of thought that some people preach on this subject.  “College is worthless!”  “Abandon school!”  “Live off your laptop in Dorkistan like me and sell vitamins!”  No.  That is what gets you a one-way ticket to Dorksville.

Yes, maybe there are some people who do this and hit paydirt.  Chances are you won’t be one of them.  Anyone who thinks education is worthless should try hanging sheet rock for a living, or driving a cab.  See how long it takes before you grow weary of that life.  And this really is the point.  Nothing is perfect.  Nothing is even half-perfect.  There are kernels of perfection here and there in life, embedded like raisins in a pudding.  But for the most part, you will find the routine chores of existence.  In everything.

The sooner you realize life is not about fun and games, the better.  Life is not about traipsing from one “fun” place to another.  This is how fools and effeminate shirkers think.  You were not put on this earth to have fun.  You were put here to build something with your life, to make a mark, to scratch your name on the Wall of Collective Memory.  Yes, you will have some fun here and there.  I am not against fun:  I love it and savor it.

But your thought should be focused more on (1) your duties and responsibilities, and (2) your soul.  As things are right now, you are focusing too much on discomfort and pain you will have to endure.  In your eagerness to avoid the pain of work, you are forgetting that it is that very pain that gives you the strength to succeed in life as you get older.  It starts now.  He who has the most endurance, wins.

To achieve your goal of graduating, yes, you will have to swallow your bitterness and bile and absorb the pain.  This is how these things are.  But what are your options?  Join the ranks of all the other clowns and dunces who gave up because they weren’t having “fun” from dawn till dusk?  If this is not the right path for you, the universe will let you know in good time.  The world will teach you.  The world will tell you.  But that time has not yet arrived.

No intelligent person really knows what he wants to do until relatively late in life.  Focus on your soul, your spirit, your duties.  Nothing worthwhile was ever gained except through the most brutal struggle.  Your society in which you were raised never told you this; or if it did, it did not drill the point home well enough.  In Chapter 6 of Thirty-Seven, I wrote these lines:

The world is a palestra of anxieties,

A spectacle of wrongs and iniquities,

And a vale of tears watering the rising

Orchids of our discontent.

It is a threshing floor of temptations for the unwary,

And a churning sea, turbid with the color

Of false hopes and virtues so inadequate

In duration and amplitude.

Let me tell you a story.  The humanist Petrarch was climbing a mountain one day in the Alps with his brother.  The mountain was located near Malaucène  in France.  It was not easy, as the mountain is steep and inaccessible.  They came upon an old shepherd in the mountain; he tried to talk them out of reaching the summit.  He told Petrarch that he had made the ascent fifty years earlier and had come back with nothing except torn clothing and an exhausted body.  But the young men would not listen to him.  So the shepherd pointed the way to the summit, indicating a certain narrow path.

And Petrarch soon encountered real difficulties.  It was a very hard road.  He and his brother were soon torn and worn out from dealing with brambles and rocks that they could hardly continue.  So he stopped to rest in a ravine.  As he was sitting there, he said later in a letter to Dionigi of Borgo Sansepolcro,

…I forced these and other words on myself:  “What you experienced all day in climbing this mountain, know that this happens to you and many others while seeking the blessed life.  But it is not so easily noticed by men because, while the motion of the body is in the open, the movement of the soul is invisible and happens in private.  This life that we call blessed is situated in a high place; and a narrow road leads to it.  [Equidem vita quam beatam dicimus, celso loco sita est; arcta, ut aiunt, ad illam ducit via].

Many hills can be found here and there, and a man must walk from virtue to virtue with heroic strides.  At the summit is the end of everything and the final destination of the road on which our hike takes place.”  Everyone want to reach this spot, but as Ovid says, “To want something is too little; you ought to lust after what you would do.”

Petrarch then asks:  what are the things that hold us back?  The easy path:  the path through earthly and base pleasures, which promise much but deliver, in the end, so little.  He says that these thoughts inspired him to complete his journey to the summit of the mountain.  He finally reached the highest vantage point, a place the locals called the “Little Son” (Filiolum).  From this awesome crest, he could finally survey his scene in its entirety.  He says:

I was first of all moved by the unusual spirit of the air and the expansive view; I stood like one awestruck.  I looked around:  there were clouds beneath my feet.  Now Mount Olympus and Athos were less incredible to me, since I was seeing in a less well-known mountain what I had heard and read about them.  Then I turned my gaze to some parts of Italy, to which my spirit inclines.  The frozen and snow-capped Alps…

These were the thoughts that filled Petrarch’s mind.  The road is a long one, and the journey will be filled with sharp rocks, uneven terrain, and nasty brambles.  We will fall more often than we wish, and we will emerge scuffed, scratched, and battered.

But the incomparable view from the summit moves the soul to awe; it is the natural dwelling of a lofty, independent spirit that has been tempered by struggle and sacrifice.  This dwelling is its own reward, and needs no further justification.

Read On Duties today, which is available in paperback, Kindle, and audio format:

7 thoughts on “A Letter To A Graduate Student”