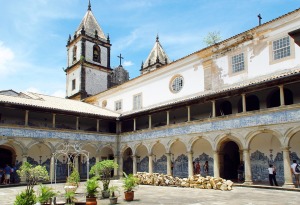 One of the most compelling figures of Portuguese history–and surely one of the greatest practitioners of its prose–was Father António Vieira, a Jesuit missionary, orator, statesman, writer, and mystic.  His career illustrates that stimulating mixture of conservative and progressive thinking that would come to characterize the Jesuit order throughout much of its history.  He was born in Lisbon in 1608 and moved to Brazil (what is now the state of Bahia) in 1614 when his father received an appointment for a government post there.

Steeping himself in classical Latin rhetoric and historiography, he quickly became a master of both the pen and the spoken word.  He took literally the exhortations of St. Augustine and the early Church fathers to do good and treat one’s fellow-man with dignity and respect; these were revolutionary ideas in an era when enforced servitude and contempt for the native Indians was considered de rigeur.  As his notoriety increased he was chosen to be part of a delegation sent to King John IV in Portugal in 1641.  John was so impressed with him that he admitted him into is inner circle, appointing him part of the Royal Council and even asking him to tutor his son.  He apparently even played a role in military planning and engagements; this was a man who could think strategically as well as theologically.

Some of the social reforms he advised the king to undertake were momentous:  curtailing the power of the Inquisition; equitable reform of the tax code to remove exemptions based on aristocratic privilege; permitting Jewish businessmen and financiers to return to the country as a commercial stimulus; and an end to archaic laws discriminating against the descendants of converted Moslems and Jews.  These ideas, of course, brought him into collision with powerful and entrenched forces.  He also argued for reforms within the Church to make theological doctrines more understandable to the layman.  All of these activities made him persona non grata in Rome and Lisbon, and he found it advisable to return to Brazil in 1652.

Once back in the New World, he undertook what would be for him a life’s mission:  convert the indigenous tribes of Brazil and the imported slaves to the Christian faith, and to try to alleviate their sufferings and exploitation by the colonial authorities as best he could.  Brazil at this time was largely terra incognita; only a strip of the coastline was truly inhabited, leaving a vast expanse of forbidding rain forest as a blank spot on the continental map.  As we described in our sketch of the life of Candido Rondon, even several centuries later the interior of Brazil was very much unexplored.  His preaching activities–i.e., attacking the practices of slave owners–in Maranhão attracted unfavorable attention from the authorities, who sent him back to Portugal in 1654.

He must have had considerable charm, for he succeeded in winning over the king once again to his doctrines.  Jesuits are not easily deterred.  He obtained official permission to go back to Brazil in 1655 and at this point undertook a missionary quest of stunning scope.  At great risk to himself, Vieira traveled hundreds of miles for six solid years in the wild interior of Brazil, making contact with tribes who had never before seen a European.  His rules forbidding the imposition of slavery in his areas of jurisdiction excited the antagonism of slave-owning colonists.  His advocacy on behalf of the natives was so effective and eloquent that his enemies conspired to deport him back to Portugal in 1661.  There a trap was waiting for him; his enemies were determined that no sympathetic monarch would intercede on his behalf.  He was arrested by the Inquisition on trumped-up charges of heresy, sedition and “operating outside his jurisdiction.”

Vieira spent two dank and fetid years in the Inquisition’s terrifying prisons.  On his release, he was made to promise not to proselytize; he then traveled to Rome in 1669 to seek an audience with Pope Clement X.  He was also–like Rene Descartes–sought out by Queen Christina of Sweden, who seemed to have a nose for seeking out men of talent and distinction.  He would have his revenge on the Inquisition in the end:  he compiled a detailed report on its abuses, venality, and corruption, and presented it to Pope Innocent XI.  The result of this damning indictment was that the Pope shut down the Portuguese Inquisition’s operations for six years from 1674.  It was not that he wanted revenge on the tribunal, for physical hardships meant little to him; rather, he sincerely believed that its conduct and policies were harming the interests of Portugal and the Church.

But there is only so much one priest can do in the corridors of power.  He returned to Bahia in Brazil in 1681 and would remain there until his death, continuing his advocacy on behalf of the poor and the exploited.  He died in Salvador in 1697, leaving a lasting impact on Portuguese prose and the history of South America.  His complete works only began to be collected, edited, and published in recent years; this massive project is expected to run to 30 thick volumes.  Vieira wrote in multiples genres, prose as well as poetry; and his letters, sermons, and papers are scattered across Brazil and various European countries.  The process of collecting and collating this material will occupy the efforts of editors for years.

But it would be difficult to conceive of project more justified, or a man so worthy of the effort.

3 thoughts on “The Life Of Father António Vieira”