Skip to content
HomeThe Moderation And Control Of Anger 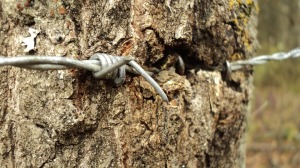 Anger is an insidious thing.  It can twine and wind its way around the soul, like ivy over some physical impediment, and slowly throttle our more beneficent instincts.  This creeping control does not happen all at once; it happens gradually, imperceptibly, one gradus at a time.  When speaking to someone on the phone, I often find my voice gradually rising with a surplus of emotion.  You can barely notice it happening, but it happens still.  Anger then finds a ready opportunity to intrude itself.  Anger is also deceptive:  it makes us believe we are taking action to solve some problem, when in fact we are doing nothing to solve the problem.  Anger is a liar.  He is a deceiver.

So many of the popular prescriptions for controlling anger do not seem to be effective.  I think this is because they treat anger as one discrete emotion, separate from all of the other emotions.  But operating on the psyche is not really the same as a doctor performing a physical operation on a body:  we cannot just make a few incisions with a scalpel, or probe with a forceps, and remove that which ails us.  The mind does not work like this; it is not a collection of fishing lures in a tackle-box, or an assortment of Snap-On tools in a mechanic’s chest.  Yet Galen, that most profound of medical practitioners, was correct when he said

Medicine is, then, one of the productive arts, not simply as house building, carpentry and weaving are, but like the art that restores an adversely affected house and repairs a torn cloak…For it does not fashion the model for itself, but having seen the whole accurately through anatomy, it attempts to restore what is damaged.[1]

In order to understand the mind, we have to consider the mind as a whole, not as an assortment of separate things.  I remember reading recently in Jack London’s Cruise of the Snark of a fishing method he observed among the South Sea islanders.  They called it “stone-fishing.”  The natives would find a shallow lagoon somewhere and arrange their canoes in two parallel lines facing each other across the lagoon.  The lines of canoes would then approach each other; and the first man in each canoe would smack a large, flat stone against the water, which was tied to a long cord.  I suppose that the shock of the stone hitting the water would cause any fish in the vicinity to flee in alarm into the lagoon.  And as the two lines drew together, the fish would become trapped in a vice whose jaws were snapping shut; women on the shore would then wade into the shallow lagoon and collect the fish en masse.  This was stone-fishing.  And it seems to me that we should approach the examination of the mind in this way:  we have to surround it and engulf it, rather than try to pick out individual fish.  We have to “herd” the mind and all its components, and embrace it as one large school of fish, so to speak.

Anger is an agitation of the mind brought on by several causes.  The first of these causes is failed expectations.  Anger takes root and finds ready ground for flourishment when our aspirations have not been satisfied.  Aspirations for what, you ask?  Well, they can be for anything:  love, life, work, whatever.  It does not matter.  Another cause is infirmity:  either immaturity in years, or some physical affliction.  It is no accident that anger finds more fertile ground among those who are immature or infirm.  The young, the old, and the sick all find themselves confronted with dashed hopes or ruined expectations.  They either cannot process what is happening to them, or they are unwilling to do so.  Those who are weak or immature lash out at others in impotent expressions of rage.  As Plutarch tells us,

For as a swelling is produced in the flesh by a heavy blow, so in softest souls the inclination to hurt others gets its greater strength from greater weakness…So from the very great pain and suffering of the soul there arises mainly from weakness anger, which is not like the nerves of the soul, as someone defined it, but like its strainings and convulsions when it is excessively vehement in its thirst for revenge.[2]

This is one of the reasons why expressions of anger are so unbecoming to a man of good character:  they reflect some hidden deficiency, some festering weakness, that has not yet been mastered.  And yet it can be so difficult to banish expressions of anger; if I were honest, I would have to say that it will remain a lifelong task.  One does not simply squelch it, and be finished with it.  I have to trim my ivy, my weeds, and my trees frequently throughout the year.  Why should it be any different with the maintenance of my soul?  How can avoid my obligations of self-reflection and correction?  But how does one go about doing this?  The following remedies for anger I have found to be most effective

Love.  If we cannot banish anger entirely, we can at least try to replace it with an emotion just as powerful.  And no one can doubt love’s transcendent power in all things:  its ability to conjure solutions from nothing, its ability to transcend space and time.  Leo Tolstoy thought that Abraham Lincoln was on a par with Alexander the Great and the other truly great men of history; and he believed this because Lincoln’s triumphs were based on the search for what was best in human nature.  To see how his ideas developed and matured from the time he was a frontier lawyer to the time he was elected to his second term as president, is to chart the growth of a profound maturity in philosophical thinking.  I don’t think we have even as yet fully understood it, or grasped its implications.  As Tolstoy wrote, it will probably take us another five hundred years to understand Lincoln fully.

Plutarch tells us a good anecdote on love’s spiritual force in his essay On Love (XXV).  There was a rebel in Galatia named Sabinus who had failed in his rebellion.  He had a beautiful wife named Herois.  He decided to take refuge in some of the caves that festooned Galatia, and took one of his servants with him, a man named Martialis.  He then sent Martialis to tell his wife that he had poisoned himself and died.  When Herois heard this news, she wailed and wept bitterly; but then Martialis told her that the news was untrue, and that they had needed her to make an outward display of genuine grief.  She gradually began to live a double life:  she would visit Sabinus and spend time with him in his subterranean cave, and then would go about her business as a “widow” in her regular life.  Nothing could dissuade her from living this double life:  she saw it as her obligation.

She eventually helped disguise Sabinus by shaving his beard, dyeing his hair, and modify his appearance, so that she could take him to Rome and seek a pardon for him.  At some point she even became pregnant with his child, but managed to conceal it for a time by putting on a small amount of corpulence as camouflage.  She is said to have given birth to two sons in Sabinus’s cave.  But her efforts at obtaining clemency for Sabinus were not successful; we are told that the emperor Vespasian had her cast into the arena, where she met her end.  “For during the whole of his [Vespasian’s] reign he did no more savage act,” says Plutarch.  “Nor could gods or demons have turned away their eyes from a crueler sight. And yet her courage and bold language abated the pity of the spectators, though it exasperated Vespasian, for, despairing of her safety, she bade them go and tell the Emperor, ‘that it was sweeter to live in darkness and underground than to wear his crown.’”

This is what I mean by love.  This is the level of emotion required to banish anger.  Any expression of sincere emotion will redirect our energies from that which is base and evil, to that which is good and wholesome.  It is difficult, if not impossible, to suppress a powerful emotion; but we can replace one emotion for another, and train our mind to be redirected in how it expends its energy.

Plain Living.  Anger thrives when we indulge too much our appetites.  More always begets the desire for more, as we know; and this in turn inflames expectations that cannot be met.  The major reason why it is so difficult for most to live plainly is that our entire society is set up to promote the opposite of this.  You cannot escape it; you cannot avoid it.  Yet you must fight it again and again, for the battle is one for your soul.  You cannot afford to lose this battle.  The rational man must find ways of shutting his eyes and ears to the corruption and poison he finds himself plunged into.  Plutarch says that a lawyer named Satyrus, when pleading a case, asked his friends to stop up his ears with wax so that he would not be roused to anger when his enemies shouted abuse at him.[3]  We must do what is necessary to shut out negative stimuli that might cause us to be inflamed with anger.  If you are upset by listening to the news, which deliberately tries to inflame people with anger, then do not listen to it.  Listen to audio books instead.  Talk to friends instead.  Exercise instead.  When I go on walks these days, I have even taken to averting my eyes from scenes and sights that anger me.  If I do not want something in my field of vision, I do not let it enter my field of vision. You have a right to control what you see, hear, taste, and smell.  If we cannot easily control our emotions, we can at least brake, bank, and check what enters our senses.

As I bring these thoughts to a close I suppose I should also say that we cannot expect complete victory in this.  No human emotion can be amputated, only moderated, channeled, and controlled.  There is no one walking around in a permanent state of tranquility and bliss—at least no one who is normal.  We cannot expect the impossible.  We must try to beautify what we have; we must try to make order out of chaos by harnessing anger.  We should try to create something that will stand erect and clean amid the sundry chaos.  It is like the poet Wallace Stevens said in “Anecdote of the Jar”:

I placed a jar in Tennessee,

And round it was, upon a hill.

It made the slovenly wilderness

The wilderness rose up to it,

And sprawled around, no longer wild.

The jar was round upon the ground

And tall and of a port in air.

Read more in On Moral Ends, which is available in a variety of formats, including paperback, hardcover, audiobook, and Kindle:

5 thoughts on “The Moderation And Control Of Anger”