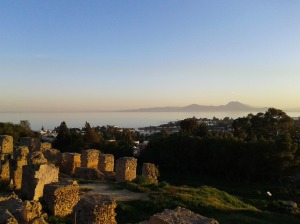 As is well known, it was customary for historians in antiquity to put speeches in the mouths of their protagonists.  It was a tradition that dated back to Herodotus and Thucydides, and was continued by the Roman historians.  How closely such orations corresponded with what was actually said on any occasion, is open to debate; perhaps some of them are reasonably accurate, but embellished by writers eager to show off their rhetorical training.  But the speeches served a purpose, even if they were not precise stenographic records:  they helped readers (or listeners, if a book was read aloud) get a sense of what was going on in the minds of the characters.  But to return to our story.

It was Hannibal who suggested the conference; Scipio agreed to the proposal.  Both generals moved their respective camps closer together, so that the meeting might take place somewhere equidistant between them.  Scipio positioned himself near the town of Naraggara, because a water-source was only “a javelin’s throw away (intra teli coniectum erat).”  Hannibal chose a place that was about four miles away from this.  The conference spot picked was one visible from all sides, so that neither party would have to fear a sneak attack.  Each general was accompanied by an interpreter.  And then they met.  Livy somewhat excitedly calls the two men “not only the greatest commanders of their era, but on the same level as any of the kings or generals of every nation in history before that time (Non suae modo aetatis maximi duces, sed omnis ante se memoriae, omnium gentium cuilibet regum imperatorumve pares).”

It was Hannibal who spoke first.  He was glad, he said, that Scipio was the commander from whom he had to seek peace terms.  It was a cruel joke of Fortune, he noted, that he had many years before met Scipio’s father on the field of battle, and had bested him; now he was forced to come to that man’s son in defeat.  It was too bad that the too nations had gone to war.  Although the past was an unbroken litany of mistakes, disasters, and misfortunes, Hannibal remarked, in a statement worthy of a philosopher, that

The events of the past can be more easily condemned than corrected.  [Praeterita magis reprehendi possunt quam corrigi]

At this point Hannibal dons the cloak of a philosopher, and brilliantly harangues his opponent on the transitory nature of Fortune.  He admitted that his country had overreached itself.  “We so tried to acquire the property of others, that we ended up fighting for our own (Ita aliena adpetivimus ut de nostris dimicaremus).  Hannibal told Scipio that he had lived a long life, and that his successes and failures had taught him it was better to follow reason than take one’s chances with fortune (Iam secundae, iam adversae res ita erudierunt ut rationem sequi quam fortunam malim).  And here Hannibal took note of his opponent’s youth and string of good luck.  With perhaps a hint of bitterness, he tells Scipio:

You are today what I once was at [Lake] Trasimene and Cannae…I too was once blessed by such fortune…although the gods may give us good judgment in good times, we should be thinking not only about what events have happened, but also about what can happen.  Even if you forget everything else, I am clear proof of what happens to those who fail to appreciate the role of fortune…The most favorable fortune should be trusted the least [Maxime cuique fortunae minime credendum est].

Hannibal finally got to his point.  Considering fortune’s uncertain dice, he told Scipio, it was better to seek a negotiated peace whose terms were certain, than to take one’s chances on the battlefield.  Peace terms are in the hands of man; but the outcomes of war are decided by fate.  He urged Scipio not to gamble everything on the uncertainties of battle; to do so, he said, would be to risk everything he had so far achieved in life:

It was far better, Hannibal reasoned, for Scipio to conclude peace on reasonable terms, than to take his chances in an armed contest.  With this, the Carthaginian concluded his statement.  Yet Scipio was not much moved by these sentiments.  He gave a polite and perfunctory response, but nothing worth quoting here.  He and Hannibal were unable to agree to terms, the battle was eventually joined, and Hannibal was decisively defeated.  So things apparently worked out well for Scipio.

Scipio’s good fortune at Zama does not diminish the power of Hannibal’s cautionary words.  I find them to be profound, and a compelling testimony.  We pay far too little attention to the realities of fortune’s power:  a string of successes will inevitably be met with a string of crippling defeats.  Hannibal’s words could only have been uttered by a man who had both scaled the heights of glory, and felt the despair of abandonment and looming defeat.  There is a degree of maturity and seasoning that is a prerequisite for certain kinds of knowledge; we cannot feel the truth of some things in our bones until those bones have been broken and battered by fortune.  Many times as an attorney I have represented clients in criminal or civil cases.  In nearly every case, there will come a point where a proposed resolution of the matter is up for consideration; it is then the job of the attorney to counsel his client on the available options, and to suggest what he believes is in his client’s best interest.  If the relationship is a good one, and if the client trusts his counselor, he will take this advice to heart; but there will be rare cases when a client cannot see the danger lurking around the corner.

Managing risk is an art, and a necessity.  It often happens that a settlement, however imperfect, is a far better choice than rolling the dice at a trial, where uncertainties abound, costs balloon, and risks dramatically increase.  In these situations, the words of Hannibal become the voice of reason whispering in our ears:  On each side there will be swords, and on each side there will be corpses.  Nowhere less than in war do actual events respond to our expectations.  Recklessness and indiscretion are calamity’s surest friends.  He who tempts fortune too often, is visited with precisely the outcome he deserves.

Read more about the career of Hannibal in the new translation of Cornelius Nepos’s Lives of the Great Commanders: