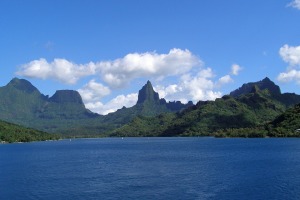 Herman Melville’s first book, Typee, describes his adventures among the natives of the Marquesas Islands in the South Pacific.  His whaler, the Acushnet, had reached Nuku Hiva, and by that time the young rogue had reached the limits of his tolerance of shipboard life.  So he left.  He and his friend Toby took a few personal possessions and descended into the valley of the Typee (Taipi) tribe, to see what the great Unknown had to offer.  Melville had had enough with tyrannical ship-captains; he could accept no further impediments to his exploratory desires.  As the Roman historian Velleius Paterculus says,

So difficult is it for men to accept delays in the implementation of their hopes.  [Historiae II.67]

His account of these Polynesian experiences, published in 1846—grounded in fact but embellished with information gleaned from other sources—was what established his literary reputation.  I re-read it recently, and found it a vastly different book than the straightforward adventure tale I had known decades ago.  The passage of years has this effect; it conditions and seasons our views, softening the harsh lines of orthodoxy, and the rigid molds into which our molten experience is poured.  Some passages struck me as being especially significant. Melville takes pains to point out the omnipresence of “taboos” (or tabus) in Polynesian society:  that is, things that cannot be done, touched, spoken of, or associated with.  Taboos were hardly a simple matter.  Their origins were cloaked in mystery, and wrapped in the sanctity of religion.  Our intrepid young adventurer tells us:

So strange and complex in its arrangements is this remarkable system [of taboos], that I have in several cases met with individuals who, after residing for years among the islands in the Pacific, and acquiring a considerable knowledge of the language, have nevertheless been altogether unable to give any satisfactory account of its operations.  Situated as I was in the Typee valley, I perceived every hour the effects of this all-controlling power, without in the least comprehending it.  Those effects were, indeed, wide-spread and universal, pervading the most important as well as the minutest transactions of life…For several days after entering the valley I had been saluted at least fifty times in the twenty-four hours with the talismanic word “taboo” shrieked in my ears, at some gross violation of its provisions, of which I had unconsciously been guilty.

The day after our arrival I happened to hand some tobacco to Toby over the head of a native who sat between us.  He started up, as if stung by an adder; while the whole company, manifesting an equal degree of horror, simultaneously screamed out “taboo!”  I never again perpetrated a similar piece of ill-manners, which, indeed, was forbidden by the canons of good breeding, as well as by the mandates of the taboo.  But it was not always so easy to perceive wherein you had contravened the spirit of this institution.  I was many times called to order, if I may use the phrase, when I could not for the life of me conjecture what particular offence I had committed.

Now before we cluck our tongues at our own superiority over the inhabitants of the Marquesas, we should be reminded that we too have our own taboos.  Ours are just as constricting and pervasive as those Melville confronted among the Typees, of course; it is just that we do not like to speak of them, or reflect on their origins.  Even chains become invisible with habit.  What are taboos?  What social purpose do they serve?  In a literal sense, the word in the Polynesian languages means “prohibited.”  Access to certain things is reserved only to a certain class, and to no other.

You may be familiar with that Old Testament story (2 Samuel 6) of how a man named Uzzah was struck dead for having the temerity to touch the Ark of the Covenant.  David took the Ark to Jerusalem in a cart, and the oxen transporting it caused the sacred cargo to topple over; Uzzah touched it to prevent its falling, and thereby incurred divine wrath for violating a taboo.  Perhaps the anthropologists will agree with us when we speculate that most taboos originally began as health and safety guidelines; and that, over time, through ritualized observance, they began to take on the sanctity of religious obligation.  Or, perhaps, taboos develop over time as mechanisms of social control:  the group is kept in line, so to speak, through mandatory behavioral dictates.  If this is true, then it would seem that taboos are connected with the concept of totems:  that is, the ritual veneration of some particular object.  Totem is an Ojibwa Indian word, but the practice of totemism is found not just in North America, but all over the world.

Almost anything can be worshipped as a totem; the practice helps to unify the group in the service of a common objective, and reinforces a sense of shared identity.  Totemism probably was also a reaction to fear.  The object worshipped was connected with something powerful, or deadly, or mysterious; and by propitiating the totemized object, the tribe might be able to deflect the entity’s wrath.  So there is this connection between totemism and taboos, in the sense that both practices serve the purpose of control.  And the regulators of such control, the priestly class, will decide when taboos have been broken, or how the totem should be worshipped.  To run afoul of such directives is to court a dangerous ostracism.  As Virgil says,

The priestly class will tell us what should be our totems, and what should be our taboos.  Before the modern period, religious institutions, feudal structures, or the naked authority of the state that handed down these mandates; in the modern period, the media has sought to step into this sanctimonious role.  It will tell us who and what to worship, and who or what to avoid; it lays down its mandates on what should be forbidden.  With compliance, all will be well, and we can all sleep safely.  It will be just as Virgil says in his Georgics:

Every vineyard matures in bountiful production,

And wherever the god turns his virtuous head.  [II.390]

But to return to Typee.  Melville was suspected of exaggerating some aspects of his account.  There were some embellishments, as previously noted, but it goes too far to say that he was consciously lying.  He turned a four-week sojourn into four months, it is true, but this is forgivable hyperbole in a young author announcing himself to the world.  One critic noted—unfairly, I think—that Melville’s description of his escape from the Typees strains credulity.  This critic found it unlikely that the young Melville would be able to dash along a shoreline covered with bits of coral and shell as he was trying to escape from his captives.  I do not find this unlikely at all.  I should like to see what this critic would do in similar circumstances, indeed.  If you were being chased by natives you believed to be cannibals, and if the thought of imminent freedom were utmost in your mind, you would willingly dash over hot coals to secure your release.  Without hesitation, I may add.

But this is how it is with people who try to evaluate things after the fact.  When something is outside of their own limited experience, some people find it incredible—nay, impossible—to believe that someone else might have experienced just that thing.  They cannot accept that which lies beyond their comprehension.  They find it to damaging to their egos to believe that someone might possess faculties or abilities that cannot be explained or measured in familiar terms.  And so they comfort themselves with conspiracy theories, or similar exculpatory fables.  Shakespeare’s plays could never have been penned by this simple man with no formal education, they say.  So-and-so could never have done such-and-such, as he lacks the training to do such-and-such!  So do these priestly-class asses bray.  Well, let them bray.  For the subtle mind knows that there are more wondrous things in this world, and greater miracles in creation, than could be imagined by all the aggregated Dantes and Virgils, even if they had all eternity to write their verses.  Slavish minds, minds locked into unchangeable rigidity, will never be able to appreciate the wondrous deeds that great souls are capable of.  I think our friend Petrarch said it best when he said this in a letter to Andrea Dandolo, the doge of Venice, in 1351:

We are insane to seek in slavish souls the faith we are desperate to have from our own brothers.  [Insani, qui in venalibus animis fidem querimus quam in propriis fratribus desperamus].

I will close with one anecdote to illustrate this point.  When the medieval Arab traveler Ibn Battuta returned from his journeys, there were of course many who doubted that he had seen and done the wondrous things he had described.  They simply could not comprehend what he related, or what he represented.  It was here that another great soul, Ibn Khaldun—the author of one of the most impressive works of the medieval period—stepped in to remind us that even though some things may be outside our own experience, this does not mean they are impossible.  To illustrate this point, Ibn Khaldun related the story of a minister who was imprisoned with his young son.

When the boy grew up, he began to ask about the meat they would get from their jailers.  His father told him that the meat they ate was mutton, and explained to the boy what a sheep was.  The boy asked his father if a sheep was anything like a rat.  The minister, quite surprised, told him that the two animals were quite unlike.  When the minister tried to explain the appearance and shape of other animals, like oxen and camels, the boy similarly tried to connect these animals to rats.  “This was all because,” explained Ibn Khaldun, “the only creature the boy had ever seen was the rat:  therefore, he considered all creatures to be sub-species of rat.”

4 thoughts on “Taboos And Totems”