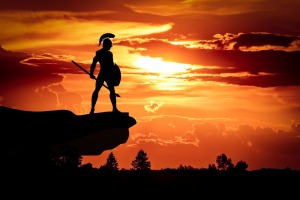 Someone on Twitter recently asked me to make a list of the top war films.  The titles below are the result.  I present them in no strict order, although I do believe the first five are superior to the remainder.  There are a great number of war films, but my goal was to select the few that occupy a special category.  Each reader, of course, may form his own judgments.

Platoon is not only the greatest war film ever made, but belongs on that short list of greatest films made in any genre.  Its grimy, muddy realism is only exceeded by the strength of the performances and the unforgettable quality of the characters.  A raw recruit is plunged into the vortex of the Vietnam War, an experience that tests both his physical endurance and his moral compass.  Barnes, Elias, and the rest of the platoon have now passed into immortality.  At heart, like all of Oliver Stone’s films, Platoon is a morality tale.  And none greater has ever been filmed.

Some films struggle for truth, for grand meanings, and for answers to the most mystifying questions.  This is one of those films.  It is nominally a “war film,” in the sense that its backdrop is the Vietnam War; but like its inspiration, Conrad’s Heart of Darkness, the setting could be in almost any harsh environment.  A special forces captain is tasked with tracking down and “terminating the command” of a renegade colonel who has apparently gone insane.  What begins as a straightforward assignment soon turns into an exploration into life’s hidden meanings and darkest secrets.  The cinematography has never been matched, and Kurtz’s brooding monologues at the end provide exactly the right tone of mystery and opaqueness.  And it almost feels as if the Doors’ “The End” was made just for this movie.

This tense drama follows the adventures of a German U-boat crew on patrol in the Atlantic during the Second World War.  The director painstakingly recreated the precise setting and environment for the action, and the viewer finds himself just as claustrophobic and exhilarated (at times) as the sailors aboard ship.  And yet Das Boot is so much more:  this is an operatic tragedy on a grand scale, an awe-inspiring and calamitous spectacle worthy of Wagner himself.

It is not a perfect film.  Spielberg has never quite been able to cure himself of a certain weepy sentimentality that at times detracts from this movie’s ferocious power.  But there is no denying that Saving Private Ryan set an entirely new standard for combat scenes.  There is before Saving Private Ryan, and after Saving Private Ryan.  The story is a good one, too:  a detachment of infantrymen is sent to locate a soldier who has been called home due to the deaths of his brothers.  It ends just the way you would expect it to, and we leave the experience with only its lessons to reflect on.

Few films can truly be described as revolutionary.  This is one of them.  Shot in an ostensibly “documentary” style about the Algerian uprising against French colonial rule in the 1950s, the film is actually a scripted drama with real actors.  But it feels like the real thing.  The Casbah simmers with intrigue, double-crosses, and violence; and when a special French military unit is called in to quell the uprising, a full-fledged insurgency results.  This movie was made required viewing for US troops in Iraq in the early 2000s, and it is not difficult to understand why.  Timely, relevant, and visionary, this film is not to be missed.

This morality tale disguised as a war film would have enthralled the ancient ethicists.  It offers a profound character study of a man (Col. Nicholson) whose obsession with military procedure and discipline causes him, little by little, to stray into collaboration with the enemy.  A British officer captured by the Japanese in the Second World War first refuses to work, then agrees to do so as long as he can retain authority over his men.  A philosophical film of onerous significance, Bridge on the River Kwai shows us the process and effects of moral corruption, and the deadly consequences that such corruption can wreak.

This little-known French film impressed me so much when I first saw it that I could not stop thinking about it for a week.  Essentially banned in France when it was first released, it has only received its proper credit in recent years.  The plot follows the relations and interactions of a group of French resistance fighters in the Second World War.  Dark, brooding, and cynical, the movie basically shows the vaunted “resistance” as having been far more deadly to each other than they ever were to the occupying Germans.  This was, understandably, not a welcome message for postwar French filmgoers.  Few films have dared to strip down human motives to such bare, unadorned essentials.  A brave work of art.

Few movies have laid bare the cold, ruthless calculations of human dynamics under external pressure as well as Stalag 17 has.   The plot:  a group of American POWs in a German camp begin to suspect that there is an informer among them.  The camp is a microcosm of life, of course, and we see all personality types represented.  But the hunt for the mole takes many wrong turns, and the secret motivations of the protagonists are exposed in all their brutal primitivism.  In the end, toughness and raw courage must save the day.  William Holden has never looked more impressive, nor has Peter Graves ever been more sinister.

Like all great “war” films, this one transcends its genre.  More a biographical study of Patton the man, it follows the general from Africa to the battlefields of Europe.  Sober, sensitive, and intelligent, Patton never descends into hagiography; it presents the general as he was, warts and all, and allows the viewer to experience the man on his own terms.  Rarely have character studies been this artful.  The final scene is indescribably moving.

It is easy to forget that when this movie was released, the Vietnam War was still largely a taboo subject in Hollywood.  No one wanted to hear about it in the 1970s.  The Deer Hunter was perhaps the first to break this taboo, and it accomplished this feat through scenes of desperate, raw intensity that few films have equaled.  The long opening wedding sequence detracts from the film’s cohesion, but what follows after this more than makes up for it.  The famous “Russian roulette” sequence has passed into film legend, and it is every bit as intense as you remember it being.  Ultimately, though, this is a tale of friendship, suffering, and loss that represents the acme of director Michael Cimino’s career.

Yes, this is war film.  The French and Indian War may not be familiar to many viewers, but this adaptation of James Fenimore Cooper’s novel plunges us into the middle of the colonial American wilderness in upstate New York.  Intelligent, well-acted, and bursting with action, this is a deeply satisfying film experience.  Natty Bumppo and Magua are literary icons, and represent that eternal struggle for the heart of the North American soul.

Some have found this film to be a ponderous, overly-long excursion into military unreality.  I see it differently.  A long psychological portrait composed of many smaller portraits, the film’s strength derives from its brilliant voice-overs.  These monologue sequences are the soul of the movie, and enable us to enter the minds of the combatants who fought on Guadalcanal in the Second World War.  This is not a film that intends to portray “realism”:  the director is after psychological truths about men under duress, and on that level he is without peer.

This well-casted film relates the ill-fated Allied attempt to seize and hold several bridges into Germany in the final year of World War II.  The operation (“Market Garden”) turns into a disaster when the German High Command sends several crack SS divisions to intercept the Allied forces.  I saw the movie again recently, and was struck by its skillful blending of “big picture” operational dynamics with intimate, small-unit concerns.  There are some unforgettable scenes:  James Caan pulling his .45 pistol on a doctor, Sean Connery’s outrage in the final minutes, and Anthony Hopkins’s moving exchange with a dying fellow officer about why he felt it necessary to carry an umbrella.