Click on the cover image above for purchase information.

All of my books are available with the world’s major booksellers, including Amazon, Barnes & Noble, The Book Depository, and many others in Europe and Asia too numerous to list here.

If you have a question about any of my titles, please email me at qcurtius.com.

In the paragraphs below, I will explain what the book is about, and why it is an important addition to the literature on Stoicism.

Stoicism has proven itself to be an enduring and influential philosophy.  Of the four major philosophical  schools of antiquity—Epicureanism, Stoicism, Platonism, and Aristotelianism (Peripateticism)—it is arguable that Stoicism has enjoyed the most popularity in the modern era as a practical ethical guide.

The maxims of Marcus Aurelius, Epictetus, and Seneca are still quoted frequently.  Stoicism is admirably free of the metaphysical baggage that weighs down its competing schools.  And its moral code still offers a pragmatic guide to disciplining and taming our passions.

Cicero was an eclectic and a skeptic, and had the keen sense as a lawyer to cull various doctrines from the different schools and fuse them into something that was uniquely his own.

He wrote a great deal on Stoic themes, and many of his works have a strong Stoic flavor.  As he advanced in age, and as his personal and professional sufferings mounted, he came to appreciate the Stoic code’s ability to offer a sincere and dignified prescription for coping with suffering.  He also valued it as a tool for the disciplining of the young.

What Is “Stoic Paradoxes”?

Stoic Paradoxes is the closest thing to a “handbook” of Stoicism that Cicero (or any other ancient author) produced.

In fact, Stoic Paradoxes is the best place to get a short summary of the main ethical principles of Stoicism.

It is not a widely known work.  This is unfortunate, because the work is a very suitable introduction to the main points of the Stoic ethical creed.

In a series of short essays, it discusses the major Stoic doctrines in a way that is distinctly the author’s.  Its argumentative tone only adds to its stimulating value:  this is Stoicism, to be sure, but it is Stoicism of a Ciceronian mintage.  He harangues, argues, tests, weighs, and cajoles; even as a philosopher, he never ceases to be an attorney.

The work has not, in my opinion, received the attention that it has deserved.  As far as I am aware, it has not until now appeared as a separate book, with its own commentary and textual notes.  It seems that the most recent published English translation was done in 1942, if not earlier.

While adequate for its time, a translation done seventy-five years ago now unavoidably shows its age.

What was needed was a return to the original Latin text for a fresh new interpretation, taking into account the needs and diction of the modern reader.  This book is an attempt to do precisely this. 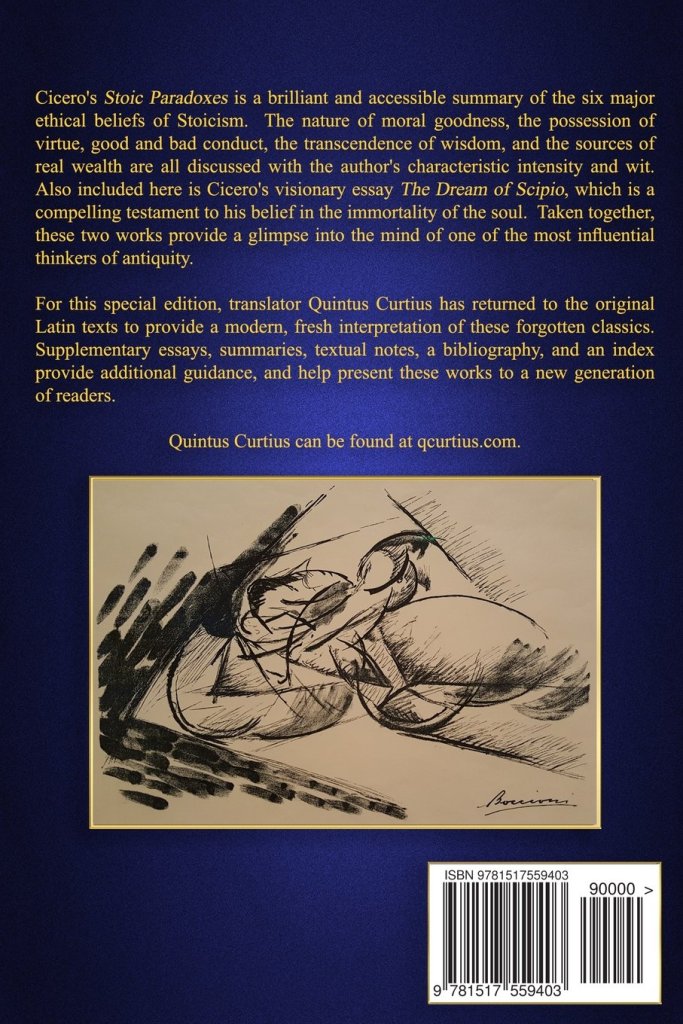 I believe that this book fills a critical need.  It is the first published translation of the work in many decades, and helps to bring this forgotten classic the attention that it deserves.  It is a concise, eloquent, and argumentative presentation of the main ethical points of the Stoic creed, as Cicero understood them.

What Is The “Dream Of Scipio”?

I have also decided to include in this book Cicero’s brilliant essay Dream of Scipio.  It is not part of Stoic Paradoxes, but rather comes from another work, Cicero’s treatise De Re Publica.  To me it forms a nice balance with Stoic Paradoxes.  As a literary work of art, it is nearly perfect: it is concise, it does not belabor its points, and its lofty language both inspires and moves us on an emotional level.

Here surely must be one of the first, if not the first, uses of astral projection in Western literature.  Whereas Stoic Paradoxes concerns itself with the correct ways to live our lives, the Dream of Scipio deals with the migration of the soul after death.

It is a masterpiece of philosophical vision, and shows a side of Cicero that we do not see in any of his other works.  Its intensity, eloquence, and unabashed idealism demonstrate beyond all doubt that Cicero could be an original philosophical force in his own right.

What Else Is In The Book?

I have also included explanatory essays, textual notes, biographical information on Cicero, synopses of the texts, a bibliography, and an index.

Readers of the Kindle edition can find the textual notes by clicking on the Roman-numbered notes within the text.

The Art Of Translation

Translators are often known to complain about the dilemmas they face in rendering the thoughts and words of a writer from one language into another.  The reader may be assured that this dilemma is very real.  For the conscientious translator, there is a constant tension between faithfulness to the original text and readability in the target language.

If the translator emphasizes too literal a rendering of his text, he risks producing something clumsy or opaque in the target language; but if he emphasizes a looser, “freer” rendering of the text, he risks producing something that departs too far from the original.  So one must strike a balance between fidelity to the original text, and unambiguous comprehension in English.  What is perfectly logical in a Latin sentence is often not at all desirable in an English sentence.  To the modern English reader, an overly literal rendering of some of his longer sentences would have produced something tortuously artificial.

Yet fidelity to the original should be, in my view, the translator’s default position, while keeping in mind the needs of the modern reader.  When in doubt, I have always inclined to a more literal translation, while remaining aware of the need to spare the reader from the worst excesses of Ciceronian sentence structure.

What Is The Book’s Table Of Contents?

Here are the contents of the book:

I hope readers enjoy the work.  Any questions about the book may be directed to qcurtius@gmail.com, and I will be happy to respond.