Skip to content
HomeBOOKSSallust: The Conspiracy Of Catiline And The War Of Jugurtha

In May 2017, I published an original and extensively annotated translation of Sallust’s Conspiracy of Catiline and War of Jugurtha.  It uses a fresh, modern English idiom that preserves the flavor of the historian’s famous epigrammatic style.  Fully outfitted for comprehension and efficient referencing, this special edition contains the following unique features:

A video review by literary critic Andrew Vittoria can be found here:

Because I was dissatisfied with some of the existing translations and editions, I decided to go back to the original Latin texts and begin with a fresh perspective.  My goal was to produce a work not only of the finest literary quality, but also something that could be picked up and read with enjoyment by any reader, especially someone with no background in the subject matter.  No previous background in the classics or in Latin is needed. I have made every effort to make this a truly self-contained “course.”

From the book’s Foreword:

Repeated readings of the original Latin texts convinced me that the existing translations did not give Sallust the full resonance that they deserved.  This was especially true in the case of Jugurtha, where the relationship between the commanders Marius and Metellus, the descriptions of some of the battles, and the explanations of certain tactical and administrative matters would greatly benefit from a translator with practical military experience.  There were other deficiencies that needed to be addressed as well.  Until now no translator has called sufficient attention to the counterinsurgency aspects of the Jugurtha.  Its modern relevance has never been more obvious.  The inclusion of chronological tables, maps, and diagrams could assist the reader who had little or no experience in Roman military or political history. It was then that my desire to translate Sallust was born. What I felt was needed was a fully modern translation that provided the reader with essential details— in one place— to enhance understanding and enjoyment of the text.

Sallust was the first of the great Roman historians and his influence has been considerable. He was studied by the rhetoricians (e.g. Quintilian) and imitated by those who came after him (e.g., Tacitus).  Like any great man he had more than his share of detractors; but it cannot be disputed that his works have been taught and studied for many centuries.  In the nineteenth and early twentieth centuries of our own era, numerous “school editions” of his works were used as college texts for advanced students of Latin.

Sadly, with the general decline in classical studies since the mid-twentieth century, the pleasures of reading him have been denied several generations of students.  What the reader of 2017 needs is a new translation— annotated and illustrated— that presupposes no knowledge of Roman history and is not burdened by old-fashioned English stylistics. This was the approach taken in my translation of Cicero’s On Duties and I have found that it has resonated positively with readers…

This translation of Sallust is designed for the general reader who wishes to have an edition that is entirely self-contained. Specific tools are included in this volume to assist in comprehension. There are notes, maps, illustrations, a detailed introduction, chronological tables, an index, and topical charts. Every effort has been made to ensure that the reader is given the necessary tools to understand and enjoy these two great historical monographs.

You will hold in your hands everything needed to enjoy one of the classics of Western historiography.  I believe this edition of Sallust is something readers will refer to and enjoy for many years. 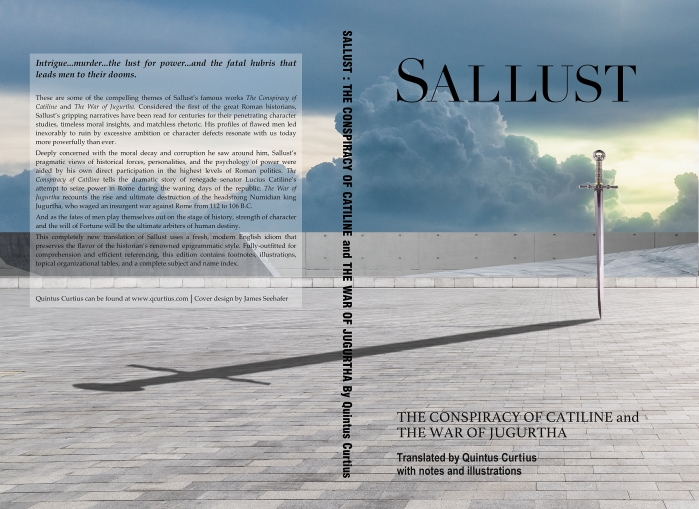 III.  Chronology Of The Catilinian Conspiracy

IV.  Topical Organization Of The Conspiracy Of Catiline

V.  Text Of The Conspiracy Of Catiline

VII.  Chronology Of Major Events Of The Jugurthine War

VIII.  Topical Organization of the War of Jugurtha

IX.  Text Of The War Of Jurgurtha

Intrigue…murder…the lust for power…and the fatal hubris that leads men to their dooms.

These are some of the compelling themes of Sallust’s famous works The Conspiracy of Catiline and The War of Jugurtha.  Considered the first of the great Roman historians, Sallust’s gripping narratives have been read for centuries for their penetrating character studies, timeless moral insights, and matchless rhetoric.  His profiles of flawed men led inexorably to ruin by excessive ambition or character defects resonate with us today more powerfully than ever.

Deeply concerned with the moral decay and corruption he saw around him, Sallust’s pragmatic views of historical forces, personalities, and the psychology of power were aided by his own direct participation in the highest levels of Roman politics.  The Conspiracy of Catiline tells the dramatic story of renegade senator Lucius Catiline’s attempt to seize power in Rome during the waning days of the republic.  The War of Jugurtha recounts the rise and ultimate destruction of the headstrong Numidian king Jugurtha, who waged an insurgent war against Rome from 112 to 106 B.C.

And as the fates of men play themselves out on the stage of history, strength of character and the will of Fortune will be the ultimate arbiters of human destiny.

I hope you will join me on this exciting journey with Sallust.  The rewards are immeasurable, and will be felt both immediately and for many years to come.  It has been very satisfying to know that other readers have felt the same way.