Skip to content
Home“Roadside Picnic”: The Insignificance Of Man 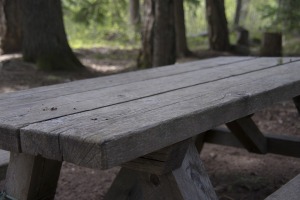 The science fiction genre is filled–too filled–with stories about what might happen if extraterrestrials came into contact with human beings.  It is a favorite subject of writers, who use the theme to explore deeper truths about man and his place in the universe.  And this is all well and good.

But imagine this.  Imagine that if such a “visitation” were to occur, that the aliens took absolutely no notice of man or his works.  Imagine that we humans are so insignificant, so low on the evolutionary scale, that we do not even register on the alien “radar” as worthy of comment or consideration.  This to me seems the most disturbing and unsettling scenario of all.  Other alien visitation scenarios smack too much of self-centered human egotism.

How unsettling it is to be completely and totally ignored!

And yet this is the premise behind one of the most difficult, and rewarding, science fiction novels of the twentieth century.  I am speaking of the novel Roadside Picnic, written by Arkady and Boris Strugatsky.  Published in the Soviet Union in 1972 (but not appearing in English until five years later), it has seen numerous editions and translations around the world.  Let us describe for a moment this weird and wonderful work.

The premise of the novel is that the Earth has been visited by aliens at various points around the globe.  This visitation (called “the visit”) was not noticed by humans at the time.  Essentially what happened was that some higher intelligence arrived on Earth, occupied some space (called “zones”) for a short period, and then left.  Each of these zones is a few square miles in size.  But they left behind numerous mysterious “artifacts,” about which humans know little or nothing.

These strange artifacts left in the visitation zones possess properties that are mostly beyond human comprehension.  Some of them create powerful gravitational fields.  Some seem to have the power to improve the health.  Some of the alien artifacts have functions that are totally unknown.  Most of them are dangerous.  No one is quite sure, and the acquisition of these objects has been forbidden by governments.  People who lived in the “zones” during the visitation suffer from health problems, like birth defects and insanity, as do people who try to visit the zones too often.  Access inside them has been strictly limited by authorities.

But human curiosity being what it is, people want to acquire such things.  An illicit trade has developed in the trafficking of these alien artifacts.  Daring thieves–called “stalkers”–sneak into the forbidden zones to acquire the valuable artifacts, which will then be sold on the black market.  The novel’s title is a reference to an analogy meant to conceptualize the alien visitation.  We should imagine a group of people having a picnic in a field on the side of the road.  Such people might leave behind them various things, such as magnets, can openers, watches, and the like.  After this “visitation” ended, the ants and other insects inspecting the residues of the visit would have no idea of the function of the objects they discovered.

This is the origin of the “roadside picnic” analogy.  In the same way that we pay no mind to grasshoppers or ants at a picnic, the advanced aliens who visited the Earth in various “zones” paid no attention to us.  We were beneath their contempt.  It is a disturbing premise, but yet also a brilliant one.  Such an incredible premise lends itself to philosophical speculation.  Consider the following piece of dialogue from Roadside Picnic:

“How do you think it’s all going to end?”

“What are you talking about?”

“The Visit.  Zones, stalkers, military-industrial complexes–the whole sinking mess.  How could it all end?…

“That depends on our luck,” said Valentine.  “We now know that for humanity as a whole, the Visit has largely passed without a trace.  For humanity everything passes without a trace.  Of course, it’s possible that by randomly pulling chestnuts out of this fire, we’ll eventually stumble on something that will make life on Earth completely unbearable.  That would be bad luck.  But you have to admit, that’s a danger humanity has always faced.”

In 1979, visionary Russian film director Andrei Tarkovsky adapted the book into a science fiction film called Stalker that has since become something of a cult classic.  It is not an easy film.  It is dark, brooding, and filled with philosophical dialogues that may baffle the average viewer.  But like most great works, if one is willing to accept it on its own terms, it provides deep rewards.

The premise of the film is this.  Two clients (a writer and a professor) hire a “stalker” to help them enter the zone.  They have heard that within the zone is a room which exerts magical powers:  those who enter the room are able to have their deepest wishes granted.  Dark stories are told of previous adventurers who entered the room, had their wishes granted, and then committed suicide or met some dismal end.

Much of the film is spent with the characters trudging through the zone (which looks like the forbidden zone around Chernobyl), explaining why they want to enter the mysterious room.  The atmosphere is filled with foreboding and dread, and the viewer feels like he is entering a surrealistic nightmare.

Through the use of dialogues, the director explores the themes of human happiness, desire, the transient nature of all things, and the folly of greed.  What happens when the characters finally reach the room is an unforgettable experience.

Only in Russia could a film like this have been made.  It is a film of ideas, an examination of the human consciousness and what dark secrets animate it.  Much of the film was shot at an abandoned, run-down hydroelectric plant in Estonia.  Tarkovsky himself, as well as several other crew members, met early deaths, which some have attributed to the toxic nature of the film locations.  The film’s sound designer, Vladimir Sharun, later said:

Tarkovsky died from cancer of the right bronchial tube. And Tolya Solonitsyn too. That it was all connected to the location shooting for Stalker became clear to me when Larisa Tarkovskaya died from the same illness in Paris.

The artist who sacrifices himself for his work occupies a special place in the collective consciousness of man.  Reading Roadside Picnic and watching Stalker are not easy tasks.  But those who are interested in the most fundamental questions on the origins and destiny of man will not be deterred from penetrating these forbidden zones of inquiry.  We must become our own stalkers, in a way, to penetrate these uncertain regions, and try to haul back what artifacts that we can.  Even if the prizes are dangerous.  Even if they are to be our ruin.  We must do it.  Must.

They, like the stalkers of Roadside Picnic, are the pathfinders of the mind.