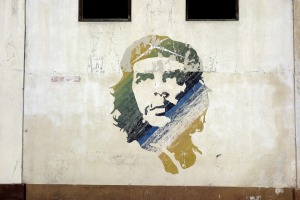 The visage of Ernesto “Che” Guevara has graced countless t-shirts, posters, and other kitsch memorabilia.  He has assumed the status almost of a secular saint, the supposed defender of the poor and marginalized.  Few who concern themselves with such things, however, know much about the man himself, or about his murderous legacy.

The book Hunting Che chronicles the little known story of the hunt, capture, and execution of the man who was once the most feared revolutionary agitator in the world.  In writing this article, I have tried to be as objective as reason and experience will allow.  But I have to confess that I loathe Marxism in general, and came to detest this Marxist in particular, as I learned more and more about his deranged plans to foment chaos and violence in societies that needed neither.

I must grudgingly give him respect as a fighter and as a man of “principle” who risked his life repeatedly, even though I believe the principles he fought for were among the worst that any man could embrace.

Like many such men, he cloaked the infantile graspings of his ego with the mantle of philosophic principle.  Converted to communism at an early age, he saw in it the answer to all his prayers.  An idealistic young man from a solid middle-class background, he saw himself as the defender of the interests of the dispossessed.  In Marxism’s turgid doctrines he found the intellectual justification for his will to power and violent impulses.  Those who knew him testified to his fascination with bloodshed and killing.  His personality fits what psychologists would today call that of the malignant narcissist.

But he was not without courage.  His commander in the Cuban revolution, Fidel Castro, thought he took unacceptable risks, far too often for negligible gains.  After the communists gained power in Cuba, Che (the nickname comes from the Argentinian slang word “che,” which is used much the English “hey” or “yo”) was picked to be finance minister.  He knew nothing of economics or finance, and was ill-suited to the job.  He was also an arrogant, opinionated man who found it difficult to work with others.

Guevara had a brutal side.  He had no qualms about handing out death sentences to scores of Cubans in the wake of the victory over ousted president Batista.  Some of these men were the ex-dictator’s flunkies, to be sure, but there were also many innocent middle-class or wealthy people who lost their lives in waves of revolutionary violence for which he was directly responsible.

It was not purely out of a sense of altruistic idealism, then, that he decided to resign his posts in Cuba soon after the end of the revolution, and embark on some missionary-like quest for worldwide “revolution.”  Having neither the ability nor inclination to assume the hard tasks of leadership and administration of a country, Guevara retreated into his fantasies, where he could continue to have some relevance.  He basically burned his bridges in Cuba and chose the life of the international bandit, desperately seeking out the glorious death in battle that he knew would turn him into martyr.

He knew the world loved his rebel affectations:  the beret, the green fatigues, the cigar, and the snippets of Marxist bullshit that he could rattle off for the press.  In 1965, he found his way to the African Congo, which at the time was beginning to emerge from the colonial era.  But he quickly became disillusioned with happenings there.  The Congolese were hopelessly corrupt and backward, he believed, and there was no chance for him to do anything useful there.

With the failure of his Congo adventure, Guevara next turned his sights on Bolivia.  The landlocked South American nation was ideal, he thought, for his purposes, as it had vast social inequalities.  It also had the added benefit of bordering several other prominent states in the region.  A communist victory there might spread to Argentina and Brazil, he thought.

By this time, the CIA was frantically trying to track him.  But it was not easy.  There were rumors of his presence in Bolivia, but nothing tangible.  By 1967, Bolivian Army units were coming under attack by bands of ragtag rebels, the word was that Che was conducting the operations.  Bolivian president Renee Barrientos was not amused.  He could sense that leftist agitation was spreading among miners and trade unionists, and the presence of rebels in the country might galvanize opinion against him.

He sent the United States a clear message:  help me hunt down and kill Che Guevara.  To this end the CIA sent a team of Green Berets, along with some hand-picked Cuban exiles who had been sharpening their knives for years in the hope of having a private conversation with the man who had helped deliver Cuba over to communism.  The Green Berets set up a training school and soon taught the Bolivian Army what it needed to know about counter-insurgency.

Che’s abilities as a guerrilla commander have been greatly overrated.  He had a poor grasp of logistics and supply.  He would not listen to the counsel of others.  And he had no ability to identify with the average Bolivian peasant, who was frequently of Native American ancestry and knew nothing at all of communist ideology.  Cut off from any resupply, he began to wither to nothing in the bush.

Good intelligence and patrolling work in the countryside (with some luck) finally gave the Bolivians the break they needed.  Che and a few of his band were cornered in a valley, and all avenues of escape were cut off.  He surrendered and was taken into custody.  When captured, Che was a pitiable sight.  He was wearing rags, he was covered in dirt, and had lost a great deal of weight.  But even in captivity, with his entire world ended, he remained arrogant and unreflective.

But what to do with the world’s most dangerous revolutionary?  The Americans wanted to fly him to Panama for interrogation.  But President Barrientos was uncompromising.  No, he declared, this foreigner infiltrated into my country to terrorize and destabilize it.  He must die.  It was not the CIA, but the Bolivian government, who gave the order to shoot Guevara.  And, it must be said, the decision was a sound one.  Putting someone like Guevara on trial would have been equivalent to putting Osama Bin Laden on trial.  It was simply unthinkable to give such a man a platform to air his politics.

He was shot without much ceremony in an abandoned schoolhouse, and his corpse was buried without ceremony.  His legacy is negligible.  Had he possessed a more mature understanding of history, he would have grasped that political revolutions seldom change much, except the identity of the person at the top.  He was not without a penetrating intelligence; but he was unable, or unwilling, to discipline his ego to serve the imperatives of reason.  His final scenes as a starving, dirt-encrusted vagabond inspire not awe, but contempt.

The only lasting revolutions are those of the mind and the spirit; and the only true revolutionaries are the saints, philosophers, scholars, and scientists who have, through the ages, selflessly illuminated the dark pathways of the human journey.

Read More:  The World Will Provide

4 thoughts on “The Death Of Che Guevara”