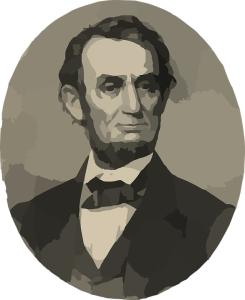 Ulysses S. Grant relates the following anecdote in his memoirs.

At one point while campaigning, Grant received a message from the Confederates that they wished to negotiate a settlement to the conflict.  They proposed to send a delegation to meet Grant.  Among the delegates was Confederate vice president Alexander H. Stephens.  Grant further relates:

I had always supposed that he was a very small man, but when I saw him in the dusk of the evening I was very much surprised to find so large a man as he seemed to be….I found that he was wearing a coarse gray woollen overcoat, a manufacture that had been introduced into the South during the rebellion.

The cloth was thicker than anything of the kind I had ever seen, even in Canada.  The overcoat extended nearly to his feet, and was so large that it gave him the appearance of being an average-sized man.  He took this off when he reached the cabin of the boat, and I was struck with the apparent change in size, in the coat and out of it.

Grant referred the delegates to President Lincoln, having no authority to deal with them himself.  He later discussed the matter with the president.  Lincoln was in one of his mirthful moods, as Grant tells us:

Right here I might relate an anecdote of Mr. Lincoln.  It was on the occasion of his visit to me just after he had talked with the [Confederate] peace commissioners…After a little conversation, he asked me if I had seen the overcoat of Stephens’s.  I replied that I had.

“Well,” said he, “didn’t you think it was the biggest shuck and the littlest ear [of corn] that you ever did see?”

Long afterwards I told this story to the Confederate general J.B. Gordon, at the time a member of the Senate.  He repeated it to Stephens, and, as I heard afterwards, Stephens laughed immoderately at the simile of Mr. Lincoln.

This story, relayed by Grant, is one of the many examples of the sly humor of Abraham Lincoln.