Skip to content
HomeMurder On The High Seas: The Weird Case Of Ansell Nickerson 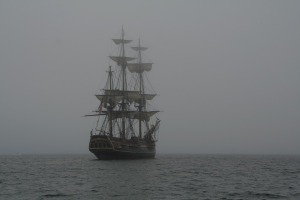 Justice, as we all know, does not always win out in the end.  Sometimes the wicked escape unpunished for their crimes, for a variety of reasons.  This seems to have been what happened with one strange murder case I read about recently.  It is notable for the involvement of the future president John Adams in the affair, as well as for the role that politics can play in criminal trials.

In November 1772, a twenty-three-year-old Massachusetts man named Ansell Nickerson was discovered alone aboard the schooner Abigail near Cape Cod.  The Abigail had been flying a distress flag, a fact that compelled other mariners to come to its aid.  The man who found Nickerson was amazed at the young man’s strange story.  The ship when found was in complete disorder:  blood was on the decks and various chests and casks had been smashed, as if the place had been the scene of a terrific struggle.

Nickerson stated that he had been traveling with four men from Chatham, Massachusetts.  The men were all in their twenties, with the exception of one boy of thirteen.  All of them save one were related, and Nickerson himself was the first cousin of two of the men.  The schooner was carrying a large cask of Jamaican rum, on which Nickerson had spent a large part of his life’s savings.  Rum in those colonial days was almost like currency, and was a commodity which could be freely sold in any port.

Nickerson claimed that, a day earlier, his vessel had been boarded by a party of British marines who were looking for American seamen to impress.  Impressment was a contentious issue for the American colonists; stories abounded of the British Navy boarding random ships to carry off men for service on the crown’s vessels.  Exact figures are hard to come by, but I’ve long suspected that the practice was not as common as American historians have often suggested.  But it did happen, and stories about it added to the incendiary anti-British atmosphere that was rife in Boston in the 1770s.

He stated that his fellow passengers had all been murdered and thrown overboard by either British marines or pirates (Nickerson was not entirely sure which), and that he had witnesses as much while hiding at various places on the schooner.  He said he heard the men debate whether they should then burn the ship.  They declined to do so, and then left. 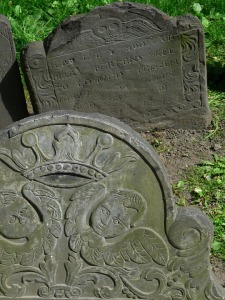 The ship and Nickerson were brought back to Boston.  He was questioned by various magistrates and government figures there, as his account was so strange that no one quite knew what to make of it.  But four men were apparently dead, and something had to be done.  The case immediately caused officials in Boston to become nervous.  The possibility that British seamen had murdered four Americans might cause severe civil disturbances; no one wanted to fan the flames of public discord that had been stewing for a long time already.

And yet it seemed clear that Nickerson’s story was fishy from the beginning.  It just didn’t seem to make sense.  Governor Hutchinson decided to appoint a special admiralty court of inquiry consisting of the governors of New Hampshire and Rhode Island, along with various other colonial officials.  The total number of panel members was eight.

Problems with Nickerson’s story immediately emerged from the fog.  He had first claimed that he hid from view by hanging by his hands from a certain rail aboard ship.  This was found to be impossible after measuring the spaces and distances involved.  After being confronted with the problems in his “hiding” story, he then quickly changed his account of what happened.  He stated that he had actually hid in another part of the ship.  Hutchinson, his suspicions now aroused, ordered Nickerson to be tried in Boston on December 15, 1772. 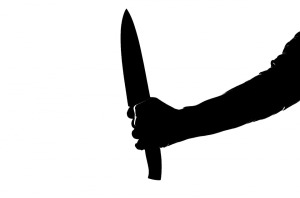 But sometimes things are not that simple.  Politics now injected itself into the picture.  Anti-British “patriot” factions in Boston were insisting on using the Nickerson case as proof of the perfidy and murderous inclinations of the mother-country.  They threatened to riot and cause property damage if Nickerson was convicted.  Others felt differently; and the affair became a local cause celebre. Hutchinson was not quite sure what to do with the case; for a time he even thought of shipping Nickerson off to England for trial.

Nickerson then made the brilliant move of hiring John Adams to represent him.  Adams, whose rising star would eventually carry him to the White House, had a nose for controversy and was probably the best criminal defense lawyer of his day.  The case eventually was heard in July 1773.  The prosecution was handicapped the lack of any substantial evidence or witnesses.  The only story that could really be examined was Nickerson’s and he was not admitting anything.  Adams was able to demonstrate that the evidence against him was insufficient to support a conviction.

Adams probably also benefited from the fact that a previous high-profile impressment case involving British marines (a now-forgotten event in 1769 aboard a ship named the Pitt Packett) was still fresh in the public mind.  That case had outraged local opinion in Massachusetts, and probably swayed the minds of the jurors in the case.  In that respect, Nickerson was just plain lucky.  His case had come along at just the right time for him to be acquitted.  Four voted to convict him, and four voted to acquit; it was a hung jury.  After being discharged by the court, he said only, “I thank the honorable Court, and God, for my deliverance.” Nickerson then vanished to history; I have not been able to find anything about him after this time.

There were some grumblings around Boston regarding the final outcome once tempers had cooled and it began to appear that a vicious murderer had escaped justice.  But the American Revolution came a few years later, and the trial was swallowed up in larger geopolitical events.  It was simply buried by the silt of history.  Adams himself later said, “[The case] was and remains a mysterious transaction.  I know not to this day what judgment to form of his Guilt or innocence.”

This is unconvincing, and Adams must have known it.  Yet his job as a defense attorney was to defend his client, and this is what he most capably did.  But will we ever know what happened aboard the Abigail?  Almost certainly not.  But I have my own opinion, backed up by nothing but speculation.  One can imagine a scenario where Nickerson and his relatives got into a ferocious argument; tempers may have flared past the point of no return.  One or more disputants could have been killed by Nickerson; and, in order to leave no witnesses, he could have killed the remaining passengers and thrown their bodies overboard.

This to me seems the most likely explanation.

If you enjoyed this little story, you may also enjoy my book Pathways, which contains a wealth of information on topics in history, biography, language, health, motivation, and thought.

One thought on “Murder On The High Seas: The Weird Case Of Ansell Nickerson”