At one point in the Gothic War during the reign of Justinian, the Romans (or as we would now call them, “Byzantines”) under Belisarius were besieging a Gothic garrison at the town of Osimo in Italy.  The blockade of the town was very effective, and the inhabitants had been reduced to eating almost anything to stay alive.  But they were hoping to get some relief from the siege; their plan was to beg the Gothic commander Vittigis at the city of Ravenna to come to their aid.

The problem was to get a message out of Osimo to Ravenna.  Some of the Goths realized that they could corrupt one of the Romans who was standing guard near the city at a checkpoint.  His name was Burkentius; the fact that he was of Gothic ancestry himself may have contributed to his infidelity.  The Gothic spies approached Burkentius and promised him a sum of money if he would deliver a message for them to Ravenna.  He accepted the sum of money and delivered a sealed letter to Ravenna, which basically begged Vittigis for relief.

Vittigis promised the garrison at Osimo relief, but would give little in the way of specifics.  He paid the treasonous messenger Burkentius more money, and sent him on his way back to Osimo.  When he rejoined his unit in Osimo, Burkentius of course concealed that he had acted as a messenger for the enemy, offering as an excuse that he had gone to Ravenna for medical treatment.  He was then placed back on guard duty, as before.

So the Gothic garrison at Osima held on, refusing to surrender, and was encouraged by Vittigis’s promises of relief.  Eventually Belisarius realized something was wrong; there was no real reason, he thought, why this garrison should be putting up such stout resistance.  There must be some reason he was unaware of.  What hopes were they hanging on to?  What information did they have?  To find out, he resolved to do what today would be called  “body snatch”:  that is, capture alive a Goth from Osimo and interrogate him about why the garrison was holding out for so long. 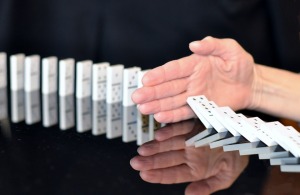 Using some of his Slavic troops, who were experienced in laying ambushes, Belisarius ordered one of his men named Valerianus to capture and question one of the enemy.  From this he was able to discover that the Goths had corrupted and bribed the Roman guard Burkentius.  The remainder of the tale is best told in the historian Procopius’s own words:

When he interrogated the prisoner about what basis of confidence and what assurance the Goths could possibly have that they were so absolutely unwilling to yield to the Romans and voluntarily enduring the most dreadful suffering, the barbarian told Valerianus the whole story concerning Burkentius, and when he was brought before him he proved his guilt.

When Burkentius perceived that he had been already found out, he concealed nothing of what he had done.  For that reason Belisarius handed him over his comrades to do with as they wished, and they not long afterward burned him alive, with the enemy looking on.  Thus did Burkentius profit from his love of money.

This is the story as it is told by Procopius.[1]

2 thoughts on “The Fate Of A Collaborator”