Skip to content
HomeThe Chilling Origins Of The “Sardonic Laugh”

One of the great things about history, literature, and philosophy is that these subjects have the ability to take us down dark rabbit-holes every now and then.  I think H.P. Lovecraft once said something like “seekers after knowledge haunt strange and dark places.”  I can’t remember the exact quote, but it was along these lines.  I was reminded of just how dark these can be last night as I was going through Procopius’s History of the Wars (a regular companion of mine for some months now).  Anthony Kaldellis’s wonderful edition of this neglected work proves once again that the right translation of a work can make all the difference in whether a book blossoms into life or falls flat.

But let me return to my topic.  I began my weird journey after coming across this passage in the Wars [VIII.24.39]:

This island of Sardinia was formerly called Sardo.  In that place there grows a certain herb that, if men eat it, a fatal convulsion immediately comes over them and they die not long afterward, giving the impression of laughing, as it were, because of the convulsion, and this laughter they call “Sardonic” from the name of that place.

In a footnote to this passage, editor Kaldellis states that “This was a common explanation of the origin of the term “sardonic laughter,” meaning a cruel, bitter laughter, but there were others…The plant was named Ranunculus Sardous (or Sardinian crowfoot).  In 2009 scientists discovered a hemlock water dropwart that can have such a facial effect (Oenanthe crocata).”  My imagination was now afire.  I had not heard of this strange plant before.  I checked Pliny’s Historia Naturalis and could not find any reference to it there.

Philology is one of my passions, so something like this could not fail to seize me by the throat.  The rabbit-hole went deeper once I googled the term Oenanthe crocata and came across the article that Mr. Kaldellis was apparently referring to.  It seems the “sardonic laugh” has a very sinister origin.  The article, written by James Owen and appearing in the National Geographic News in 2009, is reproduced below.

Thousands of years before the Joker gassed comic book victims into a grinning death, Phoenician colonists on the island of Sardinia were forcing smiles on the faces of the dead.

Now scientists say they know just how the ancient seafaring traders created the gruesome smiles some 2,800 years ago—not with a toxic gas like Batman’s nemesis but with a plant-based potion.  And someday that plant might be used to Botox-like effect, perhaps reducing rather than adding smile lines, the researchers speculate.

By the eighth century B.C., Homer had coined the term “sardonic grin”—”sardonic” having its roots in “Sardinia”—in writings referring to the island’s ritual killings via grimace-inducing potion.

Elderly people who could no longer care for themselves and criminals “were intoxicated with the sardonic herb and then killed by dropping from a high rock or by beating to death,” according to the new study.

For centuries the herb’s identity has been a mystery, but study leader Giovanni Appendino and colleagues say they have discovered a sardonic grin-inducing compound in a plant called hemlock water-dropwort.

The white-flowered plant grows on celery-like stalks along ponds and rivers on the island, now part of Italy.

About a decade ago, a Sardinian shepherd committed suicide by eating a hemlock water-dropwort, leaving a corpse with a striking grin.

The death spurred study co-author Mauro Ballero, a botanist at the University of Cagliari in Sardinia, to study every dropwort-related fatality on the island in recent decades.

For the new study, Ballero and colleagues detailed the molecular structure of the plant’s toxin and determined how it affects the human body.

Study leader Appendino, an organic chemist from the Università degli Studi del Piemonte Orientale in Italy, said, “The compound is highly toxic and causes symptoms similar to those described by the ancients for the sardonic smile, including facial paralysis.”

Hemlock water-dropwort “was already known to contain neurotoxins and was the most likely candidate for the sardonic herb,” Appendino said.

The hairy buttercup (aka the Sardinian buttercup) was also a candidate, but that plant doesn’t grow in the damp places mentioned in ancient texts, nor does it make sense in terms of its toxic properties, Appendino said.

“Besides, Sardinia is the only place all over the Mediterranean where [hemlock water-dropwort] grows,” he added.

A member of the deadly hemlock family, the herb is especially dangerous because of its fragrant smell and sweet-tasting roots.

“Generally poisonous plants are bitter or in some way repel people,” Appendino said.

Hemlock water-dropwort “is only the second case I know of a toxic plant that is actually attractive to our senses. People might easily eat it in a potion,” he added—or perhaps apply it in a lotion.

Appendino speculates that the plant may prove to have a cosmetic application.

“It relaxes the muscles,” he said, “so it removes wrinkles.”

This to me is fascinating on a number of levels.  The Phoenicians were one of the most influential–and at the same time most mysterious–peoples of antiquity.  They spread all over the Mediterranean as skilled traders (like their Lebanese descendants today), giving birth to the Carthaginians and leaving indelible footprints elsewhere; but we only know them through their enemies (i.e., Greeks and Romans).  No books or manuscripts have come down to us written in Punic or Phoenician (as far as I am aware).  Most of the information we do know about them is not flattering:  the Greeks grumbled at their cunning business practices, while the Romans hated the Carthaginians for their alleged trickery and deceit. 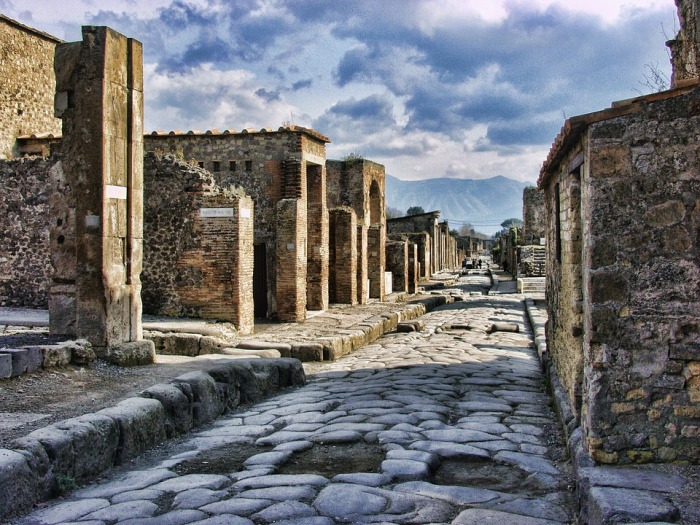 The fact that the plant was used for the execution of criminals is hardly surprising;  more unsettling is it to find out that it may have been used to do away with “elderly” people who could no longer care for themselves.  But then we must remember that these types of practices–cruel to modern eyes–are still found in remote peoples today in one form or another.  Perhaps the pressures of a limited food supply, and ignorance of medical knowledge would have made such things necessary.  Infanticide was also practiced in the ancient world with more regularity than many of us would like to admit; modern health-care structures simply did not exist, and families unable to care for surplus populations would take matters into their own hands.  We should be mindful of this before judging them too harshly.

But the Phoenicians, we can say with a smile, could still use some improvement in their public relations.  We hear stories in the classical texts that they (and their descendants the Carthaginians) practiced human sacrifice to their god Baal by tossing infants into ritual fires.  Are these accounts exaggerated?  It is not easy to give a clear answer.  Human sacrifice on occasion was done by many ancient peoples in times of extreme duress (including Greeks, Etruscans, and Hebrews).

In any case, this is the fascinating origin of the term “sardonic laugh.”  History always conducts us down edifying corridors.