Skip to content
HomeMoney Is Of Secondary Importance In War 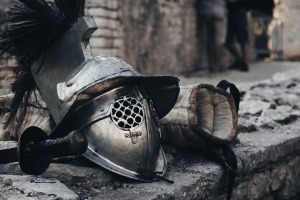 Human nature being what it is, there will always be many different reasons why wars begin.  All of these reasons ultimately find their roots in human passions:  greed, the lust for power, or simply a desire to “put fortune to the test” (fortunam temptare) as the ancient Latin historians would say.

But wars require resources, payrolls, and capable men.  Governments try to balance these factors the best they can in order to increase their chances of accomplishing their goals.  But it is not an easy matter:  no one really knows how effective one strategy or another will be until the struggle is actually joined.  And by then it may be too late if one side is found wanting.  Some belligerents think they can compensate for unpreparedness in one area by emphasizing their financial strength; and out of this arises the delusion that money can win wars.

Was there any king who had more money than Atahualpa, the last king of the Incas?  When the Spaniards came to Peru in 1531, they found a land rich beyond their dreams in metallic wealth.  Gold was to be had in abundance.  Yet Atahualpa thought he could leverage his money to preserve his life and the integrity of his kingdom.  In this he was mistaken.  The Spaniards captured and ransomed him; he offered to fill an entire room with gold and silver to secure his life.  The gold was accepted, but he was executed anyway.  The same point is made by Machiavelli in his Discourses (II.10):

Among the other things that Croesus, king of Lydia, showed to Solon the Athenian was a treasure too great to count.  Solon was then asked what opinion he had formed of the king’s power, to which he replied that he did not think him more powerful on this account, for war is made with steel, not with gold, and if anyone came along who had more steel than he had, he could deprive him of his power…

I assert, then, that it is not gold, as is commonly acclaimed by common opinion, that constitutes the sinews of war, but good soldiers; for gold does not find good soldiers, but good soldiers are quite capable of finding gold.  If the Romans had chosen to wage war rather by means of money than by the sword, not all the treasure in the world would have sufficed in view of the great enterprises they undertook and the difficulties they had to encounter in them.

So there you have it.  War is made with steel, not with gold.  Related to this point is the idea that one cannot buy one’s way into military preparedness:  throwing money around is no substitute for military virtue.  We see this principle illustrated today in the Middle East.  No country is more rich in monetary resources than Saudi Arabia.  They spend their petrodollars on the very best equipment and arms that money can buy.  But the combat quality of their forces is woefully lacking.  In any real fight, they would be unlikely to hold their ground for very long.  All of their expensive hardware would become burning piles of metals, fit only to decorate the empty landscape.  They have been engaged in a futile war in Yemen for several years now, and are no further along in accomplishing their goals than when they started.

There is more than one reason for this, of course; but behind them all lurk the perception that money can be a substitute for real power.  They learned the same lesson in the Syrian war, which is still underway.  They lavished huge sums on militias and proxy armies of dubious quality and reliability.  And this rabble was routed in the end by the dedicated, cohesive fighters of Hezballah and Iran, working in tandem with the Syrian government.  Training, discipline, morale, and fighting ability will always defeat money.

The United States has fallen into this trap as well.  In its Indochina War of 1963-1975, it dumped huge volumes of money and material into an abyss.  Its forces were very good, but it relied too much on money and logistics, and not enough on fire and maneuver consistent with its political objectives.  Perhaps the war was unwinnable under any circumstances; and this may indeed be true.  Yet the point about the addiction to monetary solutions stands.  Machiavelli again:

When I listen to hearings in Washington that discuss issues of military preparedness, I hear very much about money, budgets, and equipment.  I hear very little about how to create and sustain cohesive forces that can hold their own in a real fight against an equal force.  We will discover the folly of this way of thinking sooner than we believe.

In our personal lives as well we should be mindful of this principle.  Moral forces matter more than money.  Some people think that they can use money as a cover and as a substitute for taking real action in accomplishing a particular goal.  I am not saying money is not important, of course; but in the hierarchy of importance, it must be placed where it belongs.  You will not get in better physical shape by buying the most expensive pair of running shoes.  You will not learn any language faster by tossing money around in uninformed bouts of expenditure.  The attainment of goals is a matter of will, and strength of will cannot be bought for any price.

Check out the audio book version of Thirty-Seven today.