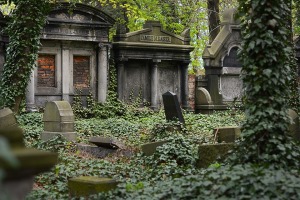 Many forget that we should learn to be wise enough to laugh at the world and ourselves.  Without laughter–the universal tonic for all melancholic maladies–it becomes ever easier to take ourselves too seriously, and to retreat into comfortable recesses of our own minds that promise nothing but stagnation and sterility.  This may be the unconscious message of the humorous epitaph:  a warning to the living that our time here is not unlimited, and that unless we appreciate the idea of memento mori, we are living in delusion.  Few things are so grim that we cannot make light of them somehow.

In 1900, Arthur Wentworth Eaton published a now-forgotten volume called Funny Epitaphs.  It is a slim book, barely amounting to eighty pages.  I bought it at a used book fair yesterday for a dollar.  Eaton provides no information on how he collected the epitaphs; apparently they were just noted by him in his travels through the North Atlantic and the British Isles.  Here are a few of them.

Of this world’s wonder, Captain Jones,

Who told his glorious deeds to many

Yet was never believed by any.

He swore all’s true, yet here he lies.

Beneath this stone of granite hard

Lies my own beloved pard.

In a cemetery in Lyme, Connecticut:

Close behind this stone

When ends her life,

And we both are freed from starvin.’

He lived one hundred and five,

A hundred to five,

You live not so long.

On a miser’s headstone:

Here lies one who for medicine would not give

A little gold, and so his life he lost;

Could he but guess how much his funeral cost.

He fell in the water and never got out,

And still is supposed to be floating about.

Here lies one Box within another;

The one of wood

We cannot say so much for t’other.

Sacred to the memory of Miss Martha Gwynn,

Who was so very pure within,

She burst the outer shell of sin,

And hatched herself a cherubim.

Who lived an old woman,

And died an old Mann.

In every state, as widow, maid, or wife;

Who wedded, to threescore preserved her fame,

She lived a phoenix, and expired in flame.

Some have children, some have none;

Here lies the mother of twenty-one.

Here I lie, taken from life.

Fate cuts the thread of life, as all men know,

And fate cut his, though he so well could sew.

It matters now how fine the web is spun,

‘Tis all unravelled when our course is run.

A wood-cutter at Ockham, Surrey:

The Lord saw good: I was lopping off wood,

And down fell from the tree;

I met with a check, and I broke my neck,

And so Death lopped off me.

Lie heavy on him, earth, for he

Laid many a heavy load on thee.

Who died at noon and saved a dinner by it.

It was a cough that carried him off,

It was a coffin they carried off in.

Beneath this stone our baby lies,

It neither cries nor hollers,

It lived but one and twenty days,

And cost us forty dollars.

Death did him no hurt;

When alive he was mud,

Now he’s nothing but dirt.

And what is somewhat rarish,

He was born, bred and

Hanged in this parish.

Our bodies are like shoes, which off we cast,

Physic their cobblers, and Death their last.

On a man named John Phillips:

Accidentally shot as a mark

Of affection by his brother.

All my tears cannot bring her back;

Great God, can this poor soul be saved.

This monument was erected by her

Husband as a tribute to her memory

And a specimen of his work.

Monuments of this same style are 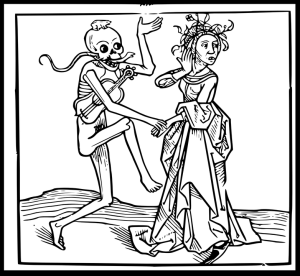