Skip to content
HomeWhen Embarked On A Great Enterprise, Do Not Look Back

When you have begun a great project, press forward until it is completed.  Do not look back; do not be distracted by the ambient noise of life, the doubting whispers of others, or the gnawing doubts that will inevitably bore their way into your consciousness.  Nothing great was ever accomplished by half-measures; and the failure of grand ambition is still more inspiring than the cautious steps of the timid man.  In a 1368 letter to Pope Urban V, the humanist Petrarch wrote the following words that I happened to read this morning:

And this means, “He who achieves notoriety through a glorious project will not avoid disgrace if he voluntarily abandons it…Never pause:  time is short, the road is long, and the hope of reward softens the weight of labor.  Finally, never look behind you.”  We live in an age of samplers, braggarts, dilettantes, and buffet-pickers; lacking the fortitude to stay the course on any great project, such people are likely to give up and drop their packs at the first indications of hardship.  This is their mentality.  This is not how character and greatness are forged.  But why is it so important not to look back once you have begun a great enterprise?

You will lose two critical things needed for the race:  momentum and speed.  No racing coach ever counseled a trainee to look back at his opponents while he was running a race.

Looking back can be psychologically crippling.  Nostalgia and sentimentality have led many a man to ruin.  Instead of being focused on the job at hand, you instead become consumed with the images and memories of the past.  Even worse, doubts begin to grow in your mind whether you have made the correct decision. 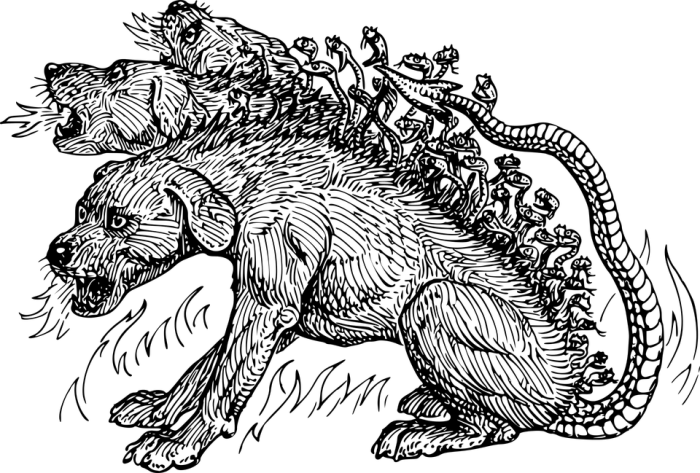 Cerberus, guardian of the underworld

This principle of not looking back was, I believe, the origin of the famous myth of Orpheus and Eurydice.  It is told in Virgil’s Georgics IV.453 et seq.  The gist of the myth is that Eurydice was bitten by a snake and died; her lover Orpheus went to Hades to beg for her return to the world of the living.  This wish was granted him by Hades, but on one condition:  she would have to walk behind him, and he could not turn around and look at her until they had both reached the light of the upper world.  In other words, he had to exercise patience and discipline.  This, however, he was unable to do.  He could not resist looking back during the journey, and for this he forfeited his chance at happiness.  At the very moment Orpheus looked back, says Virgil, “All his labor melted away, his deal with the stern tyrant [Hades] was breached, and the crash of thunder was heard three times among the waters of Avernus.”

The same point is made in the Hebrew scriptures; we find in Genesis 19 the tale of Lot’s escape from Sodom with his wife and daughters.  Lot was ordered not to look back once he left Sodom.  But for some reason, his wife either could not or would not listen to this counsel.  She was turned into a pillar of salt.  The text of Genesis 19 relates the story:

As soon as they had brought them out, one of them said, “Flee for your lives! Don’t look back, and don’t stop anywhere in the plain! Flee to the mountains or you will be swept away!”

But Lot said to them, “No, my lords, please! 19 Your servant has found favor in your eyes, and you have shown great kindness to me in sparing my life. But I can’t flee to the mountains; this disaster will overtake me, and I’ll die. 20 Look, here is a town near enough to run to, and it is small. Let me flee to it—it is very small, isn’t it?…

Then the Lord rained down burning sulfur on Sodom and Gomorrah—from the Lord out of the heavens. 25 Thus he overthrew those cities and the entire plain, destroying all those living in the cities—and also the vegetation in the land. 26 But Lot’s wife looked back, and she became a pillar of salt.

The point made here is that sometimes we must make a clean break with the past.  The ghosts of nostalgia can only haunt us for so long before they become impediments to advancement.  It is a mistake to think that a multiplicity of options somehow produces happiness:  it does not.  It is more common that too many options only serve to confuse and demoralize us.  A soldier is happiest on a long march when he only has the pack of the man in front of him to contemplate.  He does not need to think about other options except moving forward and fighting.  This is why Hernan Cortes famously burned his ships when he had arrived on the coast of Mexico and sought to conquer the Aztec empire.

One final illustration of this principle I will relate here.  The military historian Frontinus tells us (Stratagems IV.1) that when the Roman general Q. Metellus Macedonicus was conducting operations in Spain, some of his units–five cohorts, to be precise–happened to fall back before the enemy.  He was not pleased.  He ordered the men to make out their wills, and sent them back into battle, with orders that they would not be received back into camp unless they were victorious.  The only two options were victory or death.  This is what I mean when I use the word motivation.

So keep your head down, stretch our your legs, swing your arms, and keep moving.  Do not look back.

Learn more about this and other principles in my new annotated translation of the great historian Sallust:

5 thoughts on “When Embarked On A Great Enterprise, Do Not Look Back”