The Persian king Shapur II (A.D. 309–379) decided early in his reign to recover by force several of the Roman Empire’s eastern provinces, especially the rich lands of Mesopotamia and Armenia.  In the year 359 he focused his attention on capturing the city of Amida; the city was located in the spot currently occupied by Diyarbakir in Turkey.  Its extended siege and dramatic fall are recounted in detail by Ammianus Marcellinus, whose account (Res Gestae XVIII.9) forms the primary source for the present article.  The historian was personally present during the siege and took part in its defense, and his account of the battle forms one of the most dramatic episodes of his book.

Ammianus tells us that the city’s south side rested against the banks of the river Tigris.  From its location, it looked down on the Mesopotamian plan; and within its thick walls was a fresh spring and a large garrison of troops.  Its primary detachment was the Fifth Legion (“Parthica”), augmented by some native troops.  Six additional legions had arrived to Amida to assist in the defense of the citadel.  Within its walls was also a squadron of mounted archers (comes sagittarii) who were well-known for their capability and endurance.

When Shapur approached the city, Ammianus says that mail-clad cavalry and “shining weapons” were visible to the defenders as far as the eye could see.  He rode up to the city gates and sent emissaries to demand the city’s surrender; he was refused and personally attacked by the defenders.  In a fury, he resolved not to rest until the city was stormed by force.  The Persians surrounded the entire walls of the city and put it to unrelenting siege.  “Looking out on so many people whose goal it was to destroy us and set fire to the Roman world, we gave up any hope of rescue; from this point our goal was to leave this life with glory.  This was the goal of all of us.” (XIX.2).  Ammianus goes on to give a detailed account of the battle that raged back and forth between the attackers and the defenders.  Profusions of arrows darkened the air; fixed defensive weapons called “scorpions” (scorpio) fired day and night at the attackers; and clouds of dust blotted out the sky during the day. 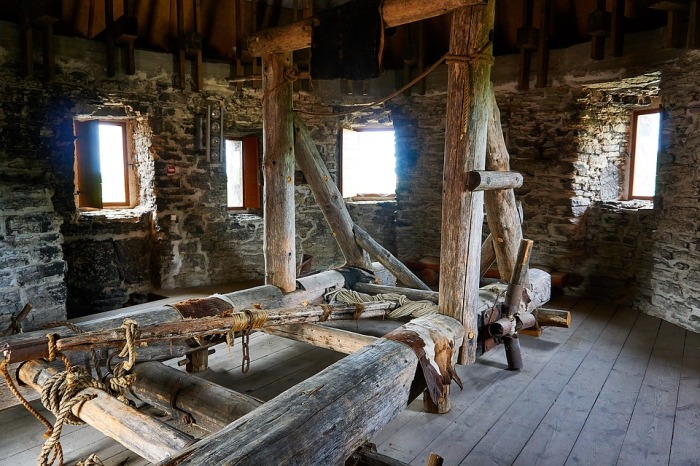 After the fifth day of battle, both sides agreed to a temporary truce.  Ammianus says that the cries of the wounded were terrible, since not much could be done for them; and within the cramped walls of Amida were huddled a total of 120,000 people (both civilians and soldiers).  The wounded tried to help themselves as best they could.  Many expired gradually from loss of blood, or died quickly when they tried to remove arrows themselves from their bodies.  Bodies began to pile up in the streets and inside dwellings.  As if things could get any worse, a plague epidemic broke out after the tenth day of the siege; yet for some reason the disease dissipated, according to the historian, by the falling of “a light rain.”

But by this time Shapur had constructed siege-towers and mantlets all around Amida’s walls.  Tunneling activity also began to take place; the idea was not so much to burrow into the city, but to undermine the walls’ foundations and thereby cause them to collapse.  A detachment of Gauls happened to be located at Amida; Gauls came from a long warrior tradition and demanded to be allowed to engage with the Persians outside the city walls.  When they were denied, they “gnashed their teeth like wild animals” in frustration.  But treachery, which so often plays a part in ancient battles, was present in the air.  A deserter from the city allowed a small band of Persians to gain access to the city through a subterranean passage near the Tigris.  Once this band was let in, their comrades outside the walls attacked again in force.  Ballistae, scorpions, and archers rained projectiles on the attackers; and somehow the defenders managed to hold their position, forcing the Persians to back away from the walls.  As the historian says (XIX.6):

So fortune breathed on us some feeling of safety.  [Adspiravit auram quandam salutis fortuna]

This feeling would prove to be short-lived.  The decision was finally made to unleash the Gauls on the enemy.  They were by this time literally hacking the walls of the city with their swords, behaving more like caged animals wishing to fling themselves on a tormentor.  They burst out of the gates and attacked the Persians who were building siege-mounds, as well as other units stationed a greater distance away.  These attacks caused the enemy great damage, and the Gauls returned to the city in triumph.  A three-day truce was then declared.

But in the long-term, there was little hope that the bottled-up defenders could long last against Shapur’s army.  He was patient and methodical:  he ordered mounds and siege-towers to ring Amida’s walls once again.  The mounds were especially dangerous, because once built, the attackers could mount assaults directly over the city’s walls.  To his credit, the Persian king himself (according to Ammianus) entered the battle like a common infantryman; in those days, kings did not die in their beds.  For a long time, we are told, the battle was undecided.  And then, says Ammianus (XIX.8),

In other words, Fortune began to take control of events.  The precipitated the final destruction of the city was the collapse of one of the mounds that had been built for the city’s defense.  It fell forward as if leveled “by an earthquake” and opened up a huge gap in the city’s defenses.  Defenders and attackers both poured into the gap to join in hand-to-hand battle, and terrible carnage ensued.  But nothing could hold back the tide of the enraged attackers, and they burst into Amida.  After participating in the defense for a short time, Ammianus himself apparently realized that all was lost, and resolved to make his own escape with a few of his comrades.  In one night, he says, he was able to make ten miles on foot, primarily because of his “acquaintance with the area.”  But it was not easy, worn down as he was by thirst and lack of food.  He would eventually find his way back to Roman Syria and to safety.

Thus was Amida taken in a dramatic siege, vividly described by a capable historian.  Two final incidents have remained in my mind from reading his account.  A day or so after making his escape from the city, he happened to see a ghastly and surreal sight.  He saw a horse wandering alone in the countryside, without saddle or bit.  One of its reins dragged the shattered fragments of a corpse.  What had happened was that a rider, inexperienced in horsemanship, had tied his hand to one of the horse’s reins.  When he was thrown off the saddle, he could not extricate himself, and so was dragged to his death over the rocks of the mountainous deserts.  Most of his body had been torn away, but the arm and torso were still attached to the horse’s rein.  The sight was disturbing enough for Ammianus to comment on it vividly.

The final sight that he records is also somehow unforgettable.  He tells us that the corpses of Romans lying in the countryside quickly rotted in the open air, to an extent that they were not recognizable after five days or so.  Yet the bodies of the Persians, he says, shriveled up like desiccated trees, without completely decomposing.  Ammianus attributes this difference to the more simple diet and lifestyle of the Persians.  It is difficult to know what to make of this comment, but it is a memorable one regardless.

Read more about great struggles for survival in Thirty-Seven and Pantheon.