Skip to content
HomeCharles Sturt: A Pioneer Of Australian Exploration 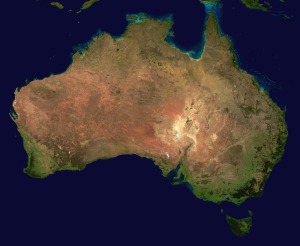 The student of the history of exploration and discovery cannot fail to notice certain recurring patterns in the lives of great explorers.  Many of them come from modest or poor backgrounds; many have military experience; many are driven by an inner conviction that they are destined for great achievements; many have a high tolerance for pain and hardship; and some of them have combative or disputatious natures that make them difficult to get along with.  Not all of these generalizations are found in every explorer, of course.  But it cannot be denied that a certain personality type is well-suited to a life of exploration.

We will consider here the life of Charles Sturt, one of the most important leaders of land expeditions in Australia.  I expect Australian readers well acquainted with Sturt’s career will review this article with tolerant smiles, noting how much information I have of necessity omitted.  But it should be kept in mind that the names and events of Australian exploration are almost totally unknown (even in the English-speaking world) outside of Australia.  This obscurity is a fate that has sadly befallen many of the great names we have described in these pages.  It is my goal to help correct this situation.  We will be accomplishing something, I think, just by providing a taste for the interested reader of some great deeds in the history of this fascinating land, that is both a continent and a country.

He was born in Bengal in colonial India in 1795, the son of a British judicial official.  At an early age he was sent to England for schooling; an attempt to enroll in Cambridge University in 1812 did not meet with success, primarily due to his family’s financial circumstances.  So, like countless young men before him, he chose the military as a way to seek glory and professional security.  He saw service in the wars of his era, traveling to Canada and back.  As a captain, he was appointed to escort convicts to Australia; in 1827 he arrived at Sydney, and this was the start of his enduring fascination with the country.  Here, he believed, was a place he could make his mark, without being burdened by the stifling rules of social caste and lineage that would always be present in Europe.

Sturt developed an interest in riverine exploration as the key that would unlock the secrets of Australia’s interior.  We must remember that, in his era, the interior of the continent was practically a blank slate.  Sturt’s experiences in Canada’s wilds had led him to believe that rivers were the arterial vessels of any land, and that he who mastered the rivers would master the country.  Fed by rumors and stories he heard from the natives, Sturt also believed there was a large “inland sea” in the center of the continent, and he was determined to locate it.  The governor of New South Wales, Sir Ralph Darling, recognized him as a man of ability and resourcefulness, and agreed to sponsor an expedition to explore the Macquarie River.  Completed in 1829, this early expedition whetted his appetite for additional forays.  That year he set out on an epic journey of exploration of the Murray and Murrumbidgee Rivers.

The results of these explorations was his book, Two Expeditions into the Interior of Southern Australia during the years 1828, 1829, 1830 and 1831.  We are gratified that these early explorers felt compelled to record every detail of their travels.  Interesting are some of his revealing thoughts on his emigration to a new country:

But to sever the links of kindred, and to abandon the homes of our fathers after years of happy tranquility, is a sacrifice the magnitude of which is unquestionable. The feelings by which men are influenced under such circumstances have a claim to our respect. Indeed, no class of persons can have a stronger hold upon our sympathies than those whom unmerited adverse fortune obliges to seek a home in a distant country.

Far, therefore, be it from me to dispute a single expression of regret to which they may give utterance. It must, however, be remembered that the deepest feelings of anguish are providentially alleviated in time. Our heaviest misfortunes are frequently repaired by industry and caution. The sky clears up, as it were: new interests engage the attention, and the cares of a family or the improvement of a newly acquired property engross those moments which would otherwise be spent in vain and unprofitable regrets.

It cannot be doubted that persons such as I have described, whose conduct has hitherto been regulated by prudence, and whose main object is to provide for their children, are the most valuable members of every community, whether young or old. To such men few countries hold out greater prospects of success than New South Wales; for the more we extend our enquiries, the more we shall find that the success of the emigrant in that colony depends upon his prudence and foresight rather than on any collateral circumstance of climate or soil; and to him who can be satisfied with the gradual acquirement of competency, it is the land of promise. [p. lxi]

Here Sturt relates the formidable heat of Australia’s climate, which he experienced near Buddah Lake:

The sun’s rays were too powerful even for the natives, who kept as much as possible in the shade. In the evening, when the atmosphere was somewhat cooler, we launched the boat upon the lake, in order to get some wild fowl and fish; but although we were tolerably successful with our guns, we did not take any thing with our hooks. The natives had, in the course of the afternoon, been joined by the rest of the tribe, and they now numbered about three and twenty. They were rather distant in their manner, and gazed with apparent astonishment at the scene that was passing before them.

If there had been other proof wanting, of the lamentably parched and exhausted state of the interior, we had on this occasion ample evidence of it, and of the fearful severity of the drought under which the country was suffering. As soon as the sun dipped under the horizon, hundreds of birds came crowding to the border of the lake, to quench the thirst they had been unable to allay in the forest. Some were gasping, others almost too weak to avoid us, and all were indifferent to the reports of our guns. [p. 16]

Sturt’s work was greeted with excitement in England, for his explorations confirmed the fact that the country was a unique habitat unlike any other in the world.  In 1835 he returned to Australia from England and occupied himself with farming a large tract of land; after settling in Grange, South Australia, he was appointed Surveyor-General there.  But the call of exploration continued: he undertook an expedition on the Murray River in 1839, and continued to obsess about the possible existence of an inland sea in central Australia.

In 1844 he finally got his chance to search for an inland sea.  With a party of men he advanced into what is now Sturt’s Stony Desert and the Simpson Desert, but was unable to continue, due to extreme heart and his debilitation by scurvy.  He took a break from exploration for a few years, returning to England in 1847 but coming back to Adelaide in 1849.  His later years were marred by personal tragedy and disappointment:  one of his sons died in India, and he was unsuccessful in attempts to seek government positions he believed he deserved.  He died suddenly in 1869, primarily due to the mileage he had put on his body by years of hard traveling.  But he left behind him a legacy that would inspire the next generation of discoverers.  So does the spring of courage nourish all those who visit its waters. 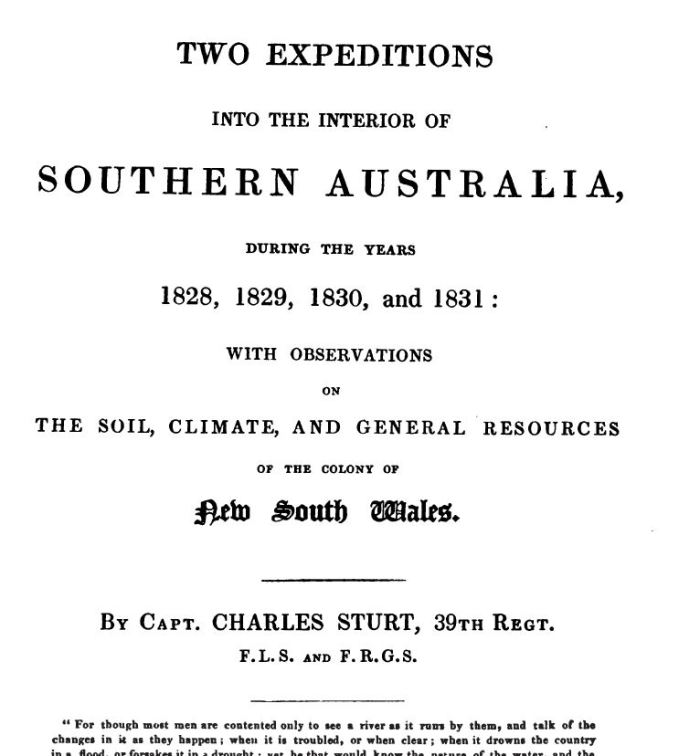 His books live on as testament to his fortitude.  I believe we can give him no better epitaph than these stirring words which he wrote in 1849 in his Narrative of an Expedition into Central Australia:

To that man who is really earnest in the performance of his duty to the last, and who has set his heart on the accomplishment of a great object, the attainment of which would place his name high up in the roll of Fame; to him who had well-nigh reached the topmost step of the ladder, and whose hand had all but grasped the pinnacle, the necessity must be great, and the struggle of feeling severe, that forces him to bear back, and abandon his task.

Let any man lay the map of Australia before him, and regard the blank upon its surface, and then let me ask him if it would not be an honourable achievement to be the first to place foot in its centre.

Great men do not abandon their goals at the first sign of discomfort or trouble.  They press on, fortified by an inner conviction that gives them the moral right and duty to push beyond ordinary limits; and, by so doing, they mark the upward progress of knowledge and civilization.

Read more about struggle, achievement, and triumph in Pathways: