Skip to content
HomeThe Monkey Atop The Ship’s Mast, And How To Deal With Him 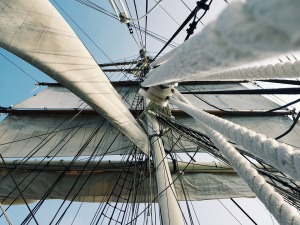 A nineteenth-century volume of nautical lore provides the following story of a strange incident at sea.  In 1818 there was a ship—its name is not recorded by the tale’s author—on its homeward voyage from Jamaica to Whitehaven, England.  One of the passengers was a young mother with her infant child, who was only several weeks old.  One day, the ship’s captain saw something on the horizon, and offered his spyglass to the mother, so that she might for herself see what it was.  She wrapped her child in her shawl and placed it carefully on the seat where she had been sitting.

Ships in those days often carried animals as mascots; and this particular ship happened to have what is described as “a very large” monkey on board.  Monkeys are intelligent animals, as is well known; and this particular one was a mischievous one as well.  No sooner had the woman laid down her infant, than the monkey seized the child, wrappings and all, and headed for the ship’s main deck.  It then began to climb the main mast, somehow managing to hold the child as it scrambled higher and higher.  The shocked crew could do little more than look on in horror; the mother was frantic, her mind filled with the worst possible thoughts.  It was not just that the monkey could drop the infant; there was the possibility that it might do violence to the child.  Yet as they looked up, the crew were surprised to see the monkey caressing and stroking the crying baby, apparently trying to soothe its anxieties.  Says the anonymous author of the Book of Shipwrecks and Narratives of Maritime Discoveries (1840):

The sailors could climb as well as the monkey, but the latter watched their motions narrowly; and as it ascended higher up the mast the moment they attempted to put a foot on the shrouds, the captain became afraid that it would drop the child, and endeavor to escape by leaping from one mast to another.  In the meantime the little innocent was heard to cry; and though many thought it was suffering pain, their fears on this point were speedily dissipated when they observed the monkey imitating exactly the motions of a nurse, by dandling, soothing, and caressing its charge, and even endeavoring to hush it asleep.

The captain must have been a man of sound intuition, for he crafted a plan that defused the situation.  He had the mother taken to his cabin, so that she not fret and create undue commotion; he then had all the ship’s crew sent below deck.  He himself took up a position on the cabin stair, so that he might be able to see what the monkey was doing, without it seeing him.  This plan entirely succeeded.  The monkey, seeing that it was not the center of attention any more, lost interest in its perch atop the mast; it climbed down, the infant still in its arms, and returned the baby to the precise spot from which he had taken it.  And that was all:  “the babe was restored to its mother’s arms, amidst tears, and thanks, and blessings.”

Often we do notice, that when panics and hysterias take hold of a group, it is only the determined voice of reason that prevails.  Some thrash about noisily, seeking to take advantage of the collective fear to garner attention and influence for themselves; this type of person is particularly odious, for he shows himself to be a selfish parasite on his fellows.  Others sit in paralyzed silence as a crisis unfolds, afraid to take any kind of action, desiring refuge in denial or delusion.  He who fashions intelligent solutions in a crisis is rare indeed, for there is a certain philosophic disposition that one must have, whether it be conscious or unconscious.  Misfortunes and sufferings must be seen as temporary and impermanent.  It is the same type of perspective that was described by our beloved Petrarch in a 1363 letter to Giovanni Boccaccio, mourning the deaths of his friends Angelo Tosetti and Francesco Nelli from the plague that was then sweeping Italy:

Clearly some sick people obtain a kind of cure for their ills by moaning abundantly, as if they are diminishing the sensation of misfortune by wailing.  There are some who, when tired, do not rest until they have voiced deep sighs and light murmurs, as if the pillow lays out better with such noise, and those faltering voices were like soft feathers…[I want] to look down equally on hopes and fears, joys and woes…The day approaches when none of those things that now becloud or brighten our lives with such severity, will affect us at all.

Petrarch’s meaning could not be any clearer, but it is a sentiment that is often lost on us, as we run about the ship’s deck, our terrified eyes directed aloft, wondering if the monkey is going to drop the infant.  This is something that we have no control over.  To act decisively in a crisis, and to keep one’s mouth free of attention-seeking, inflammatory language:  these are the responsive traits that a man must cultivate.  We are only the latest custodians of a world that has been trod by a hundred thousand generations before us; who are we to believe we are anything but the fleeting tenants of a building that stands for all eternity?  Well?  It was with these same thoughts that the Italian author Alessandro Verri wrote the following words in his mystical Roman Nights (1792):

O my mother!  Nothing can escape the waste of time. Those encroachments which we now suffer, nations proudly eminent have suffered before us.  Ages progress like waves on waves, until they overwhelm the monuments of human greatness, and plunge them into the gulfs of eternal oblivion. Generations appear and disappear like the flitting of shadows. The dead occupy all the earth; it is altogether filled with the relics of past beings; and the living still tread under foot the mold once animated with the breath of life.  In this immutable succession, the proud mausoleum, the humble grave, the lamented ashes, become each in turn, the light, fugitive dust, dispersed abroad through the elements. Contend not, my mother, against the laws of destiny. [1850 ed., p. 57]

It is no use leaping up one mast-head after another, frantically chasing the monkey; in doing this, we only exacerbate the situation, and play into his mischievous hands.  He will leap and scramble better than we, and he will make fools of us all.  And yet some men cannot formulate rational plans, free of hysteria’s taint; they believe they can control all, and direct all, for their own selfish ends.  For such a mentality, we can only agree again with Petrarch, who said in a 1341 letter to Giovanni Colonna:

Human temerity kicks convulsively against the stick that drives us, and battles in vain with the horns of its own hubris against forward-rolling Fate, only to collapse more painfully when defeated.

The mischievous monkey aloft will not do something just because we wish him to do something.  He will do what he wants, when he wants; and he can only be confronted with a specific and rational plan.  We must not be like those whom Petrarch scorned, those men who believe that “moaning abundantly” will serve as a tonic to their ills.  Sighing and whimpering will not cause the pillow to stretch out any softer, or make our sleep any sounder.  Things are as they are, not as we wish them to be; the best we can do is apply unrelenting efforts to a worthy goal, while being mindful of the hand of Fate that truly determines the course of all events.

Read more in the comprehensive and unique Digest: