There is a preparatory plaster statue, very finely executed by Eduardo Barrón, on display at the Museo Nacional del Prado Museum in Madrid.  It is called Nero and Seneca, and it was completed in 1904.  Barrón never produced a final version in marble or bronze; and although it remains a preliminary study, it is a powerfully evocative depiction of two strong personalities.  Seneca points at a passage in an unrolled book before him, and is leaning towards Nero, evidently to make some pedagogic point.  The young Nero, whom Seneca had the misfortune to tutor, remains slouched in his chair, a clenched fist pressed against his temple in sullen opposition to the lesson his teacher is attempting to expound.

There is no engagement between these two isolated figures; what we see are two men whose unbridgeable divergence in personalities render them unable to connect.  Over time, Nero would grow to resent the elder Stoic’s admonitions as disposable cant.  And with time, this resentment would evolve into a murderous vengefulness that could only be placated by his tutor’s death.    What does one do, when placed on the horns of an impossible dilemma?  Nero remains a controversial figure to this day; we only know him through the writings of aristocrats who hated him, like Suetonius and Tacitus.  There is always the possibility that history has wronged him, that we only know half the story.  I personally do not believe this to be true.  We may not know everything, but what we do know is corroborated enough for us to conclude that Nero was a vicious incompetent, a man whose influence was almost entirely pernicious.  And what should someone do, who finds himself in his employ?  Does he stay around, and hope for the situation to improve?  Or does he flee for his life, and choose a voluntary exile?

Seneca was a wealthy and prestigious man.  He knew of the poet Ovid’s miserable fate, whom Augustus had banished to lifetime exile far from Rome, to a speck of turf among the barbarians ringing the Black Sea.  Seneca liked his houses, his life, and his position; he probably felt that he was too old to set out for greener pastures.  He had been banished before, to Corsica in 41 A.D., but was called back to the capital at Messalina’s prompting in 49 A.D.  Yet it would have been a relatively easy matter for him to live in Athens, where it is unlikely he would be bothered, and where there was an educated cadre whom he could relate to.  Cicero’s friend Atticus had spent time there, fleeing the persecutions of his own day; and Cicero himself was likely on his way to Athens when he was intercepted and murdered by Antony’s assassins.  One would like to ask Seneca what Petrarch, writing fourteen centuries later, himself asked Seneca:  Sed quo pergis, O miser?  That is:  Miserable man, what is your goal?

But Seneca refused to leave Rome.  He had taken advantage of his position as one of Nero’s advisor’s to amass a great fortune for himself:  he enjoyed houses (in Nomentum, Alba, Baiae, and other places), wealth, and considerable prestige.  One house he had near the Porta Capena was called by Juvenal “great gardens” (magni horti).  He probably thought he could walk that fine line with Nero, that he could appease the tyrant enough to keep placated, without getting close enough to him to besmirch his own dignity.  I am sure that he convinced himself that he was adroit enough to do this. 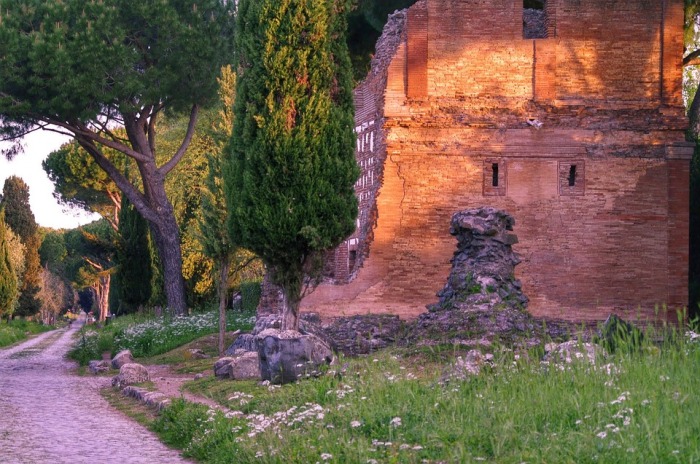 And yet sometimes fine lines cannot be straddled; one must come down on one side or the other.  Being in proximity to a tyrant, in whatever capacity, carries its own severe risks.  The clouds of danger are never banished from the skies.  It is as William Falconer says in The Shipwreck:

And lawless surges swell against the skies,

Till Hope expires, and Peril and Dismay

Wave their black ensigns on the watery way.

And of course Falconer’s verses reveal an inescapable truth.  So it was Seneca’s fatal mistake to think that he could placate Nero, or avoid his irresistible impulses; for all his wisdom, he failed adequately to assess the risk that his former pupil posed to his safety.  The emperor’s malignant eyes would inevitably fall on him, and there was no one to come to his defense.  For philosophers walking the halls of power live friendless lives.  The conspiracy of Piso in 65 A.D. finally gave Nero the pretext he needed to rid himself of Seneca’s irritating presence.  He must have signed the old man’s death warrant with the same coy smirk that had adorned his face during their tutorials in ethics and rhetoric; for now at last, he must have thought, he would avenge himself on this emaciated old fraud, this unctuous hypocrite who talked ceaselessly of denial and moderation while amassing a colossal horde of material possessions.  As Petrarch said in his letter to the deceased philosopher:

And this means, O miserable old man, you fell into the hands of a man who could do whatever he wanted, and who could want only the worst.  Seneca was intercepted while returning to Rome from Campania along the Appian Way.  He was staying at one of his villas about four miles from the city.  A praetorian tribune named Granius Silvanus surrounded Seneca’s residence with a detachment of men, and presented to him Nero’s writ of execution.  The drama that followed is movingly described by Tacitus in his Annals (XV.63).  Seneca tried to console his friends, telling them that they should remember the lessons of philosophy, and embrace death with steadfastness and courage.  His wife, Pompeia Paulina, was inconsolably distraught; he tried to comfort her, but she was determined to follow him to the grave.  He finally gave his consent.

The old man opened his veins, but the blood would not flow, probably due to a combination of factors related to his age, slight figure, and asthma; to save his wife the sight of his suffering, he asked her to leave him, and called for a scribe to record his last words.  A friend and physician, Statius Annaeus, gave him hemlock to drink, but the poison produced no effect.  Finally he removed himself to a steam bath, where he eventually lost consciousness; Tacitus says that, before immersing himself in the heated waters, he sprinkled some of it on the slaves attending him as an offering to “Jupiter the Liberator.”  Soon after this he died.  Whatever else we may say about Seneca—and perhaps there was a bit too much affected drama in those final moments—it cannot be denied that he met his end in accordance to the Stoic virtues he preached to others.

Yet this is not the end of the story.  Parts of the Appian Way were excavated from 1852 to 1853 on the instructions of Pope Pius IX.  Near the fourth milestone, artifacts likely connected to the death of Seneca were unearthed.  The scholar Rodolfo Lanciani, in his New Tales of Old Rome, tells us that the lid of a sarcophagus was recovered, upon which was inscribed a scene depicting the death of Atys, the son of Lydian King Croesus.  The death of Atys is mentioned in Herodotus (I.35 et. seq), and may be an oblique reference to the death of Seneca.  A portrait head bearing a strong resemblance to Seneca was also recovered, along with some other relics connected with a first century A.D. tomb.  Realism in portraiture was a specialty of the Romans; it is doubtful that the resemblance could be an accident.  Yet how could this be?  Tacitus says that he was cremated, not interred; but perhaps Tacitus was misinformed, or perhaps the tomb contained an urn holding the old philosopher’s ashes.  We cannot know with certainty.

There may still be some link here to Seneca.  Lanciani reports that in 1824 an inscription was found in this same area referring to a Quintus Granius Labeo, son of Marcus Granius Labeo, a tribune of the third legion (Corpus Iscr. VI.3521).  According to Lanciani, Granius was the name of the very officer who had delivered Nero’s writ of execution to Seneca.  It appears that he was given Seneca’s villa—the villa in which he had met his death—as a reward for loyal service to Nero.  When Granius himself died, the property was then passed on to one of his own heirs.  In this strange way, through the property they both occupied, are Seneca and his executioner still bound together, even over two millennia after their deaths.

Read more in the original annotated, illustrated translation of Cicero’s On Moral Ends:

2 thoughts on “On The Death Of Seneca”