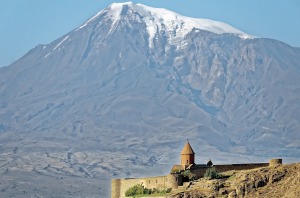 There is an allegorical short story written by H.G. Wells entitled The Apple.  Several men in a “third-class carriage on a Sussex railway,” each absorbed in his own thoughts, begin to talk among themselves.  One announces that he is in possession of what he calls an “apple from the Tree of Knowledge,” and that he “must get rid of it.”

The apple, says the man, never decays; he has held it now for three months, and it is just as shiny and pristine as they day he first acquired it.  The listeners are dubious.  They ask how he knows it is an apple from the actual Tree of Knowledge from the Garden of Eden, and he weaves for them a fascinating tale.  The man says he bought the apple from an Armenian, for drink of water and a piece of bread.  The mountains of the Near East, where Noah’s Ark is supposedly “buried in the glaciers of Mount Ararat,” hold many secrets—and it happened that this poor Armenian stumbled on the Tree of Knowledge by pure accident.

He was fleeing an attack by Kurdish raiders, and found himself lost among the desolate mountain crags.  After wandering for several days, he descended into a hidden little valley nestled amid the mountain snows.  It turned out to be a strange and enchanting place.  As he stumbled among the trees and bushes, a ripe fruit found its way into his hand.  He then fainted, but when he regained consciousness, he found himself back in his own village, still holding the golden fruit.  There are local legends, the man says, about the Garden of Eden.  He tells his astonished companions that “those thickets of dwarfed trees growing about the garden sprang from the apple that Adam carried in his hand when he and Eve were driven forth…and there they grow, in that desolate valley, girdled round with the everlasting snows, and there the fiery swords keep ward against the Judgment Day.”

And it is a curious sort of fruit, when the men examine it.  It has a glowing yellow color, oddly luminous.  Someone asks the man why he didn’t eat the apple.  For what difference would it make?  He would acquire supreme knowledge if he did so.  Man had already fallen, he reasoned; what harm could come from eating it now?  For we inherited the sins of Adam and Eve, not their knowledge.  The man says that eating the apple was originally his plan.  But over time, he began to experience doubts, vague ones at first, which grew into apprehension, and finally terror.  To know all might not be a good thing:  it might in fact be a crushing, murderous burden.  And yet what should he do with the apple?  The man senses that throwing it away was somehow not right.  “Once one has it, one is bound,” he tells his listeners.

At this point, the carriage stops, and a passenger named Hinchcliff gets out.  The dark-eyed stranger, the possessor of the apple, extends his arm and gives it to him.  Hinchcliff, apparently caught by surprise, accepts it and puts it into his pocket.  As he walks out of the station, he is aware of the awkward bulge of the apple in his pocket.  He is conscious of passers-by noticing the spherical lump that projects from his clothing.  He tries to put it in his hat, but it is too large; he contemplates eating it, but rejects that idea, not wanting to walk “into the town sucking a juicy fruit.”  He sees two girls approaching him, and is afraid to be seen as a fool for carrying a luminous yellow fruit.  So he tosses the apple over a stone wall into an orchard along the side of the road.  And it was gone.  That night Hinchcliff has a dream about the hidden valley in the mountains where the apple had been found; and the dream is so clear and detailed that he now has no doubt that the apple really was a fruit of the Tree of Knowledge.  He regrets having abandoned it.  He returns to the orchard later, but the apple is gone.

This is the end of the tale.  What are we to make of it?  It is, of course, laden with symbolism.  But symbolism of what?  We must begin with the apple.  It seems to be connected with two things:  knowledge and love.  Consider this forgotten tale of the Byzantine empress Eudocia.  It appears in the Chronographia of the ecclesiastical historian John Malalas (c. 491—578), and describes an event that occurred in the reign of emperor Theodosius II (c. 401—450).  The wife of Theodosius was a beautiful and vigorous woman named Aelia Eudocia.  She was a learned and confident empress, accustomed to expressing her intentions directly; she had a natural zest for life and all that life might offer.  Like the learned Hypatia of Alexandria, who had also combined feminine charms with regal bearing, the empress attracted both intense admiration and sullen resentment from those who came into contact with her.

One day the emperor Theodosius was on his way to visit a church during the Feast of the Epiphany with his retinue.  A citizen who approached him gave the emperor as a gift a Phrygian apple, one that was extremely large.  The emperor’s entourage were impressed by this oddity.  The citizen was awarded with a sum of money (150 nomismata) for his trouble.  Theodosius sent the apple to the empress Eudocia.  Eudocia, in turn, sent the large apple to her favorite, a man named Paulinus, who also happened to be the emperor’s magister officiorum (master of offices), which was a top government rank.

We should note here that in old Greek culture, the gift of an apple from a woman to a man was a symbol of love.  The woman who bestowed such a gift on a man did so to communicate special feeling.  Paulinus, we should also mention, was a very handsome man and longstanding friend of Theodosius from childhood.  Paulinus did not know that the apple he received from Eudocia had originally come from Theodosius.  He therefore gave it to the emperor, who recognized it immediately.  This act sealed his fate.

Theodosius concealed the apple and approached Eudocia.  He then began to question her about the apple.  “Where is the apple?  What has happened to it?” he asked her.  “I ate it,” was Eudocia’s reply.  He asked her to swear to the truth of her statement, to swear that she did not give it to any man, and she swore that it was true.  The emperor then produced the hidden apple, proving that she had lied.  Thus were the seeds of suspicion sown in his mind about the nature of the relationship between Eudocia and his friend and minister Paulinus.  Rumors of their liaison swirled around the court.  Eventually, he had Paulinus executed in A.D. 444.  Everyone knew that Paulinus had been put to death on account of Eudocia.  In grief and mourning, she left Constantinople to pray and work in Jerusalem.  She retained her rights as empress, but focused her energies on social work.  Her work was so successful and effective in Jerusalem that the jealousies of Theodosius were once again aroused.  He sent one of his men, named Saturninus, to probe into the activities of Eudocia in Jerusalem.  Saturninus would eventually have two close confidants of the empress—priests named Severus and John—slain.  But Eudocia took her revenge on Saturninus by causing him to be assassinated soon after this.  She spent the remainder of her life in charitable and religious work in the Jerusalem area.  Theodosius made no further effort to monitor her.

And so we see the apple connected to love and knowledge, but in a highly unfavorable way.  It is as if any knowledge or love that the apple can offer is negated by the danger that attends it.  Consider also the fable of Hercules and the apple of Athena; we find it in Aesop.  One day, Hercules is proceeding along a pathway in the mountains when he spots an apple lying on the ground.  Irritated at its presence, he decides to smash it with his club; and when he tries to do so, the apple doubles in size.  Shocked, he swings his club at it again, this time determined to crush it completely.  But he has misjudged the situation, for the apple now swells to such size that it blocks the mountain pass through which he intended to travel.  He does not quite know how to deal with this situation; he is in the habit of solving problems by bludgeoning them.  Suddenly, the goddess Athena appears before him, amused at his predicament.  “It is no use to go on like this, comrade,” she counsels him.  “What you are experiencing is what it is like to become embroiled in conflict with others.  If you leave matters alone, you can proceed with your life as before; but if you decide to engage them, they explode in front of you, hampering your progress.”  This is what the goddess says to Hercules. 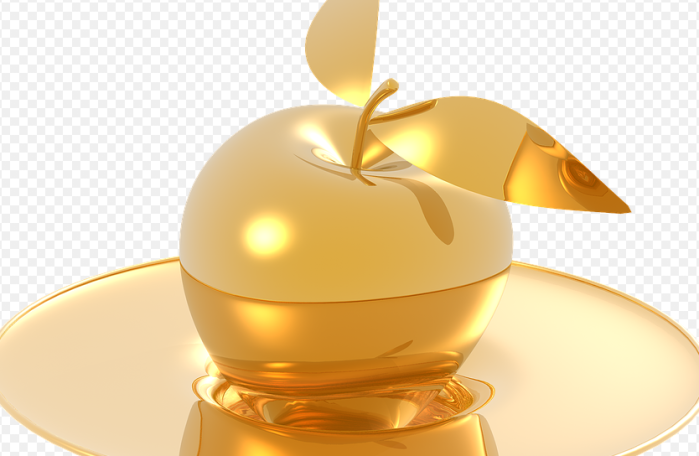 There are some who say that it is better not to know certain things.  They say that knowledge and love can be curses that bring more anguish than benefit.  But this view does not sit well with me; it seems to me a timid retreat from the responsibilities and enjoyments of life, an abdication of one’s life purposes.  It is better to say this:  we should know the limits of knowledge, we should know the limits of love.  That is, we must know where the boundaries of these things are; we must be careful not to push things too far.

I say Mr. Hinchcliff erred in tossing the golden apple away.  He was right to fear it:  for fear is the beginning of true knowledge, and the beginning of the cognition of boundaries.  There are limits to everything in life:  especially knowledge, and especially love.  It was right that he should be in fear of the apple.  It was good that he was in fear of it:  for this is the origin of divine wisdom.  And yet this fear must be borne.  This cargo of forbidden knowledge must be carried as a burden on our backs, never to be tasted:  for this is the origin of the virtues of discipline and humility.  We cannot unburden ourselves of this obligation.  We cannot unburden ourselves of this duty by thrusting it on others.  We can never do this.  It is a freight that must be carried by each man for the duration of his life:  carried, and never consumed.  Every man is fated to carry his own unrealized burdens of knowledge and love.  And every man must know there are limits to all things.  It cannot be otherwise.  Nor should it be.

I would have brought the apple home, set it on the mantlepiece, and let it glow.  It would never be tasted, and yet never abandoned or given away.  It would remain there in perpetuity, as both inspiration and warning.

One thought on “The Apple”