.  It constructs a comprehensive profile of the man, his work, and his thought process.  What many readers will want to know is:  how did he manage to think so creatively?  What can I learn from the life and work of this sort of great man?  I share Plutarch’s consuming interest in wanting to know why great men do the things they do.

Great scientists have figured prominently in these pages before.  We have summarized, for example, the lives of Archimedes, Ibn Khaldun, and Lagrange, and my books have discussed the careers of Ibn Rushd (Averroes), Leibnitz, and Max Planck.  Obviously not everyone can be an Einstein.  But that does not mean that we cannot learn from his methods.  Great men are like pathways:  they cut through the tangled underbrush of inherited tradition and preconceptions, and carve out new lines of inquiry.  By any standard, Einstein was one of the most influential scientists who ever lived, and certainly needs no praise from us.

What is important to remember was that he was a creative thinker, as new and original as can be imagined.  Let us, then, see what he may teach us.  These were the features of his thinking that enabled him to unlock his inner potential as a creative thinker.

Einstein was from his youth a consummate outsider.  He never was bothered by not “fitting in” with the rest of the crowd.  Peer pressure was something that he was almost entirely immune from.  This fact, less the result of courage than of psychological make-up, enabled him to examine problems that had long been considered “settled” in physics, such as the nature of light and gravity.

He had an intuitive feel for spatial relationships and the graphic representation of physical problems.  Many physicists tend to think in terms of equations and mathematical formulae; not so Einstein.  He first examined problems from a “visual image” perspective, and then seemed to search for the mathematics that would best describe what he concluded.

Not many people can do this; Einstein elevated the “thought experiment” from an idle parlor-game fantasy into a vehicle for studying the most complex physical problems.  It is clear that Archimedes possessed this same gift.  We may conclude from this, then, that the ability to see problems in a graphic, three-dimensional way is the mark of a creative mind.

He read philosophy seriously.  Many so-called “hard scientists” seem to treat disciplines like philosophy with barely disguised contempt.  Philosophy, they believe, has little to do with the problems of theoretical physics, and less to do with solving them.

Einstein never believed this.  He read Immanuel Kant while in his early teens, and re-read him frequently throughout his life, along with other philosophers.  It seems clear that this kind of intellectual curiosity was what kept him active and vigorous.  Even if philosophy had no direct connection with physics, the very act of studying it activated parts of his brain in subtle ways, driving his creative muse forward. 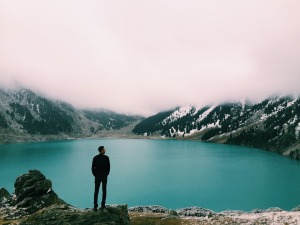 In the same vein, Einstein thought it important to continue his musical studies throughout his life.   He learned to play the violin at an early age, and never lost this skill.  Practicing a totally different recreational discipline from science stimulated different parts of his brain in the same way that studying philosophy did.  I have noticed this same thing from my experience with painting.

When painting a picture, the mind becomes absorbed in a completely different way of thinking than it normally is occupied with.  This fact, somehow, keeps us fresh, alert, and open to new ways of looking at problems.  The mind of like the jaws of a bulldog; it must find something to seize on and gnaw at.  And if we give it a new type of bone to chew on, it finds itself much relaxed and refreshed.

He was able to disconnect himself completely from his environment and focus on his work.  Stories are told of Einstein being totally oblivious to the sounds of screaming infants or idle chatter, and focusing single-mindedly on his work.  He was not the absent-minded bookworm that popular mythology has made him out to be, but he was able disregard external “noise” to a surprising degree in his life.

These special qualities, of course, were not without their drawbacks.  They enabled Einstein to scale the heights of creative achievement that few have known, but they came with a cost.

For one thing, he seems to have been almost completely lacking in a normal man’s qualities of empathy for others.  Examples of this abound in his life.  During the First World War (1914-1918), when Europe was in flames all around him, he was strangely silent about the great tragedy that was consuming the nation of his birth as well as his fellow European civilians.  This was a period of great professional productivity for him; the theory of general relativity emerged during this period.

Yet there is not one public or private utterance from him expressing any regret of compassion for the millions of men dying in those years.  I found this aloofness from the world of human affairs to be, in the end, quite troubling.  Both Isaac Newton and Liebnitz, for example, at least tried to involve themselves in the public life of their era, if only out of a sense of obligation to their fellows.

It is also clear that his primary motivation for leaving Germany for Switzerland in his youth was a desire to avoid registration for military conscription.  In retrospect this was a fortuitous decision, as he might eventually have become just another of the Kaiser’s war casualties.  Nevertheless this was not known at the time, and there is something vaguely contemptuous in this sort of draft-dodging.

There was about him a certain impish, rebellious quality that made him want to deliberately provoke authority.  This character trait hurt him as a student.  He was (contrary to popular belief) a very good student.  While studying at the Polytechnic Institute in Zurich, Switzerland, though, he seemed unable to hide his contempt for instructors that grated on him, and this fact hurt him after graduation.  When it came time to search for jobs and he needed recommendations, he found himself with much less help from the faculty than others had.

Without doubt he was emotionally detached from others.  His first wife was a brooding and possibly depressive Serbian woman named Mileva Maric.  While their student romance was at first very passionate, the two grew apart slowly as Einstein’s star rose in the scientific world.  Maric was a trained physicist herself, and apparently resented her husband’s celebrity.

There are also darker hints that she may have been deeply wounded by his conduct after she conceived a child with him before their marriage.  This daughter, Liserl, was either given up for adoption or died of some ailment as an infant.  We do not know if Einstein forced her to give the child up for adoption.  In any case, he never spoke of the matter or acknowledged it in any way.

The truth may never be known, since both Einstein and Maric destroyed most of the correspondence relating to the incident.  But it is clear that he was emotionally detached in matters of this sort, and this must have grated on her over time.  He also had another son who needed to be institutionalized for schizophrenia, and this fact may have been an additional factor that drove the couple apart.

These, then, are the ways in which Einstein’s thinking differed from that of his peers and contemporaries.  Perhaps the most that can be said is that the very qualities which gave rise to his strengths, also generated his faults.  In this he was not unlike most other great men; for every virtue, and every creative impulse, produces some corresponding vice.

Great men seem to need their vices as much as their virtues, just as the beating heart requires both systole and diastole to circulate blood through the body.