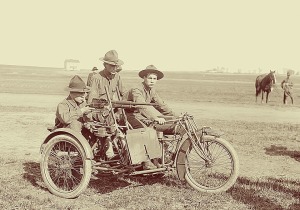 Today we take for granted the fact that infantry units are equipped with all sorts of portable firepower.  Squads carrying light machine-guns are accepted as natural and part of the battlefield equation.  But it was not always so.

At he outset of the First World War in 1914, none of the belligerents appreciated the need for infantry units to be able to carry machine-guns into action at the squad or platoon level.  Machine-guns existed, of course, like the British Vickers and the German Maschinengewehr 08, but these were bulky, heavy weapons designed more for fixed-position use than for portability.  The Vickers gun, for example, weighed about 40 pounds, and this was without its tripod.  Heavy machine-guns were used in some ways like artillery pieces:  they were manned by dedicated crews, and were set up with mathematical precision to cover interlocking fields of fire.

So in the early battles of World War I, there was no practical way for the poor infantry to make advances while carrying firepower with it.  Rifles alone could not do the job; they did not provide a sufficient volume of fire.  There was as yet no way to keep an enemy machine-gunner under pressure.  “Calls for fire” did not exist at that time:  radios were not used, which meant that the infantry was on its own.  It has been estimated that the heavy machine-guns of World War I accounted for most of the horrendous casualties simply because there was no way to neutralize them reliably.

But the idea of a portable light machine-gun was not slow in coming.  The British Lewis gun had been around for a while, and it came to be appreciated that the gun (despite its faults) was at least portable and could be carried into battle by attacking infantry.  Originally produced in Belgium (after having been designed by the American Samuel Maclean), the Lewis gun was a heavy, bulky, air-cooled weapon that was prone to jamming.

The revolving ammunition tray which it used as a feed could collect grit and dirt with ease, and it was not especially accurate.  But it worked well enough, and it could be churned out in great numbers.  It could even used in an anti-aircraft role.

The British gradually began to learn how to employ the Lewis gun in two-man teams in support of small unit operations.  But the Germans were not idle, either.  They immediately recognized the need for a light machine-gun of some sort, and in response developed the MG 08/15.  It may be the first, or one of the first, truly portable light machine guns.

The Germans did not just stop there, of course.  With their new light machine-gun, they also combined “storm tactics,” where by enemy strong points would simply be bypassed in favor of attacking softer positions in the enemy’s rear areas.  Had they been able to implement these new tactics with sufficient manpower and concentration, it is possible that the outcome of the war in 1918 might have been very different.

In any case, by the end of the war, the light machine-gun had come fully into its own, and has been part of the infantry equation ever since.