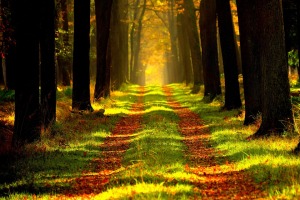 François-René de Chateaubriand (1768-1848) was a French writer, diplomat and historian famous for his posthumous autobiography Memoirs from Beyond the Tomb.  The book is appealing for its admixture of blunt honesty and romantic reflection that capture the spirit of the times in a way that enables the reader to feel he is a participant himself.

Becoming disillusioned with the excesses of the French Revolution of 1789, he set out for America.  No compelling reason is given for this save simple curiosity and a desire to search for the North-West Passage:  men were adventurous in those days in ways that we today are not.  Here he describes his mood just before setting out on his search for the Great Mystery:

I was setting out with nothing but my youth and my illusions; I was leaving a world whose dust I had trod, and whose stars I had counted, for a world whose soil and sky was unknown to me.  What was to become of me if I attained the object of my voyage?  If I had roamed the polar shores the years of discord which have crushed so many generations with so much din would have fallen silently over my head; society would have changed its appearance in my absence…Who can tell whether I should have recrossed the Atlantic, or whether I should have settled down in the solitary wastes explored and discovered at my risk and peril, like a conqueror in the midst of his conquests?

Arriving in America, and armed with nothing more than a letter of recommendation, he set out to meet General George Washington in Philadelphia.  This is not as incredible as it may seem to us today.  In those days it was possible for unknowns to be granted access to men of high rank; it was a civilized age, and thoughts of personal security did not obsess the minds of public figures then as they do today. Chateaubriand was simply able to walk up to the president’s door and present himself as a man trying to discover the North-West Passage.  It sounds incredible, but it is true.  It was a different era.  Here he describes his meeting with America’s inscrutable first president:

When I arrived in Philadelphia, General Washington was not there: I was obliged to wait for him for about a week…

A little house, which looked like the other houses nearby, was the palace of the President of the United States:  there were no sentries, not even any footmen.  I knocked, and a young maidservant opened the door.  I asked her if the General was at home; she replied that he was.  I said that I had a letter for him.  The maid asked me my name, which is difficult to pronounce in English and which she could not remember.  She then said quietly:  “Walk in, sir,” and led the way along one of those narrow corridors which serve as entrance-halls in English houses:  she showed me into a parlor where she asked me to wait for the General…

A few minutes later the General came in:  tall in stature, and calm and cold rather than noble in bearing, he resembled his portraits.  I handed him my letter in silence; he opened it, and his eyes went straight to the signature, which he read aloud, exclaiming, “Colonel Armand!”  This was the name by which he knew the Marquis de la Rouerie and by which the latter had signed himself.

We sat down.  I explained to him as best I could the purpose of my journey.  He answered in monosyllables in English and French, and listened to me with a sort of astonishment.  I noticed this, and said to him with some spirit:  “But it is not as difficult to discover the North-West Passage as it is to create a new nation, as you have done.”

“Well, well, young man!” he exclaimed, giving me his hand.  He invited me to dinner the next day, and we parted.  I took good care to keep the appointment.  There were only five or six guests…I left my host at ten o’clock in the evening, and never saw him again; he went away the next day, and I continued my journey.

In such remarkable ways do men sometimes cross paths with notable figures of history.  Those who may find it hard to believe that a regular person could meet a president like one today would meet a town selectman should remember that before the Second World War there was–by today’s standards–very little security at the White House in Washington.

I remember reading a story of one couple who had motored from California to Washington as tourists.  To see the White House, they simply drove their car up the White House’s driveway.  They were soon asked to move the vehicle, however, by a government employee; he told them that the president wanted to go out for a drive and “their car was blocking the driveway.”  When we hear stories like this, we realize how much society has changed.