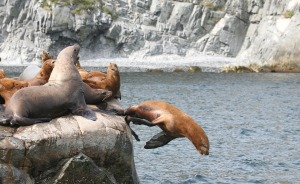 In these pages we have given the great explorers of Britain, Germany, Australia, the United States, and some other nations their due.  We now discuss the life and career of Russia’s most accomplished nineteenth century explorer and adventurer, the Baron Ivan Fyodorovich Kruzenshtern (Иван Фёдорович Крузенштерн).  Like many of the names celebrated here, his is virtually unknown in the West today, a fact that may intimate just how far we have departed from the adventurous, daring spirit of those who came before us.

He was born in Estonia in 1770 as Adam Johann Ritter von Krusenstern; as his name suggests, his ancestors had originally come from Sweden.  A military career in the Russian navy turned out to be his calling; perhaps a proximity to the ocean imparts a dosage of salt water in every man’s veins.  Russia had explorers before, of course, but most of them (e.g., Behring, Tchirikoff, Spangberg, Laxman, Krenitzin) had been focused on explorations near the waters of the Russian Empire’s vast domains.  Perhaps the terrestrial immensity of Russia itself kept its people so preoccupied that they had no energy left over for the kind of international ventures that the Western Europeans undertook.  In any case, Kruzenstern was the first Russian to lead a scientific expedition that spanned the globe.

When one wishes to learn, one seeks out the best.  Kruzenstern served in the British Navy in 1793 and remained there, learning what he could, for six years.  His experience in the Far East, especially in China and the Aleutian Islands, convinced him that geographical knowledge of the area was woefully underdeveloped; Czar Alexander I agreed with him, and in 1802 commissioned him to explore the little-known coast of what is now Alaska.  His two ships, named the Nadiejeda and the Neva, left the port of Cronstadt (near St. Petersburg) in August 1803.  They visited the Canary Islands and Brazil, then passed through the Straits of Magellan and pushed into the Pacific.

In the South Seas his powers of observation became more finely honed.  Here he describes some warriors and weapons of the Marquesas:

The members of these clubs are distinguished by different tattooed marks upon their bodies; those of the king’s club, consisting of twenty-six members, have a square one on their breasts about six inches long and four wide…

In their intercourse with us they always showed the best possible disposition, and in bartering an extraordinary degree of honesty, always delivering their cocoa-nuts before they received the piece of iron that was to be paid for them. At all times they appeared ready to assist in cutting wood and filling water; and the help they afforded us in the performance of these laborious tasks was by no means trifling. Theft, the crime so common to all the islanders of this ocean, we very seldom met with among them; they always appeared cheerful and happy, and the greatest good humor was depicted in their countenances. . . .

The two Europeans whom we found here, and who had both resided with them several years, agreed in their assertions that the natives of Nukahiva were a cruel, intractable people, and, without even the exceptions of the female sex, very much addicted to cannibalism; that the appearance of content and good-humor, with which they had so much deceived us, was not their true character; and that nothing but the fear of punishment and the hopes of reward, deterred them from giving a loose to their savage passions.

These Europeans described, as eye-witnesses, the barbarous scenes that are acted, particularly in times of war—the desperate rage with which they fall upon their victims, immediately tear off their head, and sip their blood out of the skull, with the most disgusting readiness, completing in this manner their horrible repast. For a long time I would not give credit to these accounts, considering them as exaggerated; but they rest upon the authority of two different persons, who had not only been witnesses for several years to these atrocities, but had also borne a share in them: of two persons who lived in a state of mortal enmity, and took particular pains by their mutual recriminations to obtain with us credit for themselves, but yet on this point never contradicted each other…

Their weapons are invariably adorned with human hair, and human bones are used as ornaments in almost all their household furniture; they also often gave us to understand by pantomimic gestures that human flesh was regarded by them as a delicacy.

We may allow for some hyperbole in the above passage.  Kruzenstern’s biographer Jules Verne, quoting this passage in 1881, regarded his description as somewhat exaggerated, as perhaps it was.  Man and his cultures are products of geography, climate, and other circumstances; and we cannot be too quick to deliver verdicts on the social customs that result from these influences.  Verne gave a fair assessment when he noted, “We must not, therefore, blame these representatives of humanity for not having risen higher. They have never been a nation. Scattered as their homes are on the wide ocean, and divided as they are into small tribes, without agricultural or mineral resources, without connexions, and with a climate which makes them strangers to want, they could but remain stationary or cultivate none but the most rudimentary arts and industries. Yet in spite of all this, how often have their instruments, their canoes, and their nets, excited the admiration of travelers.”

Kruzenstern proceeded across the Pacific and explored parts of Kamchatka and Japan.  Regarding Satsuma, he noted:

The whole country consists of high pointed hills, at one time appearing in the form of pyramids, at others of a globular or conical form, and seeming as it were under the protection of some neighboring mountain, such as Peak Homer, or another lying north-by-west of it, and even a third farther inland. Liberal as nature has been in the adornment of these parts, the industry of the Japanese seems not a little to have contributed to their beauty ; for nothing indeed can equal the extraordinary degree of cultivation everywhere apparent. That all the valleys upon this coast should be most care fully cultivated would not so much have surprised us, as in the countries of Europe, where agriculture is not despised, it is seldom that any piece of land is left neglected.

But his visit to Japan was not entirely pleasant.  Expecting to be accorded the same privileges as the Dutch, who were already there, he found himself isolated and shunned when he put the Nadiejeda ashore at Nagasaki.  Japan at this time practiced a strict policy of isolation, and foreigners were not welcome.  He then surveyed the western coast of Japan and edged toward the Korean peninsula.  At Sakhalin, he recorded observations on the Ainu people, an indigenous people of Japan:

The Ainos are rather below the middle stature, being at the most five feet two or four inches high, of a dark, nearly black complexion, with a thick bushy beard, black rough hair, hanging straight down; and excepting in the heard they have the appearance of the Kamtschadales, only that their countenance is much more regular. The women are…dark, their coal-black hair combed over their faces, blue painted lips, and tattooed hands, added to no remarkable cleanliness in their clothing, do not give them any great pretensions to loveliness. . . . 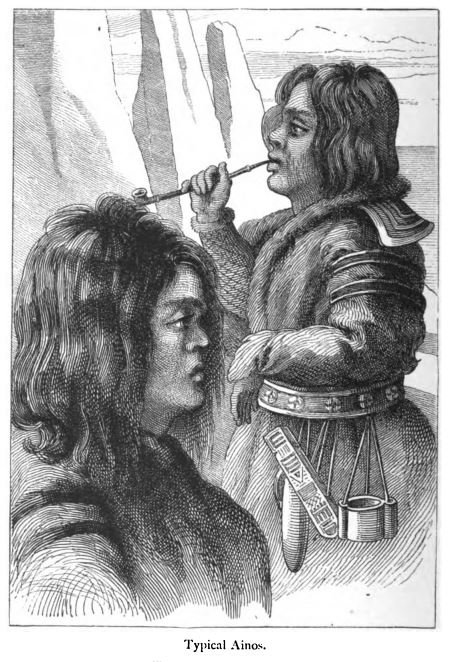 How ever, I must do them the justice to say, that they are modest in the highest degree, and in this point form the completest contrast with the women of Nukahiva and of Otaheite [Tahiti]…The characteristic quality of an Aino is goodness of heart, which is expressed in the strongest manner in his countenance; and so far as we were enabled to observe their actions, they fully answered this expression.

In October 1805, Kruzenstern headed towards Europe.  He visited Macao in China on the way there, then finally arrived back at Cronstadt in August 1806.  His written record of his explorations was translated into English several years later.  He was one of the first Westerners to provide detailed descriptions of the little-known regions near Japan and Kamchatka; before him, many navigators had to rely on the uncertain accounts of shipwrecked sailors.

He was elected to the Russian Academy of Sciences, made an admiral in 1841, and then died five years later.  One of his hopes was that Russia would follow-up his expedition with others like it; this, unfortunately, did not happen, for variety of reasons.  Russia in the mid-nineteenth century was grappling with social change and political instability, and not enough attention was paid to Kruzenstern’s warnings that the Russian Far East would be an important region in the decades to come.  Perhaps he was too far ahead of his time.  But he was the first Russian to circle the globe, and he had dared to push the outer limits of geographic knowledge.

Read more about exploration, adventure, and bravery in Thirty-Seven: