Skip to content
HomeA Jaguar Hunt On The Taquary, And The Precepts Of Pythagoras

Every man is a jumble of paradoxes.  The same man can harbor sentiments of the noblest, most generous, and elevated type; and at the same time, he can retain the capability to deliver lethal blows for necessity or sport.  It is almost as if the altruist or artist needs a bit of tempering with a dash of Tamerlane.  Consider Theodore Roosevelt, the president generally considered the primary voice of conservationism in the twentieth century.

From an early age, he showed a great sensitivity to the natural world and biology–so much so that he seriously considered becoming a scientist.  One of his first books was on the bird species that resided near his home in the state of New York.  During his life he always remained an astute observer of animal behavior.  Consider this passage, taken from his Through the Brazilian Wilderness, his account of the famed exploration of the Rio da Duvida:

These common Argentine birds, most of them of the open country, and all of them with a strikingly advertising coloration, are interesting because of their beauty and their habits.  They are also interesting because they offer such illuminating examples of the truth that many of the most common and successful birds not merely lack a concealing coloration, but possess a coloration which is in the highest degree revealing…Evidently in their cases neither the coloration nor any habit of concealment based on the coloration is a survival factor, and this although they live in a land teeming with beard-eating hawks.

How do we account for the fact that the author of this passage, which reveals such a sympathetic appreciation of nature’s mysterious ways, was the same man who wrote this:

Caymans were becoming more plentiful…They are often dangerous to domestic animals, and are always destructive to fish, and it is good to shoot them.  I killed half a dozen, and missed nearly as many more–a throbbing boat does not improve one’s aim.

The answer is quite simple, really.  Man is a complicated being, full of paradoxes.  He is not so elevated from nature, or his primeval ancestors, as to be exempt from the same laws that governed them.  He needs to satisfy his blood-lust every now and then.  He craves the thrill of the pursuit, the closing in on the prey, and the feel of delivering that final blow.  You cannot blame him for this.  You cannot condemn him for it, either.  For no man is a pure altruist; even the most altruistic harbor, in their recesses of their hearts, carefully-concealed aggressive impulses.  They are simply sublimated into socially-accepted forms, or re-directed into other manifestations. 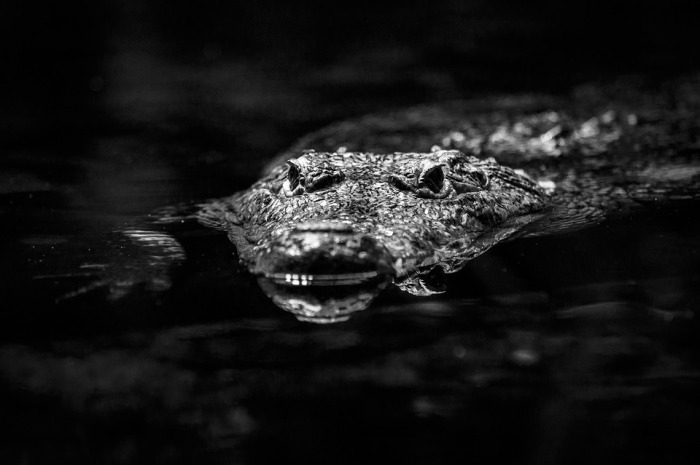 This is why America’s greatest conservation president saw nothing paradoxical about titling one of the chapters of his book “A Jaguar Hunt on the Taquary.”  He had no problem with this at all, because Teddy was a killer, in his heart of hearts.  He was a refined, erudite, brave, and civilized man, of course, a man I admire deeply; but he also had a streak of the barbarian in him.  Presumably he would have been pleased at hearing this observation.  Teddy had no problem gunning down one of the most beautiful animals of South America, the jaguar, and writing about it with relish:

At last, on the edge of a patch of jungle, in wet ground, we came on fresh jaguar tracks.  Both the jaguar hounds challenged the sign…The dogs had entered a patch of tall tree jungle, and as we cantered up through the marsh we saw the jaguar high among the forked limbs of a taruman tree.  It was a beautiful picture–the spotted coat of the big, lithe, formidable cat fairly shone as it snarled defiance at the pack below.

I did not trust the pack; the dogs were not stanch, and if the jaguar came down and started I feared we might lose it.  So I fired at once, from a distance of seventy yards.  I was using my favorite rifle, the little Springfield with which I have killed most kinds of African game, from the lion and elephant down…At the shot the jaguar fell like a sack of sand through the branches, and although it staggered to its feet it went but a score of yards before it sank down…

It is remarkable, really, when you think about it:  that is, how these two contradictory impulses–preservation and destruction–can co-exist in a great man at the same time.  Or maybe we are wrong to say “contradictory impulses.”  Perhaps the truth is that the two impulses spring from the same impulse in man’s heart:  the reverence and awe that he feels for the natural world.  He wants at the same time to preserve nature, and to slay it, in order to keep it for himself.  He covets, and has this need to possess.  This is how we should reconcile these apparently conflicting impulses.  We cannot take the good Theodore without the “bad” Theodore:  they are part and parcel of the same man.  He would never have been able to achieve what he achieved without his tincture of barbarism.

The wisest sages of old were aware of this.  They saw that one of their primary duties would be to train men to keep these barbarous impulses under the surface.  They did not wish to slay the beast within, only to keep it well-restrained.  Pythagoras (c. 582 B.C.–500 B.C.) was one of the first, and most influential, of the early Greek philosophers.  The school he founded in southern Italy (a Greek colony called then Magna Graecia) bore many similarities to an organized religion.

According to the biographer Diogenes Laertius (Lives of the Philosophers VIII.10), Pythagoras divided a man’s life into four “quarters” as follows:  twenty years a boy; twenty years a youth; twenty years a young man; and twenty years an old man.  He said these four quarters corresponded with the four season of nature (spring, summer, fall, and winter).  Youth, he knew, burned bright and hot; but old age brought on a calming, cooling effect, an inevitable slowing-down of the bodily machine.

Don’t stir the fire with a knife.

Don’t step over the beam of a balance.

Don’t sit down on your bushel.

Don’t help a man off with a load, but help him on.

Always roll your bed-clothes up.

Don’t put God’s image on the circle of a ring.

Don’t leave the pan’s imprint on the ashes.

Don’t wipe up a mess with a torch.

Don’t commit a nuisance towards the sun.

Don’t have swallows under your own roof.

Don’t urinate on or stand on your own hair or nail clippings.

Turn the sharp blade away.

When you go abroad, don’t turn around at the frontier.

Some of these are obscure, and Diogenes knows this.  Wisdom should require a little effort to appreciate, and Pythagoras knew this.  But he does venture to explain some of these admonitions.  “Don’t stir the fire with a knife” meant, do not antagonize the powerful against you.  “Don’t step over the beam of a balance” meant not to overstep the rules of fairness, equity, or justice.  “Don’t sit down on your bushel” meant to take care of your future needs (a bushel symbolized a grain ration).  “Don’t eat your heart” meant not to spend your life fretting about things you cannot control.  “Don’t turn around at the frontier when you go abroad” meant not to become too attached to the things of this life, as death may claim you at any time.

Frustratingly, Diogenes does not explain all of Pythagoras’s precepts.  He says only, “The explanations of the rest are similar, and would take too long to go through.”  We may, then, venture our own explanations for the remainder.  “Don’t put God’s image in the circle of a ring” perhaps meant not to profane sacred things; “Don’t commit a nuisance toward the sun” may have meant the same thing, since the Pythagoreans held the sun to be sacred; “Don’t urinate on or stand on your own hair and nail clippings” may have been an earthy admonition not to bring messes or problems into one’s life.  The remainder are a bit more straightforward.

Physical and mental equilibrium was  important to Pythagoras.  This should come as no surprise, seeing how obsessed he was about numbers and ratios.  The only way a man could retain his internal balance–that is, to reconcile those conflicting, warring impulses within himself–was to try to live a disciplined, ordered, unadorned life.  Man possessed intelligence, reason, and passion, he taught.  Passion resided in the heart, while the other two were contained in the brain.  The proper balancing of these elements were what kept a man on an even keel.  For Pythagoras, passion was not something to be ashamed of; it was a natural condition of the human animal, and should be channeled to positive uses.  Sensitive altruism and savagery were, he knew, two sides of the same coin.

Pythagoras understood the need for rules, guidelines, and admonitions.  Read his precepts again:  they are all suggestions about behavior.  He knew very well what lurked underneath man’s placid exterior, and spent his life trying to discipline and tame these primeval impulses.  But he accepted man as he was, and never tried to pile guilt or shame on him for being the amiable barbarian that he was.  He knew that those base impulses in man could be the source of just as much good as evil.  Those impulses should never be abolished or amputated, only controlled, harnessed, and restrained for our productive use.  Masculine virtue, Pythagoras knew, needs a bit of blood-lust, a dash of savagery, to give it potency and life.

I think he would have had no problem understanding a man like Theodore Roosevelt.

Read On Duties today, which is now available in audio book: