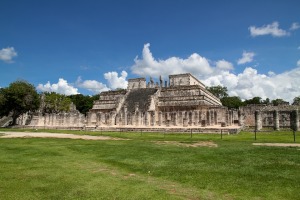 There must be many times when the participants in great historical events can scarcely believe their good fortune in being present to witness the momentous events in question.  Chance has its role in history; and whether Fortune or virtue plays the deciding role in human events is a question that we must leave to the philosophers.  Cicero tells us (On Moral Ends V.5) that Theophrastus’s treatise On the Happy Life placed too much weight on the role of Fortune, and not enough emphasis on virtue.

Scowling at his predecessor’s opinion, Cicero cuts him off at the knees:

Now if Theophrastus’s opinion is true, then wisdom alone is no assurance of a happy life.  If I may speak frankly, this theory to me is too enfeebling and mushy-headed to be worthy of virtue’s intrinsic power and importance. [V.5].

On balance we must agree with Cicero.  Even if we cannot tell where the hand of Fortune leaves off and human effort begins, we should always make use of our own powers to control that which we can control.  Not to do so would be to surrender our responsibilities to an enervating fatalism.  But enough of these matters.

One of the most fascinating witnesses to great events was the conquistador Bernal Diaz.  He was a foot-soldier who accompanied Hernando Cortez during his fabled expedition into Mexico.  Many decades after the conquest of the Aztec empire, Diaz undertook to write his own fascinating personal account of the expedition.  He was an old man by this time, certainly in his eighties, and feared he would not be up to the task; but he was powerfully motivated by his desire to make sure that the real story of the expedition was committed to paper.  And it is indeed a thrilling account.  We are carried along by the earnestness and sincerity of his prose, and by his unshakeable conviction in the righteousness of his cause.

And he has an eye for the minutest detail.  Shortly after Cortez and his party made the Aztec emperor Montezuma their “honored guest” (i.e., their captive) in his own capital city, Diaz had a chance to observe the emperor as he went about his daily affairs.  Montezuma is in some ways a strange and elusive figure; his odd alternations between aggressiveness and passivity leave room for doubt in the historian’s mind as to what he was truly thinking at any given time.  We can only observe, and speculate. 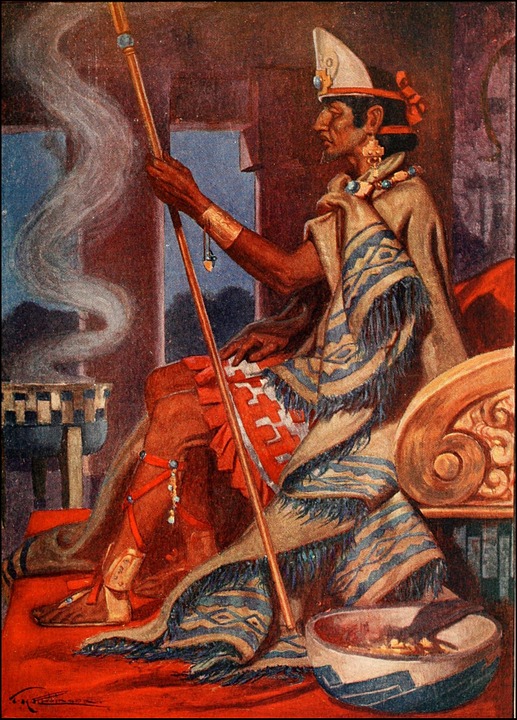 Here Diaz describes one of the emperor’s lavish banquets, a scene that would have made Petronius’s Cena Tremalchio look like an afternoon snack:

For each meal his servants prepared him more than thirty dishes cooked in their native style, which they put over small earthenware braziers to prevent them from getting cold.  They cooked more than three hundred plates of the food the great Montezuma was going to eat, and more than a thousand more for the guards…[E]very day they cooked fowls, turkeys, pheasants, local partridges, quail, tame and wild duck, venison, wild boar, marsh birds, pigeons, hares and rabbits, also many other kinds of birds and beast native to their country, so numerous that I cannot quickly name them all…

Let us now turn to the way his meals were served, which was like this.  If it was cold, they built a large fire of live coals made by burning the bark of a tree which gave off no smoke.  The small of the bark from which thy made these coals was very sweet.  In order that he should get no more heat than he wanted, they placed a sort of screen in front of it adorned with the figures of idols worked in gold.  He would sit on a soft low stool, which was richly worked.  His table, which was also low and decorated in the same way, was covered with white table cloths and rather long napkins of the same material.  Then four very clean and beautiful girls brought water for his hands in one of those deep basins that they call xicales [i.e., gourds].  They held others like plates beneath it to catch the water, and brought him towels.  Two other women brought him maize-cakes.

When he began his meal they placed in front of him a sort of wooden screen, richly decorated with gold, so that no one should see him eat.  Then the four women retired, and four great chieftains, all old men, stood beside him.  He talked with them every now and then and asked them questions, and was a great favor he would sometimes offer one of them a dish of whatever tasted best…

Montezuma’s food was served on Cholula ware, some red and some black.  While he was dining the guards in the adjoining rooms did not dare to speak or make a noise above a whisper.  His servants brought him some of every kind of fruit that grew in the country, but he ate very little of it.  Sometimes they brought him in cups of pure gold a drink made from the cocoa-plant, which they said he took before visiting his wives…I saw them bring in a good fifty large jugs of this chocolate, all frothed up, of which he would drink a little.  They always served it with great reverence…

As soon as the great Montezuma dined, all the guards and many more of his household servants ate in their turn.  I think more than a thousand plates of food must have been brought in for them, and more than two thousand jugs of chocolate frothed up in the Mexican style, and infinite quantities of fruit, so that with his women and serving-maids and bread-makers and chocolate-makers his expenses must have been considerable…[Trans. by J.M. Cohen]

Also present at these banquets were performers of all types that Montezuma kept on hand for his amusement.  “There were dancers and stilt-walkers, and some who seemed to fly as they leapt through the air, and men rather like clowns to make him laugh.  There was a whole quarter full of these people who had no other occupation.”

One of Diaz’s responsibilities was to stand guard over the great Aztec ruler.  Some the anecdotes that arose from this experience practically rise to the level of comedy:

I also remember that there was once on guard a certain Trujillo, a very tall and strong man of excellent health.  He was a sailor, and when it was his turn for the night watch, he was so inconsiderate–I apologize for mentioning it–as to commit a nuisance [flatulence?] within Montezuma’s hearing.  As the valiant king of that country, Montezuma considered it both insulting and ill-mannered that this guard should do such a thing within his hearing and without consideration for his person.  He asked the page Orteguilla who this dirty and ill-bred person was; and Orteguilla replied that he was a man used to traveling on the seas, with no knowledge of politeness or good breeding.

There was another soldier called Pedro Lopez, a great cross-bowman, who was put on guard over Montezuma.  He was a decent man, though difficult to understand, and in the night he had some words with the officer of the watch about whether it was time to go on duty.  “To hell with this dog!” he shouted.  “I’m sick to death of always guarding him!”  Montezuma overheard this and brooded on it; and when [Hernando] Cortes came to visit him he told him about it.  Cortes was so furious that, good soldier that Lopez was, he ordered him to be flogged in our quarters; and after that all soldiers of the guard performed their watch silently and in good manners…

It is impressive, military men will recall with a knowing smile, just how useful a bit of focused punishment can be in certain situations.  When trying to get a proper sense of history, one must mix first-hand personal accounts with the writings of the historians.  It seems to me that neither type of writing, standing by itself, is really adequate in rounding out the complete picture.  Memories are often maligned by historians as fragmentary or faulty, it is true; but the testimonies of witnesses present at the scene of great events can be stunningly vivid and revealing.

Fortune does not wield all the cards in human affairs; maybe she does not even hold most of them.  It is the man on the scene, the man knee-deep in the churning waters of history’s rapids, struggling to maintain his footing and move forward towards through the rocks, who must always be given our most respectful deference.