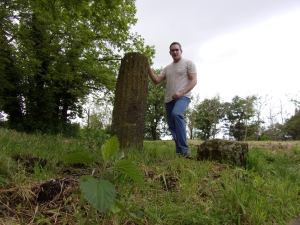 Today I visited the site of the old Roman town of Tusculum.  It is located in the Alban Hills outside Rome, near the modern town of Frascati.  It is close to Barco Borghese, Monte Porzio Catone, and Montecompatri.  In Cicero’s day, Tusculum was known as a fashionable spot for the elite to have summer villas.  Cicero himself owned a villa in Tusculum, and although its precise location has not yet been identified, he and his friends walked the ground there many times.

When we have walked the same ground on which great men once trod, when we have tasted the same air they once breathed, and cast our eyes across the same scenes they once gazed on while contemplating some problem–then, and only then, will we really know our subject.  In his treatise On Moral Ends, he has one of his interlocutors say to another:

The intangible spirit that resides in the former haunts of great men evokes their memories with more clarity and resonance.  You remember how I once went with you to Metapontum, and refused to go to our lodgings until I had made a detour to see the seat that Pythagoras had actually sat on, and where he had finally left this mortal life.  [V.II]

We can read the writings of Thomas Jefferson, and appreciate them for what they contain; yet walking the halls of Monticello gives us a feel for the man that somehow rounds out our understanding.  I remember seeing Harry Truman’s old poker table at his retreat in Key West, Florida, and think that it gave me a new appreciation for the man’s political powers.  The same rule holds true for any public figure or historical personality.  They leave something of their personality in the stones, earth, and air of the places they once inhabited.

I left Rome early, taking the train to the town of Frascati.  It was a relatively short ride, about 45 minutes.  Travelers on Italian trains are advised to remember to stamp (validate) their tickets after they buy them at the kiosk.  You can’t just buy a ticket and get on the train; you have to slide it through another pointless machine and get it validated.  Failure to do so can result in a 50 euro fine.  Through such means are bureaucracies kept busy, and travelers kept on their guard.

I walked to the ruins of Tusculum from Frascati.  I do not know the precise distance, but it seemed to be about three and a half or four miles, all of it uphill.  It was easy to find the road.  I saw a sign for the “Villa Tuscolana” and knew I was on the right track.  When I reached Tusculum, I was surprised to find I nearly had it all to myself.  There were some archaeology students conducting a dig, but almost no one else.  I had assumed that a place like this would have long ago been surveyed and excavated, but it was not so.  The photographs below give an accounting of what I saw.

I did not expect to see a skull getting unearthed in one part of the dig.  And I thought, memento mori.  Who knows what secrets were once housed inside that cranium?  Or what that person’s life story was?  We will never know; and one day, perhaps, our own old bones will be obsessively studied and cataloged by our remote ancestors.  The ancient amphitheater was fenced off, but I was still able to get close enough to it to take a decent photograph.

Near the very top of the hill (the Croce di Tuscolo) was an odd sight.  I wanted to explore some of the rocks near the amphitheater and waded through some thick grasses and brambles to get there.  Facing the valley below was a cavity hewn from one of the larger rocks.  I examined it in detail, but could get no idea as to its purpose.  But I did see a small Christian cross carved on a rock near it; and this, together with the fact that the niche had a perfect view of the valley below, caused me to think that this might have once been some refuge for a cenobitic monk or some other type of ascetic hermit.  Or, it may have simply been a storage place for weapons in medieval or early modern times.  I do not know.

Here are the best of the photographs: 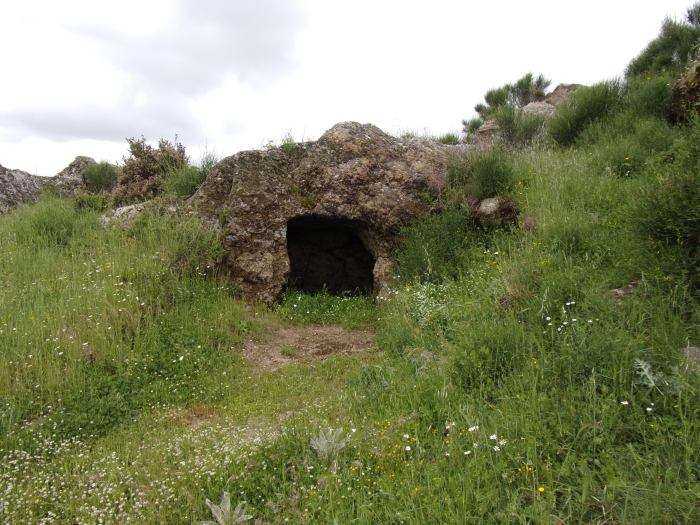 The carved niche described above. I would nickname this “The Hermit’s Niche”

Later this month, I will talk more about this, together with some related issues.

Read the groundbreaking translation of On Moral Ends here: