Skip to content
HomeThe Bricklayer Of Granada: A Tale Of The Alhambra 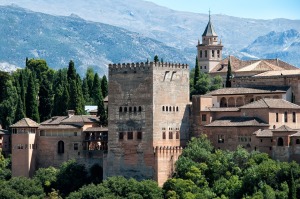 I was lucky enough today to find an old  copy of Washington Irving’s Tales of the Alhambra; the volume is lavishly illustrated and was actually published in Granada in the late 1940s.  The following tale is found in this Andalusian collection; it reminds us of the influence of Fortune in the lives of mortals, a theme that we have  explored frequently in these pages.

There was once a poor bricklayer and stone mason in Granada who, despite all his religious observances and almsgiving, remained poor.  He kept the days of the saints; he attended mass scrupulously; and he performed good works.  Yet his station never seemed to improve.  Despite this situation, he never abandoned himself to cynicism or despair; he was perpetually optimistic, an indication of his strength of character.  One dark night, he was roused from his sleep by a heavy knock on his front door.  The bricklayer heard a voice call to him from outside the door.

“O my brother in religion! I have heard you are a decent Christian and a man who can be trusted.  I need your help tonight.”

The mason opened the door and saw that before him stood a thin, hungry-looking priest.  He said, “I am indeed willing to help you, senhor padre, provided I am paid, for you can see that I am not a wealthy man and cannot be running around working for free.”

The priest promised to pay the mason, provided he was first blindfolded.  The request was strange, but the mason agreed to do it, perhaps more out of morbid curiosity than anything else.  The priest led the mason through a series of winding, labyrinthine lanes in the Alhambra, until they eventually came to a large house.  They opened the huge door, designed in the ornate Arabic style, and then entered a capacious courtyard.  At this point the blindfold was removed.  The place was dimly lit, but the mason could make out a fountain in the old Moorish style.  The fountain was not in use; and the priest asked the mason to make a special cavity under the base of the fountain.  He provided the mason with tools, bricks, and other implements to accomplish this job.  So the mason worked diligently on this project all night, but was unable to finish the job.

In the morning, the priest pressed a gold coin in the mason’s hand.  “Are you willing to come back and finish the job?” he asked.

“Absolutely, senhor padre, I am willing to do this, as long as I can be paid.  For you know my circumstances,” was the response.

And so the mason returned the next night and finished the construction of the vault under the fountain.  It was at this point that the priest gave the startling reason for the work.

“And now, brother, seeing how you have done such a good job with this vault, you must help me place the bodies that are supposed to be buried in it.”

The mason was both dumbfounded and disturbed by these words, but there was something about the priest’s demeanor or method that made it impossible for him to refuse.  He had already expended much effort on the vault, of course; he thought that it could hardly matter now for what purpose the vault was to be used.  So the priest conducted the mason to a secluded room of the estate, and showed him a series of jars.  The poor mason was expecting to see embalmed cadavers, or something of the sort; yet before him were arrayed a series of ceramic jars.  It soon became clear to him that the jars were filled with coins, and were very heavy.  He and the priest stashed the jars in the newly excavated vault, and then sealed up the space.  Once this was done, the area was made to look as if it had not been disturbed at all.

The priest then blindfolded the mason once again, and then led him through a confusing series of narrow alleys and streets, so that he could never know for certain where in the Alhambra the work had been done.  The priest then gave him two more gold coins, and told him to wait there until he heard the cathedral bell toll for matins.  He told the mason that if he removed the blindfold before then, he would be stricken by evil; then he left.  When the mason heard the bell toll, he removed the blindfold, and saw that he was along the banks of the River Xenil.  He then went promptly home.

The mason enjoyed the earnings he had made from constructing the priest’s vault, but, when all was said and done, he still remained as poor as he was before.  Yet, he still kept his religious observances, noting the days of the saints and the other appropriate holy days.  It was in his nature.  So things remained for a few years.  Then something new happened.

One day, as the mason was sitting outside the front door of his house, a wealthy landlord approached him.  This landlord had a reputation for being a greedy miser, and many people in Granada knew him by sight.  The landlord said to him, “I hear, friend, that you are poor.”  The mason replied in the affirmative.

“I have a good job I can offer you,” said the landlord.  “I have a house here in Alhambra that costs me much to maintain.  No one wants to live in it.  But I have heard that you are good with masonry and bricklaying, and I would like you to do some jobs for me.”  The poor mason accepted this offer, more intrigued than anything else.  The landlord conducted him to a vast, old Arabic house that was falling into serious disrepair.  Yet, there was something very familiar about the house; he knew, he sensed, deep in his bones, that he had been there before some years earlier.  He eventually realized that this was the very estate that the strange old priest had conducted him so many years earlier, and where he had helped him secret his treasure.  He asked the landlord who had owned the house previously.

“It used to be owned by a strange old priest, whom no one much liked.  He was a man of no consequence who now matters nothing at all.  There were rumors that he had amassed a large amount of wealth.  He died suddenly, and a horde of priests and friars scoured his property to see if they could find his money.  No one ever found anything.  All the same, there are rumors that the place is haunted with the ghost of the old priest, so no one will rent it.  So I am burdened with the expense of maintaining this beautiful, but decaying, old building.”

This is what the rich landlord told the mason.  By now, the mason knew what to do, and he acted quickly.  He told the landlord, “If you let me live here rent-free, I will do all that is necessary to repair and maintain the grounds.  I will restore it as it needs to be restored.”  The landlord immediately agreed to this proposition, happy to find someone so willing to work so hard for nothing–or so it seemed to him.  He said to himself, “By God!  What a fool this poor old mason is!  He is willing to stay in this place and restore it completely, and asks for nothing in return except free rent!  What a naive fool!”

These were the thoughts that went through the landlord’s head.  So he agreed to the deal, and the mason moved in with his family.  Soon, as the months passed by, the old house was restored.  And something else very strange happened, too.  People around Granada began to notice that the poor old mason’s situation steadily improved.  Slowly, steadily, he seemed to shed his old ways of poverty and take on the aspect of a gentleman.  His clothing, food, and circumstances improved dramatically.  No one could account for the source of this new good fortune; no one suspected where the money for this new transformation had come from.  And yet it happened nonetheless.  Over time, the once impoverished mason revealed himself to be one of the richest men in Granada.  He was observed to contribute frequently to the Church, and never revealed the secret of his wealth during his lifetime, except on his death-bed to his son.

We cannot know where, or when, in life our fortunes will change.  Riches are hidden behind the illusory facades of many things in this world.  Yet we must be ready to seize upon the opportunities that present themselves, and be willing to submit to the judgments of Fortune.

4 thoughts on “The Bricklayer Of Granada: A Tale Of The Alhambra”