Skip to content
HomeThe Villa Of The Papyri: A Glimpse At A Roman Book Collection

Sometimes an accident of history can preserve records of great value.  As is well-known, Mount Vesuvius in Italy erupted in 79 A.D. entombing the towns of Pompeii and Herculaneum in ash and ejecta.  In the eighteenth century, these sites began to be explored in a random and haphazard manner; one of the villas so discovered turned out to be the residence of a dedicated scholar.

Some have speculated that the villa’s owner may have been Marcus Calpurnius Piso, who was consul in 58 B.C., but we cannot be sure without further evidence.  There were hundreds of papyrus book rolls (i.e., “volumes”) spread out over several rooms, arranged in cabinets and cases. 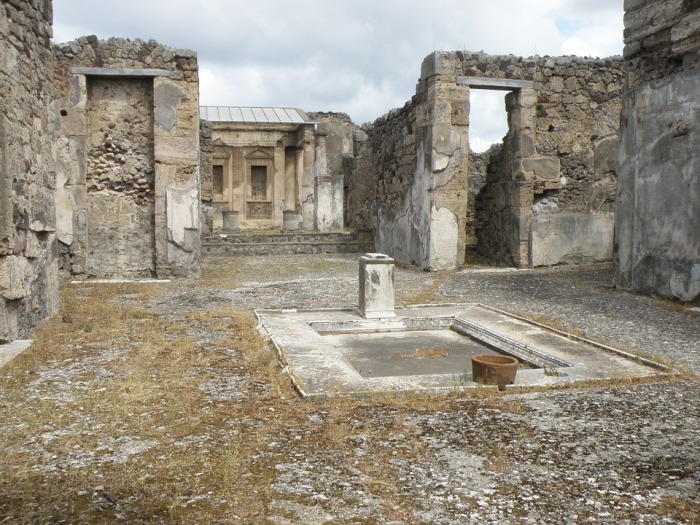 As might be expected, the books were in a very fragile state of preservation.  The heat and ash of the eruption had carbonized most of the rolls, and centuries of water and mineral immersion had made them still more delicate.  It was, in fact, a miracle that they even existed at all.  Techniques for “unrolling” and reading these books was not advanced when they were first discovered, and early attempts to preserve them or cut them open did more harm than good.  Yet despite all this, we at least have something.  What books are in this treasure-trove?  Most of the books deal with Epicurean philosophy, in all its branches:  physics, rhetoric, ethics, aesthetics, etc.  Many of the books are works of the philosopher Philodemus of Gadara, who flourished in the first century B.C.  We even have eight books of Epicurus’s own work On Nature, which is a rare find.  Epicurus himself was an extremely fecund writer, but very little of his output has survived.  G.W. Houston’s wonderful Inside Roman Libraries compiled a list of the authors of the Greek and Latin volumes at the villa that have so far been identified:

Surprisingly few Latin works were found.  What has been recovered are mostly scattered fragments of uncertain authorship.  A poem about the Battle of Actium has been recovered (Carmen De Bello Actiaco), as well as some possible fragments possibly from the antique poet Ennius.

A 1979 inventory of the recovered papyri listed 1,826 distinct items; that figure now stands at 1,850.  Not all of there are book rolls, however; many of them are fragments.  Prof. Houston estimates that the actual number of book rolls was probably somewhere between 600 to 1,000.  By any standard, this was a respectable collection of Epicurean writings.  Yet it is still only a tiny fraction of what was once a large corpus of material.  The biographer Diogenes Laertius, whose precious Lives of the Philosophers I have often relied on, tells us that there were about 17 main Epicurean philosophers; and many of these writers authored dozens of works.  The discoveries at the Villa of the Papyri fill us with regret, in many ways, by reminding us just how much of ancient literature has been lost.

But what do these papyri look like?  In one of Cicero’s surviving letters, he mentions how difficult it was for him to find well-edited texts of philosophical works.  Sloppy editing and copying could pose something of a problem for scholars; dedicated men often had to seek out a particular exemplar and have it copied locally.  Since all books had to be reproduced by a scribe’s labors, there were always going to be mistakes.  Some copyists were better than others, and some were better able to correct errors as they found them.  Knowledge had to be worked for; it was not just served up to anyone on a silver platter, as we see today.  The idea of laboriously copying out a book is something inconceivable to us in the modern era; that fact that this was how books were copied until the invention of print in the fifteenth century is something that should make us pause in wonder.

Most of the books at the villa are between 19 and 24 cm. in height; the columns of written text are between 15 and 18 cm.  When the book rolls were rolled up, their diameter was between 4 and 9 cm.  Fully unrolled books could be between 9 to 12 meters long.  Another interesting thing that scholars have noticed about the book rolls is that many of them contain “line counts”; that is, a number indicating the total number of lines in each roll.  What was the purpose of such stichometric counts?  One practical reason may have been to determine the copyist’s fee.  Then, as now, people working on texts often calculated their fees by the word or line.  Another curious fact is that the book rolls were already quite old when Vesuvius erupted.  Prof. Houston has estimated that the papyri were between 120 and 160 years old at the time of the eruption.  This is impressive:  while papyrus rolls were laborious and sometimes costly to produce, they could last more than one lifetime.

The inevitable impression that all this leaves on the reader is that knowledge is fragile and perishable.  We should try to imagine the effort and time that it would have taken the owner of the Villa of the Papyri to assemble his collection.  We should try to imagine the thousands of hours that copyists would have had to spend to produce the hundreds of rolls in the villa.  And all this knowledge, all this effort, was gone in the blink of an eye, the victim of geologic circumstance.  We gradually become aware just how precious books really are, and how we must ensure that physical copies of books–not digital copies–are protected and safeguarded.  Historical memory in our era is vanishing at an alarming rate; and when I say alarming, I mean truly alarming.  Many people in our societies have only the dimmest awareness of even recent historical events, if they have any awareness of them at all.  Digitization is not a solution to the problem:  in many ways, it is part of the problem itself.  It provides a false sense of security, and arguably promotes a cavalier attitude towards the preservation of knowledge.

Despite their sorry state, the papyri at the villa survived a physical disaster and the passage of centuries; they were at least readable to some extent. Had the “books” been electronic data in some computer, nothing would have survived at all.

One thought on “The Villa Of The Papyri: A Glimpse At A Roman Book Collection”