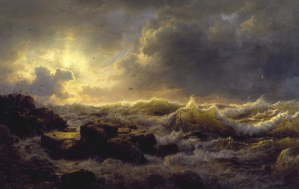 In the modern era we tend to minimize or downplay the influence of weather and geography on human activity.  In earlier periods of history, armies and fleets had a much more intimate relation with the inconstancy of the natural world.  Ancient man could not insulate himself from the ocean’s surges, the sky’s furies, or the impediments of geography; and perhaps for this reason our ancestors had a healthier respect for Nature’s capabilities.

This fact was illustrated to me recently after reading an account of the destruction of most of Octavian’s fleet by a storm near Sicily in the spring of 38 B.C.  This was during the chaotic period of civil wars and power struggles that convulsed the Roman state after the assassination of Julius Caesar in 44 B.C.  Octavian’s priority was to raise a large fleet to confront his naval opponent, Sextus Pompeius; he was assisted in this by his lieutenant Caius Calvisius Sabinus.  There was a preliminary engagement off the coast of Cumae between Pompeius and Calvisius which produced no clear victor; both sides retired to repair their ships and add to their numbers.  Pompeius seems to have sensed that a tremendous storm was coming, and retired his fleet to the Sicilian port of Messana (modern Messina).  The Greek historian Appian (V.10) provides a dramatic account of the effects of the storm on Octavian’s unfortunate fleet in the straits of Messina:

Pompeius was then inside the harbor of Messana.  The ships of Octavian were again shattered on the rough and inhospitable coast, dashing against the rocks and against each other, as they were not fully manned, and not under good control.  Menodorus [another of Octavian’s captains], apprehending that this rising storm would increase in violence, moved farther seaward and rode at anchor:  here on account of the depth of the water, the waves were less boisterous; and even here he had recourse to hard rowing to avoid being driven ashore, some of the others following his example, but most of them, thinking that the wind would subside, as it usually does in the spring time, moored themselves with anchors at either end, landward and seaward, pushing each other off with poles.  As the wind grew more violent, everything was thrown into confusion. 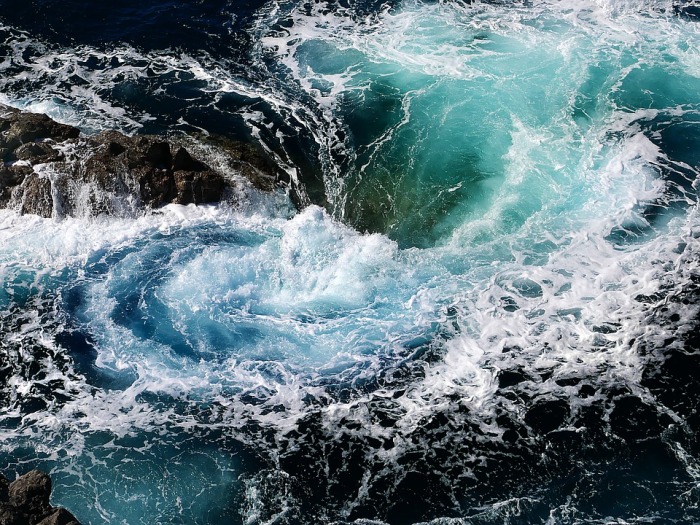 The ships collided, broke their anchors, and were thrown quivering on the shore or against one another.  Cries of alarm and groans of pain were mingled together, and exhortations that fell upon deaf ears.  Orders could not be heard, and there was no distinction between pilot and common sailor, knowledge and authority being alike unavailing.  The same destruction awaited those in the ships and those who fell overboard, the latter being crushed by wind, waves, and floating timber.  The sea was full of sails, spars, and men, the living and the dead.  Those who sought to escape by swimming to land were crushed against the rocks by the surf.  When the convulsion seized the water [i.e., giant whirlpools], as is usual in that strait, they were terrified, being unaccustomed to it, and then their vessels were whirled around and dashed against each other worse than ever.  As night came on the wind increased in fury, so that they perished no longer in the light but in the darkness.  [Trans. by Horace White]

This is a passage that, in dramatic power, equals anything in Thucydides.  Appian goes on to say that all through the night, cries and moans could be heard along the shore, as the dying called out to citizens who had collected on shore.  And yet, as the historian writes, “nothing could be done on either land or water.”  The dangers extended not just to those men in the water, but even to those lining the shore.  The force of the waves, the extreme winds, and the whirlpools in the strait of Messina all combined to make any kind of rescue effort impossible.  Appian specifically mentions “the whirlpool of the deep, holding everything in its grasp, allowed neither tarrying or escape.”  This was something more than just a storm; it must have been a typhoon, for we are told that “the fury of the tempest surpassed the memory of of the oldest inhabitants.  It was altogether unexampled, and the greater part of Octavian’s ships and men were destroyed by it.” 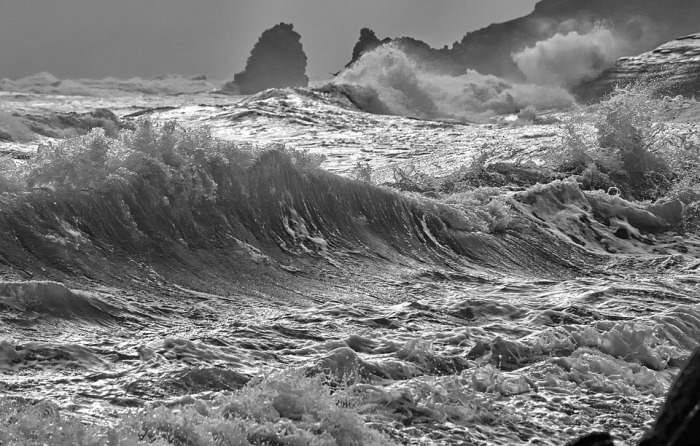 By late morning of the next day, the winds had died down, and the worst was over.  Yet the sea remained very rough for some time after.  We do not have a clear idea of the death toll; it must have at least been in the high hundreds, more likely exceeding a thousand.  Appian’s description of this terrible disaster permits us to make several observations.  The first is his correct (and important) comment that, contrary to popular belief, the seas farther away from the shore are often more calm than seas closer to shore.  Seeking deep water in a storm is usually a wise precaution.  The second observation concerns the “whirlpools” described by Appian.  Since at least Homeric times, with the legends of Charybdis and Scylla, these straits were known for their treacherous currents and vortices.  We can imagine that, during a colossal typhoon, such whirlpools must have been terrifying, easily able to suck in the wooden ships of the day and crush them with ease.  Appian does not venture to speculate on their origin, but we now know that the narrowness of the straits acts to concentrate the collective forces of currents and winds, and thereby cause such phenomena to be created.

Why, then, are such whirlpools not a problem today in the straits?  The short answer is that large, modern ships are able to tolerate the kinds of extreme stresses that ancient vessels could not withstand.  The whirlpools have not vanished; even today, the northern portion of the straits contain powerful whirlpools.  Marine biologists also tell us that the intense currents of the strait have created a unique ecosystem.

Adroit as he was, Octavian found a way to recover from the disaster.  Appian reports that less than half of his ships had been saved, and even those were seriously damaged.  He left some of his officers to supervise the salvage efforts, and set out for Campania, “much cast down” (i.e., depressed).  He needed ships and money quickly; but he had no time to build ships, and he found his few willing to contribute to his cause.  Eventually, an alliance with Antony would come to his rescue.  Appian wryly notes, “He was always clever at discovering what was for his advantage.”  Behind every disaster, he saw opportunity.

Happy Father's Day to all you fathers out there. It's a damn hard job, and often a thankless one. (I know I didn't make life easy on my own father!). But keep up the good work, keep rolling, and keep crunching!