Skip to content
HomeThe Travels Of Benjamin Of Tudela 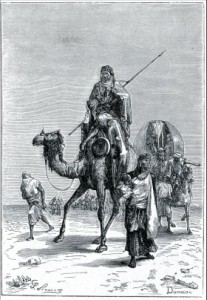 The motivations of intrepid travelers are not difficult to discern.  The desire to get out, to get away from everything that reeks of contemptible familiarity, to smash through obstacles and barriers both mental and physical, to be confronted with stimuli both terrifying and strange:  these would be primary impulses.  Following close behind them would be a thirst to seek one’s fortune, to take a certain measure of the world and its people, and to test one’s mettle against the mettlesome natures of others.  It has been so for centuries.

The name of Benjamin of Tudela is not likely to be a familiar one to the modern reader.  But he ranks as one of the most accomplished of the great medieval travelers, occupying the same ground as such luminaries as Ibn Battuta, Ibn Fadlan, and the Venetian Marco Polo.  He reminds us more of Ibn Fadlan than these other two names; for he never indulges in wild speculation, never digresses, and gives an impression of reliability that we find wanting at times in the wily Venetian and the loquacious Ibn Battuta.  He states where he has been, records his strongest impressions, and moves on.

He was born in the city of Tudela, in the Kingdom of Navarre in Castile around 1130.  It is a tragedy that we know so little of his early life, but it seems he was raised as a devout Jew and became proficient in rabbinical learning by his early adulthood.  His name in Hebrew is given as  בִּנְיָמִין מִטּוּדֶלָה; the Arabs, who respected him highly, know him as Binyamin Al-Tutayli (بنيامين التطيلي).  Spain in his era was a ferment of languages and cultures; without doubt Tudela would have been proficient in Arabic, Spanish, and Hebrew, and probably Latin, by the time he set out on his travels.  His interests in business and a curiosity about Jewish communities in foreign lands, emerge as likely early incentives to travel.  But once the lust for travel gets in a man’s blood, he is impelled by an irresistible forward momentum that has a logic all its own.

We do not know the precise date of the start of his travels, or even his exact route.  In this regard he is like Ibn Battuta and Ibn Fadlan, in whose writings we find that the recordation of an accurate itinerary is not always viewed as important.  He appears to have left Spain around 1165; from Zaragoza he proceeded to Barcelona and Girona, and from there to France.  From France he meandered down the Italian peninsula to Rome, and then sailed for Greece and Constantinople.  He makes a point of mentioning the Jewish communities in every city he visits, a fact that makes his account a work of great value to ethnographers and historians.  His work is entitled מסעות בנימין, or Masa’ot Binyamin (i.e., Book of Travels).  He chose to write in Hebrew, rather than Arabic or Latin, suggesting that one of his aims was to produce a kind of practical travel guide for his co-religionists.  Here he comments on Genoa and Pisa:

The Genoese are masters of the sea and build vessels called galleys by means of which they carry on war in many places and bring home a vast deal of plunder and booty to Genoa.  They are at war with the Pisans.  From their city to that of Pisa, is a distance of two days journey. The latter is of very great extent, containing about ten thousand fortified houses, from which war is carried on in times of civil commotion. All the inhabitants are brave, no king nor prince governs over them, the supreme authority being vested in senators chosen by the people. The principal of the twenty Jews resident at Pisa, are:  R. Moshe, R. Chaim and R. Joseph. The city has no walls, stands about four miles from the sea and the navigation is carried on by means of vessels who ply upon the Arno, a river which runs through the very city.  To Lucca [it is] four parasangs. This is a large city and contains about forty Jews, the principal of them are:  R. David, R. Sh’muel and R. Ja’acob.  [Trans. by A. Asher]

Reading Tudela gives us an idea of just how small medieval cities were in comparison to the groaning metropolises of today.  In all of Rome, he says, there were only two hundred Jews; but we are startled to discover the trusted, cordial relations between Jews and Christians in Rome at that time.  Perhaps historians—and we moderns—tend to underestimate the degree to which different faiths have existed in harmony with each other:

The two hundred Jews who live there are very much respected and pay tribute to no one. Some of them are officers in the service of Pope Alexander, who is the principal ecclesiastic and head of the Christian church. The principal of the many eminent Jews resident there are R. Daniel and R. Jechiel. The latter is one of the pope’s officers, a handsome, prudent and wise man, who frequents the pope’s palace being the steward of his household and minister of his private property.  R. Jechiel is a descendant of R. Nathan, the author of the Book Aruch and its comments.

As we noted earlier, one of the striking features of Tudela’s account is the direct simplicity of his narrative.  Where Ibn Battuta and Polo are wearyingly prolix and digressive, Tudela gets right to the point, and moves on; he has a businessman’s desire convey only what is necessary, and no more.  Here he describes the Hippodrome in Constantinople in the simplest of terms:

The Hippodrome is a public place near the wall of the palace, set aside for the sports of the king. Every year the birthday of Jisho the Nazarene is celebrated there by public rejoicings.  On these occasions you may there see representations of all the nations, who inhabit the different parts of the world and surprising feats of jugglery.  Lions, bears, leopards and wild asses as well as birds, that have been trained to fight each other, are also exhibited, and all this sport, the equal of which is to be met with nowhere, is carried on in the presence of the king and the queen.

Tudela was astounded at the riches of Constantinople:

The Greeks who inhabit the country are extremely rich and possess great wealth of gold and precious stones. They dress in garments of silk, ornamented by gold and other valuable materials; they ride upon horses and in their appearance they are like princes. The country is rich producing all sorts of delicacies as well abundance of bread, meat and wine and nothing upon earth equals their wealth. They are well skilled in the Greek sciences and live comfortable, every man under his vine and his fig tree. 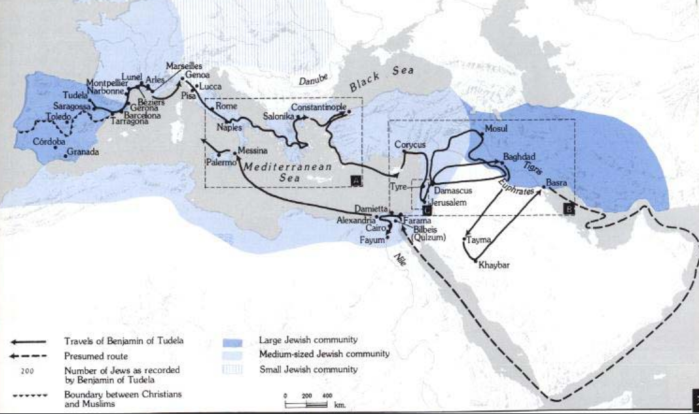 Not everything was to his liking, however.  In Cyprus he finds an obscure community of what he calls “heretic” Jews:  “Besides the rabbanitic Jews in this island, there is a community of heretic Jews, called Kaphrossin, or “cyprians.”  They are Epicureans, and the Jews excommunicate them everywhere.  The evening of the sabbath is profaned, and that of the sun day kept holy by these sectarians.”  But it is in the Arabic east that Tudela really comes alive.  He is able to speak the local language and interact with government officials and people in the street.  He also finds large Jewish communities in Syria and Iraq, prosperous and contented.  His description of the so-called “Assassins” constitutes one of our most reliable accounts of this dreaded secret society, and shows his acute ability to observe foreign customs.  His observations in Baghdad and at the court of the caliph are worth quoting at length.  Tudela reckons the Jewish population of Baghdad as no less than 40,000, an astonishing figure if correct.  He claims the Abbasid caliph was a learned man who “read and wrote” Hebrew and was “well-versed” in Jewish law, something that would have been unheard of in a European ruler of that era:

The palace of the caliph at Baghdad is three miles in extent, it contains a large park of all sorts of trees, both useful and ornamental and all sorts of beasts, as well as a pond of water led thither from the river Tigris; and whenever the caliph desires to enjoy himself and to sport and to carouse, birds, beasts and fishes are prepared for him and for his counselors, whom he invites to his palace. This great Abassid is extremely kind towards the Jews, many of his officers being of that nation; he understands all languages, is well versed in the Mosaic law and reads and writes the Hebrew language.  He enjoys nothing, but what he earns by the labor of his own hands and therefore manufactures coverlets which he stamps with his seal and which his officers sell in the public market.  These articles are purchased by the nobles of the land and from their produce his necessaries are provided. The caliph is an excellent man, trustworthy and kind-hearted towards everyone, but generally invisible to the Mahomedans…All the brothers and other members of the caliph’s family, are accustomed to kiss his garments, and every one of them possesses a palace within that of the caliph…

In all Tudela is said to have visited three hundred cities.  We cannot linger on his descriptions of Alexandria, Damascus, and the other great cities of the east and central Europe; it is enough to say that his observations are always based on direct experience, never rumor or hearsay.  He must have been a man of importance in his community, for no ordinary traveler would have been given access to the papal court in Rome or the halls of the Abbasids in Baghdad; perhaps he was an envoy of some kind, or had been entrusted with smoothing over the passage of other Jewish pilgrims to the various holy sites in Palestine.  His account ends abruptly, and we regret knowing nothing of his later life.  Yet here at least is an objective observer, a man who never shrinks from the rigors of the road, or the strangeness of foreign customs.

In his Lives of the Philosophers, the Greek biographer Diogenes Laertius (II.119) relates an anecdote about the Athenian philosopher Stilpo.  The old sage had acquired a degree of notoriety from his teachings and wisdom, and when he walked the streets, people would come out of their workshops to look at him.  A companion told him, “They are looking at you as if you were some creature.”  Stilpo replied, “No, they are looking at me as if I were a genuine man.”  Tudela died in 1173.  And of him we could say the very same thing.

Read more about intrepid explorers and travelers in Digest:

One thought on “The Travels Of Benjamin Of Tudela”