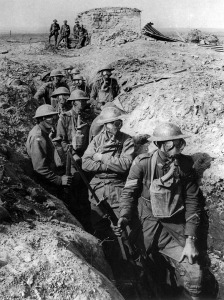 The greed and callousness of combat weapons designers have resulted in the deaths of many men.  Nowhere else has this fact been more starkly portrayed than in the story of what may be the worst small arm ever made, the Chauchat (also called the Fusil-Mitrailleur mle 1915, or the CSRG).  It was a French light machine gun designed for use at the squad level on the eve of the First World War.  The story of the Chauchat reveals much about the workings of the military-industrial complex, and how that combination can work to undermine the welfare of an army.

The problems with the Chauchat began with its design.  Rather than imitate the more robust British and German light weapons designs, the Chauchat employed an unorthodox “long recoil” system.  In the “long recoil” machine gun, the barrel and breech move to the rear after firing; the barrel then cycles forward again, with the bolt remaining in place until the next round is fed.  The problem with the design is that it is complicated.  What works well on the firing range is rarely what works well in the mud, rain, and stress of combat.  The more complex a tool of any kind is, the more likely it is to malfunction.  And so it proved with the Chauchat.

The other incomprehensible design feature of the weapon was the half-moon magazine that was affixed under the gun barrel.  It interfered with the fast handling of the weapon, and the magazines themselves were unsuitable for their role.  For some reason, the magazines had a section of metal cut out of their sides, supposedly so that soldiers could see the quantity of rounds they had remaining in each magazine.  What happened, of course, is that the open magazines quickly became fouled with mud and grit, causing jams that could not be remedied.

But this was only the beginning of the gun’s problems.  With the rush to produce large numbers of weapons of all types in 1915, French authorities farmed out the production of the weapon to several different manufacturers, some of which were not up to the job.  Proper oversight by the military authorities was feeble or nonexistent, and so some of these companies skimped on costs and pocketed the difference.  Inferior materials, inadequate machining, and poor assembly were the order of the day.

The bipod at the front of the weapon was also worthless.  It bent at the slightest excuse, and was incapable of stabilizing the barrel after a few bursts of fire.  Any French soldier holding a Chauchat was practically asking for a quick combat death, and for this reason the weapon was scrupulously avoided by anyone who could find something better.

Worse still, the French authorities tried to fob off the Chauchat on the unsuspecting Americans after the latter entered the war in 1917.  Thousands of them were reconfigured to accept the American 7.62 mm round, and some other minor modifications were made.  At the time, the US Army did not truly have a squad automatic weapon (excepting the strange Browning Automatic Rifle, or BAR, which was in a class by itself).

The Americans quickly found out that, in combat, the Chauchat was an extremely dangerous weapon to be carrying:  it jammed whenever possible, it broke easily, it was not accurate, and it was cumbersome to carry and position.  Many soldiers simply refused to use them.  Without doubt, the weapon was directly responsible for the deaths of many.

After the First World War, the scandal that was the Chauchat prompted a parliamentary investigation.  As often happens in such situations, a great deal of puffery from politicians resulted in very little actually accomplished.  What was clear, however, was that the production oversight of the weapon had been virtually nonexistent.  Corruption could not help but thrive in this setting.  Inferior materials were substituted for proper ones, and no effort at quality control was exerted.

The result was a complete disaster.  Most authorities cite the Chauchat as the single worst weapon made in the modern period.  The venality and greed of weapons producers, and the contributory negligence of the French High Command, both combined to pronounce death sentences on soldiers condemned to use the weapon.  The whole episode should serve as a cautionary tale on the need for oversight and control of government weapons contracts.  It is a lesson, unfortunately, that has has not been learned or reflected on.