Skip to content
HomeBrazil’s “Rubber Soldiers”: A Tale Of Courage And Woe 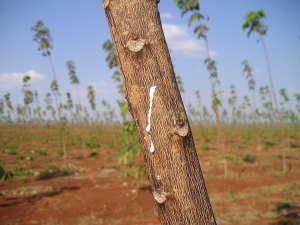 I had a chance yesterday to learn more about a strange and tragic incident in recent Brazilian history:  the country’s so-called “rubber soldiers” (soldados na borracha) program of the Second World War.  The story is almost totally unknown in the United States, and for this reason I thought it would be worthwhile to share some details about it here.

At the beginning of the United States’s involvement in World War II in 1941, there was a huge demand for the production of all types of wartime vehicles and machinery.  Many of these products used rubber in one form or another; and in those days rubber came almost exclusively from a natural source, the sap of the Brazilian rubber tree hevea brasiliensis.  Chemists were working frantically to produce synthetic rubber but results were not forthcoming at the time.

The rubber tree was indigenous to Brazil; the secrets of tapping the latex-rich sap had been known to the Amazonian Indians for thousands of years.  But the trees were in remote places, and Brazil never put the effort into rubber harvesting in the same way it focused on sugar, coffee, and other agricultural products.  In 1876 a rubber tree seedling was smuggled out of Brazil and transported to Malaysia; soon rubber plantations in the Indies were well-established and tremendously successful.

But all this changed with the Japanese conquest of Southeast Asia.  In one stroke, the Western allies were expelled from the region; without rubber, it would not be possible to prosecute the war at the level of intensity needed for victory.

In 1942 the United States and Brazil entered into joint development agreement on rubber production.  In return for cheap loans, economic aid, and professional assistance, Brazil agreed to recruit an “army” of men to travel into the remote interior of the country to tap rubber trees for latex.  It seemed like a reasonable arrangement, and it would have been had the program been implemented honestly.

A massive propaganda campaign was launched by the Brazilian government to get men into the jungle and harvesting rubber.  Recruitment drives presented the Amazon as a new vista for opportunity, a chance to start a new life, and a land of plenty.  Volunteers were given the impression that their contribution was vital to the war effort, and that they would be an integral part of something greater than themselves.

Workers were promised a cash incentive of $100 up front, plus an attractive wage; the government also promised to take care of health issues, security, housing, food, clothing, and everything else related to security and comfort.  In reliance on the promises put out by the program’s propaganda, whole communities signed up for the journey to the Amazon, which often took them more than 1,500 miles from their homes.

None of these promises materialized.  Most of the men who signed up for the program–many even took their families, believing the government promises of free housing–were uneducated and totally uninformed of what kind of life awaited them in the jungle.  But they would soon find out.

What actually awaited them was a Conradian descent into an unrelenting heart of darkness.  The rubber “industry” was entirely in the hands of ruthless bosses called seringalistas who alone had the final say whether someone was paid.  Conditions were akin to slavery, pure and simple:  new arrivals were given a knife to cut into rubber trees, a few bare necessities, and then were abandoned to fend for themselves.

Pay basically did not exist; like American coal miners of the Appalachians in the early 20th century, the bosses made everyone buy provisions at their own stores on credit.  Food and housing did not really exist; tappers had to forage if they could.  If they could not, they and their families starved. No one saw anything that looked like real “wages.”  Any earnings they made by selling the meager amounts of rubber collected would be charged as debits against them by the corrupt rubber bosses who controlled everything.  Some of the stories defy description.  Many of the tappers could only survive by hunting wild animals in the forest; they went without anything resembling medical care, education, or even the rudiments of civilized life.  Even the seringalistas were illiterate.

The money, equipment, and loans provided by the United States for the program went into the pockets of government officials in Rio de Janeiro and other places, never to be used for their intended purposes.  Government supervision was laughable or non-existent.  It is estimated that one-third of the volunteers died within the first year of the program (1943); before the war was over, that ratio would climb to nearly one-half.

Worse still, the rubber tappers who survived were indentured to the seringal permanently.  They could not leave, as rubber bosses saddled them with permanent debts that were inherited from one generation to the next.  Even when the war ended, most of the recruits–that is, the ones that had not died of exposure, typhus, tropical diseases, or starvation–had to stay in the Amazon.  Most of them never saw their home towns again.

An even more cruel irony is that the program did not achieve its stated objectives.  For all the suffering, the expenditure of tens of millions of dollars, and the loss of tens of thousands of lives, rubber production in Brazil saw only a middling increase during the war years.  The numbers tell the story:  rubber output rose from 16,135 tons in 1940 to 22,350 tons in 1944.  This increase was insignificant when compared to the resources expended in the project.

The rubber tappers and their ordeals were nearly forgotten.  The few who survived were awarded a pension of about $500 per month from the Brazilian government in 1988, a risible amount when placed against the blood and suffering involved.  In 2015, the government agreed to pay the surviving members of the program the equivalent of about $7800 in lump sum distributions; but by then there were only about 15,000 elderly rubber tappers still alive.

To learn more about the struggles of men in adversity, and to learn how they overcame the odds, check out my acclaimed, genre-creating books Thirty-Seven and Pantheon.