Any fortress can be stormed, and any city can be taken.  It is a matter of using the correct tactics, combined with daring and imaginative leadership.  Some citadels fall to guile, and others to brute force; still others yield to a combination of the two.  We will consider the fall of Naples, an event that took place during the Gothic War (A.D. 535-554).  This was one of the emperor Justinian’s wars to reassert imperial control over Italy from the occupying Goths.

After Justinian’s star general Belisarius conquered Sicily, he landed a force in Italy and began to advance on Naples in the spring of 536.  After moving into position near the city, he summoned representatives of the occupying barbarians to call for the peaceful surrender of the city.  The Goths refused; their representative, a man named Stephanus, gave Belisarius a response that bordered on insolent.  Stephanus told the Romans that they were wasting their time.

Belisarius answered in this way:

Whether we acted wisely or not in deciding to come here is not a question we intend to put before the Neapolitans.  But we desire that you consider carefully such matters as are appropriate to your deliberations and then act in accordance with your own interests.  Receive the emperor’s [Justinian’s] army into your city, which has come to secure your freedom and that of the other Italians, and do not choose what will bring on you the most grievous misfortunes…

But as for the Goths who are present, we give them a choice, either to array themselves hereafter on our side under the great emperor, or to go to their homes entirely free from harm.  Because if both you and they disregard all these considerations and dare to raise arms against us, it will be necessary for us also, if God wills it, to treat whomever we meet as an enemy.[1]

But the Neapolitans put him off, offering one excuse after another.  In the meantime they fortified the city heavily, and gave no intention of accepting his conditions.  Time was short; he wanted to move against occupied Rome without delay but could not do so as long as Naples remained in enemy hands.  And then fortune intervened, as it often does, to turn the tide of fate in his favor.

Naples was supplied by an old aqueduct that led directly into the city.  One of Belisarius’s soldiers, an Isaurian, decided to explore it in order to better understand its construction.  As the aqueduct approached the outer walls of the city, it narrowed as it came into contact with solid rock.  The water-channel then became a narrow tunnel leading directly into the city.  The entrance was not wide enough to allow a soldier equipped with weapons and armor to enter.  But the Isaurian realized that if the tunnel entrance were widened, a force of men could gain entrance to the city by stealth. 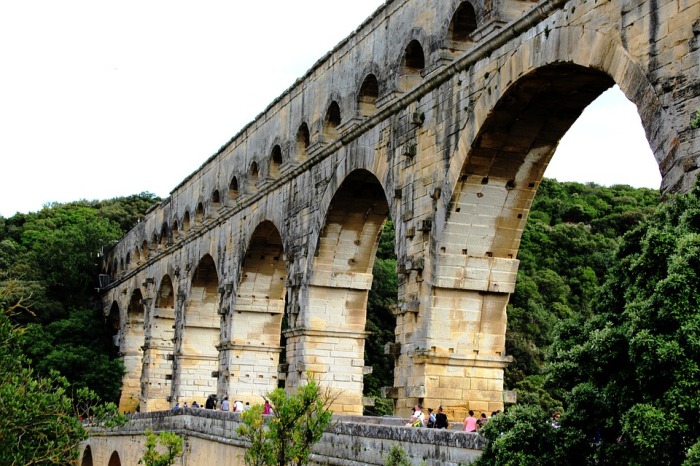 Belisarius was greatly pleased to hear this news.  He immediately ordered his men to begin work on the plan in the greatest secrecy.  Rather than use chisels and picks–which might make a great deal of noise–he had the men use boring implements, rasps, and abrasive tools to grind down the entrance to the tunnel.  Soon the work was done.

Summoning Stephanus one last time, he gave him a final opportunity to yield the city to him and avoid bloodshed.  He said:

I have witnessed the capture of cities many times and am well acquainted with what takes place at such a time.  They slay all the men of every age and, as for the women, although they beg to die, they are not given the gift of death but are carried off for outrage and suffer treatment that is abominable and most pitiable…When I see Naples falling victim to such a fate, as in the mirror of the cities that have been captured in times past, I am moved to pity it and you its inhabitants…

I will be unable to control the fury of [my] men if they capture the city by act of war.  While, therefore, it is still within your power to choose and act to your advantage, adopt the better course and avoid misfortune.  For when it falls upon you, as it probably will, you will not justly blame fortune, but your own judgment.[2]

This is what Belisarius said.  When he was again rebuffed, he prepared to take the city by force.  He had about four hundred men at night enter through the secret tunnel carrying weapons and lanterns.  They also carried trumpets and noise-making devices to throw the city into terror once they had penetrated its interior.  They also brought ladders and other climbing equipment.  It was a daring and dangerous gamble, but if it paid off the city would belong to the Romans.

The aqueduct was covered with a roof as it entered the city, so the raiders were not able to tell precisely where they were and how far they had gone.  Eventually they found a gap in the roof of the aqueduct, and saw how far elevated they were above the city.  Using ladders and straps, the soldiers climbed out of the aqueduct, and attacked a small garrison of Goths manning two watch-towers.

The trumpets were sounded, and Belisarius moved the bulk of his army to the part of the city wall that his men had already secured.  His forces scaled the walls and made it into the city, and once there, overwhelmed the shocked population.  When Belisarius later made his victory speech to his army, he concluded with these words:

And let the conquered learn by experience what kind of friends they have lost by reason of foolish counsel.

The city was his, and fairly won.  He moved quickly from there to Rome, which would prove to be the greatest prize of the war.

5 thoughts on “Any City Can Be Taken”