Skip to content
HomeThe Dangers Arising From One’s Subordinates: The Case Of Eumenes

No matter how much ability a commander may have, his purposes will ultimately come to nothing if he is surrounded by discontented or disloyal associates.  It was for this reason that, as the historian Sallust relates, the Roman general Metellus decided to send his disloyal subordinate Marius back to Rome.  A further example of this is provided by the career of the Greek general Eumenes of Cardia (362–316 B.C.).

In the complicated and convoluted power-struggles that convulsed the Greek world in Asia following the death of Alexander the Great, Eumenes featured prominently.  There was a general breakdown in military discipline as armies preferred to command their generals rather than be commanded by them.  The historian Cornelius Nepos, who lived in the final years of the Roman republic, puts it this way:

That phalanx of Alexander the Great, which had conquered Asia and defeated the Persians, finally after so much glory (as well as license), proposed to command its leaders rather than be commanded by them, just as our [Roman] veterans of the present day do.  Thus there is the danger that our men may do what these Greeks did:  namely, lose everything through their intemperance and indiscipline.  They would ruin not only those who might work with them, but also those who fight against them. If anyone reads about the deeds of these military men of that era, he would become aware of the same things happening now; and he would judge that nothing at all is different except the time  [Eumenes 8].

Eventually Eumenes came into conflict with another competing general named Antigonus.  In 317 B.C. Antigonus and his forces had taken up winter quarters in the Persian province of Media.  Eumenes had defeated him at the Battle of Paraetacae and had forced him to withdraw to Media.  Eumenes himself took up his own winter quarters in a neighboring part of Persia; but the distribution and disposition of his forces was not done according to his own wishes, but according to the desires of his men.  And this was not a good thing:  men must be commanded by their leaders, and not the other way around.  Eumenes was in a difficult position because he was not a Macedonian; and for this reason he never won the full loyalty of his ranking subordinates.  Eventually this would prove to be what ruined him.  In hindsight, he should have replaced all his officers with men of proven loyalty and ability.

There were two routes leading from where Antigonus’s camp was in Media, to where Eumenes’s camp was.  One of these routes was through a difficult and uninhabited desert region that would have taken ten days to cross.  The other route was more circuitous, but safer and having the advantage of offering food and water along the way.  Antigonus decided to pick the more difficult route; he believed he could surprise Eumenes by taking the lesser-anticipated route and then launching a lightning-quick strike against his enemy’s camp. 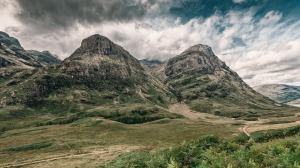 So Antigonus ordered to be prepared cooked food (so that fires would not have to be lit during the journey) and ample supplies of water.  He maintained the strictest secrecy about his precise line of march.  When he was about halfway through the desert, Antigonus realized that, contrary to his orders, some of his men had lit fires to keep warm.  In the desert, the light from these fires could be seen a long distance away; and Eumenes’s sentries did indeed see the fires and realized what was coming for them.  Eumenes here hit upon a clever stratagem to deflect his enemy from the attack.  He realized that Antigonus still had about five days’ journey through the desert before he would be in a position to attack him.

This is what he did.  He sent out selected groups of men to various mountains that would be in Antigonus’s line of march as he approached the camp of Eumenes.  He ordered them to light fires at various places in the mountains, and then to repeat this on successive nights.  The idea was to give the impression that the hills were filled with armed units, waiting to fall on any approaching force.  The stratagem worked:  Antigonus saw the fires and believed that his plan had been exposed, and that he was heading into a trap.  He thus cancelled his plan, and was forced to take a different route.  By means of this device, Eumenes saved himself.

2 thoughts on “The Dangers Arising From One’s Subordinates: The Case Of Eumenes”