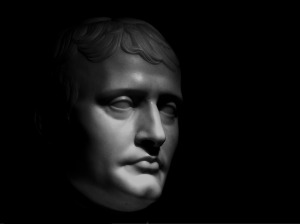 By 1810 Napoleon was the master of continental Europe.  He had been unable to force the British to accept an accommodation, but nevertheless remained confident that his “Continental System” would bring the recalcitrant islanders to heel.  The system, in effect a massive blockade, forbade European merchants from having any economic intercourse with Britain.  Prussia and Austria had been forced to accept the system in 1807 and 1809, and Napoleon was determined to make the Russians accept it as well.

Was the system working?  The embargo no doubt imposed great strains on the British economy; there had been several high-profile bankruptcies of London trading firms that the French believed was evidence of its effectiveness.  Trade had declined, and between 1810 and 1812, there were food shortages and inflation.  Liverpool had about a 17 percent unemployment rate at this time.  But the British economy was not on its knees, and could still draw on an extensive network of colonies and outside sources for economic sustenance.  Without an actual physical blockade of the British Isles with warships, an embargo by decree from the continent stood little chance of long-term success.  By 1810 some merchants had begun openly to flout it, and there was little in the way of an effective enforcement mechanism.

Napoleon had always been concerned about tsar Alexander I of Russia.  He had tried to cultivate him, and believed he had made some headway in winning him over, but the Russian sovereign was a slippery and mysterious figure, motivated by deep religious and mystical stirrings that the French emperor—basically an Enlightenment rationalist—could not comprehend.  Alexander was prickly and obstinate, and did not like taking orders from Napoleon, a man whom he had come to believe was the devil incarnate.  On Napoleon’s part, he felt betrayed by the Russian prince’s unwillingness to accept his offers of a military and economic alliance.  He knew Alexander was violating the Continental System and feared that if the tsar’s blatant independence were to go unpunished, the entire French empire might be at risk.  In late February 1812, he made one last attempt to make a deal with Alexander that might avoid war.  Writing to him directly, Napoleon said:

I cannot disguise from myself that Your Majesty no longer has any friendship for me…You raise all kinds of difficulties on the subject of Oldenburg, when I do not refuse an equivalent for that country, which has always been a hotbed of English smugglers…Allow me to say frankly to Your Majesty that you forget the benefits you have derived from this alliance, and yet what has happened since Tilsit? By the treaty of Tilsit you should have restored Moldavia and Wallachia to Turkey; yet, instead of restoring those provinces, you have united them to your empire.  Moldavia and Wallachia form one-third of Turkey in Europe; it is an immense addition which in resting the vast empire of Your Majesty on the Danube, deprives Turkey of all force.

Alexander was not moved.  In his reply to Napoleon, he said, “Neither my feeling nor my politics have changed, and I only desire the maintenance and consolidation of our alliance.  Am I not rather allowed to suppose that it is Your Majesty who has changed towards me?…If war must begin, I will know how to fight and sell my life dearly.”

Thus the stage was set for one of the most catastrophic military disasters in European history.  On June 24, 1812, Napoleon’s massive Grande Armée began to cross the Niemen River into Russia; at that time it numbered an incredible 615,000 men, easily the largest invasion force that had ever been assembled under one flag.  But the tsar was not quaking with fear.  In 1811 he had said, “A Frenchman is brave but long privations and bad climate would wear him down and discourage him.  Our climate, our winter, will fight on our side.”  It would be a prophetic comment.

The Russians retreated steadily before Napoleon’s advance, but were using tactics unlike any that the French conqueror had faced before.  “Scorched earth” was the order of the day:  crops, livestock, structures, bridges, supplies were all destroyed.  Armies in Napoleon’s time were used to living off the land, but in Russia there was literally nothing to live off of.  With no fodder for his horses (essential vehicles of logistics), the animals began to die off at an alarming rate; for every day of the 175 days that the French army was in Russia, an average of 1,000 horses would die from starvation, heat stroke, and other ailments.

But the worst was yet to come.  The disease typhus thrives precisely in the kind of unsanitary conditions that prevailed in the Grande Armée; the fever is spread by an organism (Rickettsia prowazekii) that is carried by lice.  The scourge hit Napoleon’s men during the first week of the invasion; by the third week, about 80,000 men had either died or were incapacitated by it.  By the end of July 1812, his force had been reduced by and incredible 20%.  There was no way to check the spread of the contagion because medical science did not even know what caused it.  If measures had been taken to improve hygiene, make bathing mandatory, and wash all clothing, conditions may at least have stabilized; but as it was, the Grande Armée was defenseless before this pestilential assault.  The microorganism had its way.  As Alexander had predicted, General Typhus had entered the battle against the French, and he was a commander who could not be bargained with.

The numbers tell the tale.  Just how dramatic the carnage was is shown in the famous diagram below, prepared in 1869 by Charles-Joseph Minard.  The light-colored area represents the number of men entering Russia, while the black area represents the number of men who made it back after the retreat from Moscow.  Few graphs have ever conveyed such sanguine and sobering realities.

A French doctor, J.R.L. de Kerchhove, described the disease in this way:

The infection manifested itself through general malaise, accompanied most often by a state of languor; a weak, slow or irregular pulse; an alteration in facial traits; a difficulty executing movements…extreme fatigue, difficulty standing, lack of appetite; vertigo, ringing in the ear, nausea, headaches, were very frequent; sometimes [the patient] suffered from vomiting; sometimes the tongue was covered in a white or yellow mucus.

After a few days a fever would take hold, and then the patient would succumb rapidly.  Typhus was not the only microbial killer of the Grande Armée (dysentery was also common), but it was the major one.  By the end of 1812, the French emperor had lost about 135,000 men.  It would not be for another 99 years before medical science would make the connection between lice and typhus.  Conditions in the ranks bordered on desperate; many men committed suicide, unwilling or unable to endure the constant privation.  Local commanders could do little more than exhort their men to keep moving; falling behind meant certain death, either from the hostile Russian peasantry or from disease.  There is evidence to suggest that Napoleon’s commanders kept the worst of the news from him; even so, with his acute sensitivity, he could see what was happening right before his eyes.  But there could be no turning back; his only hope of ending the war would be to compel the Russians to meet him in battle and defeat them.  In this he did finally get his chance at the Battle of Borodino, which was fought on September 7, 1812.

Although the battle is generally considered a victory for Napoleon in that it opened the road to his occupation of Moscow, it proved to be a hollow victory.  The Russians could afford losses in men and materiel; the French could not.  And even when Napoleon actually entered the city, he could do nothing with it; Alexander had ordered everything to be burned or destroyed.  The retreating Russians set fire to the city, which burned in a tremendous conflagration; the French shot as many arsonists as they could lay their hands on, but it was not enough.  As Napoleon watched from a window in the Kremlin on September 16, the night was illuminated by fires set all over the city; the heat was so intense that the window panes were hot to the touch.

Napoleon would later say, “[W]hen I got to Moscow, [I] considered the business as done…[The burning of Moscow was] an event on which I could not calculate, as there is not, I believe a precedent for it in the history of the world.  But by God, one has to admit that it showed a hell of a strength of character.”  In this he was correct; yet it was a lesson that would be forgotten by another invading army 129 years later.  He gave the final order to evacuate the burned city on October 19; and before leaving, almost as an act of rage and frustration, he ordered the Kremlin to be blown up.  It was an act of futility and rage.  But it did not matter; the invasion of Russia had finished both him and his Grande Armée.  His own hubris–and General Typhus–had seen to that.

Learn more about hubris and character in my bold, ground-breaking new translation of Sallust’s The Conspiracy of Catiline and The War of Jugurtha:

2 thoughts on “The Victory Of General Typhus: Napoleon’s Catastrophic Invasion Of Russia”