Skip to content
HomeThe Wisdom And Character Of Athanasios Of Athos 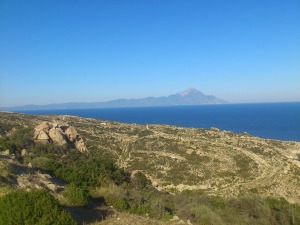 Of all the great and sanctified names of Mount Athos, few inspire more veneration than that of Athanasios.  He lived from about A.D. 925 to 1001, and occupies a central place in the development of the monasticism there.  As a young man he was a teacher and scholar in Constantinople, and mixed with the upper classes of that great city; he knew personally the Byzantine emperor Nicephoras II Phocas and served as his spiritual advisor.  But at some point he underwent some kind of conversion experience, and abandoned his old life to pursue the road of religion.  This pattern is not unknown among great holy men; we find it often repeated in the histories of the world’s great faiths.

He moved to Mount Athos around 957 and worked long and hard to build the community there.  In reading the account of his life that has come down to us, I was struck by how much he behaved like a good military commander.  Perhaps monks and soldiers are two sides of the same coin.  Athanasios never gave any orders that he himself did not carry out personally with his men.  When he punished his brothers for some transgression, he would himself suffer the same punishment.  As for physical labor, he was always the first to lift the heavy stones or logs.  He nearly crippled himself when a heavy log fell on his leg, crushing the bones of his femur and foot; that accident kept him off his feet for over a year.  He would eventually be killed in a construction accident in 1001 when the scaffolding inside the monastery’s main church gave way while he was using it for restoration work.  What leader today, we should ask, would be so selfless and tireless in his service to an ideal?

But it is his wisdom and knowledge of human nature that most impresses us.  He combined pragmatic leadership techniques with a deep sense of compassion; and he was so persuasive, and so endowed with charismatic gifts, that he could win over almost anyone he dealt with.  His medieval biographer, writing around 1100, tells us:

For he always used to say that this is the goal for every person who can do so: to take care of the body, recall the soul from the depths of despair, and bring forth the precious from the worthless.  For in the knowledge that idleness stirs up many passions in the soul, he did not let them merely eat and relax, but like a wise physician he assigned some of them to the kitchen to cut up vegetables, and he sent some of them to the refectory to slice the bread, and some to the smithy to hold the bellows and assist the workers, so that, by being forced to focus their attention there, they would be delivered from wicked thoughts and come to repentance.  [Trans. by Alice-Mary Talbot]

Occupied minds have little time for mischief, he knew.  This is a principle that is much deeper than it appears.  The turbulent soul needs to feel like it is taking action in some way; it needs to feel like it is advancing forward towards some positive purpose.  Father Athanasios knew how to use just the right balance of kindness and firmness to get the best out of his brethren.  One moving passage in the anonymous account of his life tells how, when one of his brethren died, he would stand before the body and shed tears into a metal vessel; then he would prostrate himself on the ground and offer prayers to God.  “Then, rising to his feet, he would stretch out his arms, offer many thanks to God, give [the deceased] the final kiss and entrust him to the grave.”

Many stories are told of his wise methods of handling his community.  His way revolved around certain fixed principles:  he would rebuke and exhort his men, bear their burdens with them, and adapt his style to each man he dealt with.  It was gratifying to learn that in this period Athos was often visited by Catholic clerics from Italy; political or theological differences were not important to men of sincere mind and expansive outlook.

When a novice was in need of being corrected, Athanasios knew that sometimes it was not a good idea to rebuke him directly.  Sometimes the soft touch worked better.  Instead, he would pretend to reproach one of the enlightened elders at Athos, a man whom he knew would be able to take criticism without hurt.  In front of others, he would say something like, “Aren’t you ashamed as an elder to be making the same mistakes as a novice would make?”  The novice would hear this, and would get the message in an indirect but effective way.  Usually the novice would then approach Athanasios and apologize to him, and beg his forgiveness.  “In this way,” says his biographer, “he achieved two very fine results:  for the novices were corrected through the patient endurance of the perfected ones, and the perfected ones bore the burden of the weak and thus fulfilled the law of Christ.”

Here is a story about Athanasios’s wise but forceful way of thinking.  Once some “Amalfitan elders” (presumably monks from the Amalfi region of Italy) paid a visit to Athos, and brought him a gift of the seasoning known in Latin as garum.  I was surprised to learn that this Roman condiment was still being made in the Middle Ages; it is kind of fermented fish sauce to which various spices have been added.  When the gift was received, Athanasios ordered his people to store it and bring it out at the next meal, when the guests would be eating with them.  But the cooks did not do this, and used a different garum that they themselves had prepared, instead of the garum from the Amalfi monks.  When someone complimented what he thought was the Amalfi garum, one of the Athos cooks said that he himself had made it.  When Athanasios heard this, he was very angry, for he had told the Athos cooks to use the gift that the Amalfi monks had brought.  He ordered that all the garum of this Athos monk to be poured out on the ground and destroyed; and “in this way he corrected his own disciple’s disobedience and chased away the sin of arrogance.”

Another story reveals the same qualities.  When one of his cooks took it upon himself to prepare a batch of honey cakes, Athanasios considered it too self-indulgent.  He was even more angered to see monks hoarding the cakes and fighting over them; he had a disgust for gluttony and thought it was a gateway to further moral corruptions.  He told his brethren:

How on earth have you gone so crazy that you disregard our ancestral traditions and bring disgrace on our communal way of life by impulsively seeking to eat these sweets?  Don’t you know that our forefather Adam was condemned to a life of toil on account of his impulsive eating from the tree?

Perhaps to us, the uninitiated, these rules seem unduly severe.  But we must remember that they were part of the monastic way of life, and we should not be too quick to judge by our own measures.

We must record one final trait of Athanasios that his biographer makes a point of recording.  This was the trait of clairvoyance.  Now I know that there are those who will scoff at such things; but here again, we should take care before passing judgment on the authenticity of such stories.  It may be that a life of contemplation and ascetic denial has the effect of sharpening the senses to a high state of acuteness, to the extend that such a man acquires powers that cannot be readily explained.  Here is the story.  One winter, Father Athanasios called one of his brethren to his cell; but he did not tell him why he had called him.  Athanasios was deep in contemplation, and nearly in a trance.  He spoke to this other monk, a man named John, and said, “Call Theodore the Hunter for me.”  When this was done, Athanasios told Theodore:

Go and have your midday meal; then take some food and run as fast as you can to Kerasea.  When you are opposite Chalasmata, head toward the sea and you will find three men sick with cold and hunger, one of whom is a monk.  So hurry now and reach them while they are still alive.  Help them recover, and bring them here with you.

Theodore did as he was asked, and found everything to be just as Athanasios had said it would be.  There was no way he could have known about this emergency, everyone believed, since he had been shut up in his cell for several days, and no one had spoken to him about it.  But he knew nonetheless.  I remember once when I was in Bosnia, I knew a Greek army officer who told me that he used to visit Athos on a regular basis, because he knew one of the monks there.  At times, the monk would be able to tell him things about his life that he could not possibly have known through conventional means.  The officer had no explanation for this; he believed it was evidence of divinely-inspired clairvoyance.

Read more in On Moral Ends, now available in hardcover, paperback, Kindle, and soon in audio: