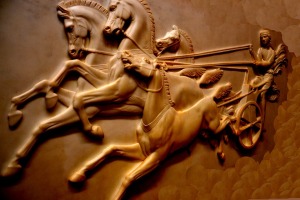 To understand fully the social environment in which the eastern Roman empire operated, we must have some grasp of the unique culture surrounding Constantinople’s Hippodrome in the centuries that followed the disappearance of the Roman empire in the west.  In Byzantium, sport and politics achieved a strange admixture that has no exact historical parallel anywhere else; sport influenced politics, and politics guided sport.  It was a peculiar world, but one that makes sense once we understand the conditions that existed at the time.  We begin with the arena itself.

END_OF_DOCUMENT_TOKEN_TO_BE_REPLACED

Many decades before 1453 (the year Constantinople finally fell to the Ottoman Turks), the Byzantine “Empire” had become a sad parody of its former self.  Mismanagement, bad leadership, and the inability of the old state to cope with the challenges of its strategic environment had fatally doomed it long before Ottoman cannon breached its walls.